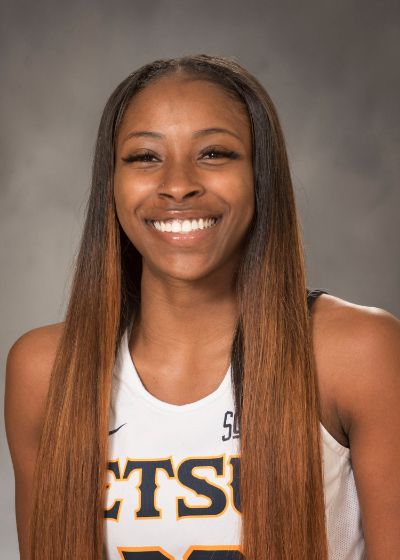 2019-20 Season (Junior): NCAA Team of the Week and Southern Conference Player of the Week for her performance during the opening week of the season...24th member of ETSU’s 1,000-point club, left the program as the 22nd-leading scorer in program history (1,046 career points)...Scored 41 points against the University of Tennessee in the Bucs season opener, second-most in single-game program history...In the same game, tied for the third-most single-game field goal makes (15) in the Buccaneer record book and set the single-game record for most field goal attempts (31)....Tied the program record for single-game free throw percentage (minimum 10 attempts) by going 11-11 versus High Point in the third game of the season...Suffered a lower-leg injury in the Bucs fourth game of the season versus North Carolina A&T and missed the ensuing eight games before entering the transfer portal...Left ETSU as the 7th-leading scorer in Buccaneer history on a per game basis, averaging 16.1 points per outing...Finalized her account with the Bucs sixth in the Blue and Gold’s history in career steals with 224.

2017-18 Season (Freshman): Played and started in 29 games as a freshman…averaged 14.5 points per game (2nd on the team)…made first collegiate debut in the home opener vs. Cincinnati, while recording 16 points and four steals (11/10)…scored 15 points at Appalachian State (11/15)…tallied 16 points, seven rebounds, and six steals against Tennessee Tech (11/16)…scored 21 points vs. Duquesne (11/19)…had 13 points and eight rebound against Notre Dame (11/24)…tallied 19 points and set an ETSU single-game record with 11 steals at Murray State, while recording her first collegiate double-double (11/29)…the 11 steals was an NCAA single-season record for some time, but finished tied for third in the NCAA single-season records…had 16 points at Winthrop (12/3)…named the SoCon Player of the Week (12/5)…had nine points and five steals vs. Michigan State (12/16)…registered a new career-high of 29 points and had eight steals against North Greenville (12/29)…had 14 points and seven steals against Western Carolina (1/4)…recorded her second career double-double with 13 points and 10 rebounds vs. UNCG (1/6)…recorded 21 points, seven steals and five rebounds vs. Chattanooga (1/12)…scored 24 points at Furman while playing in a complete 40 minutes of action (1/18)…scored the team-high 15 points and have five rebounds at Wofford (1/20)…named the SoCon College Sports Madness women’s basketball player of the week (1/22)…had 12 points and three steals at Chattanooga (2/10)…recorded her third career double-double with 13 points and 10 rebounds against Wofford and recorded a career-high six assists (2/15)…had 19 points against Furman (2/17)…named the SoCon Player of the Week for the second time (2/20)…scored in double figures in all but four games…finished sixth in the nation in steals per game and eighth in the nation in steals…tallied 108 steals as a freshman, which is first in the SoCon and first in ETSU single-season records…named the Defensive Player of the  Year…named the Freshman Player of the Year…named to the All-Freshman Team…named to the Second Team All-SoCon...named to SoCon All-Tournament Team.