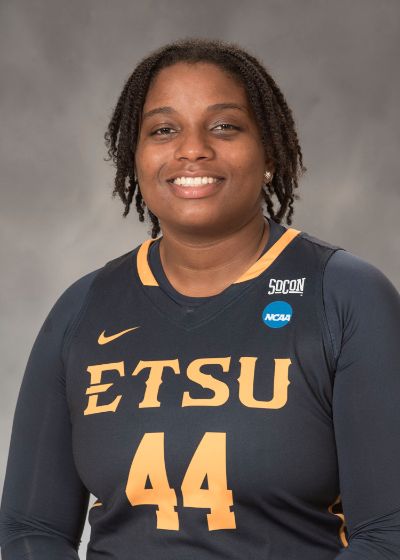 2016-2017 Season (Senior at UT Martin): Played in 13 games while starting in four…Averaged 13.9 minutes per game, 3.5 rebounds per game (third on the team), and 4.3 points per game…Made four three-pointers for the Skyhawks…Had a .800 free throw percentage…Recorded 10 steals…Finished the season with 56 points.

2015-2016 Season (Junior at UT Martin): Played in 24 games for the Skyhawks...Averaged 8.4 points, 4.6 rebounds, 1.4 steals and 1.3 assists in 18.4 minutes per game...Made her debut against Evansville, scoring four points while tallying an offensive rebound and a steal in her first 10 seconds on the floor...Eclipsed the double figure mark on 11 occasions, including a pair of 18 points performances against SIUE (Feb. 20) and Murray State (March 2) in the OVC Tournament semifinals...Posted her first career double-double with 10 points and 10 rebounds vs. Tennessee State (Jan. 27)...Scored 15 points or more five times...Tallied five rebounds or more on 10 occasions...Played career-high 29 minutes against Tennessee State (Jan. 27) and SIUE (Feb. 6)...Tallied career-high four steals against Eastern Illinois (Jan. 20).

2013-2014 Season (Freshman at Middle Tennessee State): Played seven games as a freshman...Had a season-best performance against Kennesaw State, logging seven minutes with a three-pointer, three rebounds, an assist and a block...Picked up a steal against Tennessee Tech...Played three minutes at Rice...Logged a minute each in wins over Marshall and East Carolina.

High School: Earned All-State honors as a senior while leading her Science Hill squad to a 35-4 record and a trip to the AAA State title game against Riverdale...Also received All-District honors in Region 1-AAA...Her team did not drop a game on their home court for the second-straight season, as the team went 15-0...As a junior, helped lead her squad to a 38-0 start before suffering an ACL injury before the AAA State Championship game and named MVP of 1-AAA and earned a spot on the All-Tournament team...Averaged 12.5 points per game and 6.3 rebounds...Named a member of the Tri-Cities All-Big 8 team in 2012.

Personal: Born March, 21. 1994...Daughter of Damon Johnson and Telisha Copney...father Damon played basketball at the University of Tennessee and also played professionally overseas for 13 years...Majoring in Brand and Media Strategy...Chose ETSU because of the great grad program.