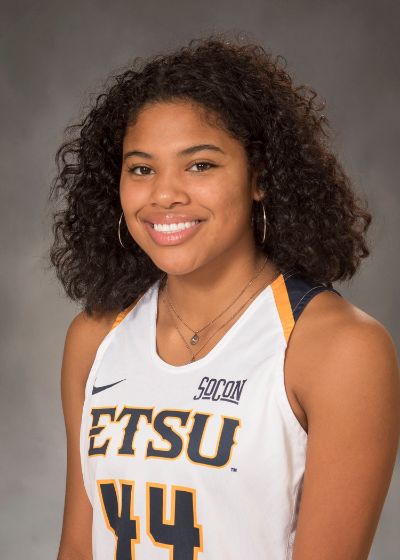 2020-21: Started in five games while featuring in all 20 contests for the Bucs…was nominated to the Preseason All-SoCon Team…averaged 6.1 points per game for ETSU…scored seven points against both Tennessee (12/1/20) and Vanderbilt (12/8/20)…grabbed her first double-digit performance of the season against Wofford (1/16/21), playing 33 minutes while scoring 17 points on 6-13 shooting…scored 10 points in the first game against UNCG (1/22/21)…helped the Bucs upset #1 Samford in the SoCon Tournament with a five point, six rebound performance.

2019-20 Season (Sophomore): Appeared in all 30 games while starting 29...Second amongst qualifying Buccaneers in scoring average, booking 10.7 points per game while boosting that mark in league play to 12.9, tied for 10th in the conference during SoCon games...4.2 rebounds per game was third on team amongst qualifiers, while 19 blocks was good for second amongst Bucs....In her first career start, the season opener against the University of Tennessee, logged her first career double-digit scoring game, dropping 13 points while snagging six rebounds...Would go on to score in double-figures in half of the Bucs 30 games, including a career-high 29 points against Western Carolina, a game in which Stafford made six three-pointers, tied for the fifth-most in a single game in Buccaneer history, and 11 total field goals, tied for eighth in the single-game Buccaneer record book......Made a team-best 42 three-pointers, including 26 of her 61 attempts during Southern Conference play, the 42.6 percent conversion rate during league games pacing SoCon shooters...Increased her efficiency from the field greatly during Southern Confernece games, making 47.6 percent of her field goal attempts to raise her percentage on the year to 40.9...Career-high 10 rebounds against UNC-Asheville, a game she also had 10 points, her lone double-double of the season....Career-high five steals versus Wake Forest in the Bucs 67-60 upset of the Demon Deacons...Finished the season by making at least one three in 10 straight games.

2018-19 Season (Freshman): Appeared in all but four games in her freshman season with the Blue and Gold, claiming 18 points and 11 rebounds in 136 total minutes.

Personal: Born on October 19, 1999….Daughter of Teresa Stafford and DaMill Davis…Chose ETSU because of the people and the atmosphere she was surrounded by made it feel like home…Goal is to better herself and others in her time as a player...Majoring in nursing.