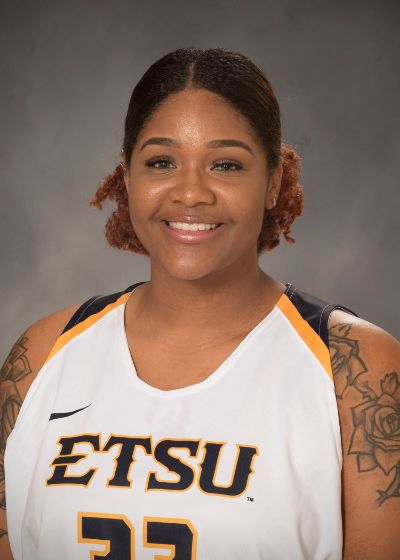 2018-19 Season (Graduate Transfer): Appeared in 31 games, starting seven, averaging 12.4 minutes per game on the totality of the season...Finished fourth on the team in points per game with 7.1, a 23 points per 40 minutes average...Finished second in the Southern Conference in field goal percentage at 59.8, while ranking second amongst Bucs in blocks with 18...4.1 rebounds per game was fourth on team...Scored in double-figures eight times in her lone year donning Blue and Gold including 21 points against Houston, her most in her time in Johnson City...Explosive scoring ability was on display in the Bucs Valentine’s Day matinee against Wofford, Spears making all seven of her field goal attempts on her way to 17 points in just six minutes of time on the floor.

2017-18 Season (Senior at Morgan State): Named to the All-Mid-Eastern Athletic Conference (MEAC) Second Team…Started in all 29 games…Led her team in scoring with an average of 14.1 points (7th in MEAC), field goal percentage at .540 (1st in MEAC), and recorded a team-leading 20 blocks…Totaled 36 steals and six assists on the season…Reached double figures in scoring 24 times, including the last 11 games to cap off the regular season…Tallied three double-doubles and five 20-point games, including a career-high of 16 rebounds…Three-time MEAC Player of the Week…Three-time College Sports Madness MEAC women’s basketball player of the week…Named the Team MVP….Reached the 500 rebounds club.

2016-17 Season (Junior at Morgan State): Started all three games she played before suffering a season-ending injury…Averaged 7.7 points and 4.3 rebounds per game…Totaled 23 points, 13 rebounds, three steals, two blocks and two assists…Finished with three rebounds, two steals and two points against Eastern Kentucky (1/25) in the opener of the Plaza Lights Classic…Scored six points on 3-of-5 shooting, grabbed six rebounds and had an assist in a season-high 18 minutes of play at Saint Louis (11/23)…Connected on 7-of-10 shooting for a season-high 15 points, recorded four rebounds, two blocks, an assist and a steal in the home opener against Washington Adventist (11/17)…Named the Team Most Improved.

High School: Was a two-sport letterwinner in volleyball and basketball while at North Chicago High and Sandalwood High, respectively…Spent her freshman year at North Chicago High, where she was coached by Ed Wrather in volleyball and Lawrence Brown in basketball...Transferred to Sandalwood High in Jacksonville, Fla., where she played both volleyball and basketball during her sophomore and senior seasons…Helped the Saints’ volleyball team to a 15-3 overall record and a second-place finish at the district championships as a senior…Totaled 307 kills and 100 blocks in her final season…Voted team MVP and earned All-Gateway Conference first team honors…Voted to the All-First Coast team by The Florida Times-Union…Coached by Carlyce Cononie…Averaged 10 points and seven rebounds per game as a senior for the Saints’ basketball team…Helped the team to a district title and a Florida Class 8A Regional semifinal appearance…Voted team MVP as a sophomore and senior…Garnered first-team All-Gateway Conference honors…Was coached by Damon Murphy.

Personal: Born on December 24, 1995 in Jacksonville, Fla….Daughter of Duane and LaTonya Spears…Earned her bachelor’s degree in sociology with a minor in criminal justice…Currently earning her master’s degree in criminal justice/criminology…Career ambition if to work for the FBI or become a special victims detective…Chose ETSU because everything felt natural and extremely family oriented.