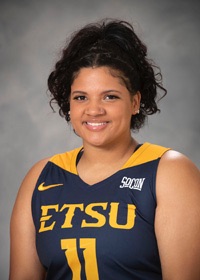 2018-19 Season (Junior): In first season at ETSU appeared in 20 games, all as a reserve, knocking down seven three-pointers as one of the most feared perimeter shooters on the Buccaneer roster.

2016-17 Season (Sophomore at Richmond): Scored six points against William & Mary in 16 minutes of action…Career-best three rebounds vs. Morgan State…Scored five points in 18 minutes vs. George Mason on 2-5 shooting…Scored in each of her final four appearances of the season…Career-best eight points on 2-6 shooting from deep against Rhode Island…Dropped in five points in a road win at George Mason.

2015-16 Season (Freshman at Richmond): Made her first appearance of her career against James Madison (12/13)…Scored her first basket at Appalachian State (12/17)…Had her breakout performance at Virginia where she scored 14 points on 5-7 shooting and 4-6 from long range…Scored six points opposite against Rhode Island in 15 minutes of action…Canned six points on 2-3 from deep at St. Bonaventure (1/31).

High School: Rated No. 3 point guard in North Carolina by LEH Hoop Report…Two-time All-Great Neuse River Conference Player in 2013…Led her team to the third round of the NC 4A playoffs in 2013…Team leader in scoring, assists, and free throw percentages in 2015, reaching 30+ points in six games…Transferred to Clayton after winning conference championship at Ravenscroft School (Raleigh) as a freshman…Played four seasons for Brent Murphy and Blue Star Carolina AAU program, averaging club-record 25.5 points per game in the summer of 2014…Ranked 75th nationally at her position by ESPN Hoopgurlz...Holds the record for the most free throws and free throw attempts in a season (513/612), most assists in a season (298), and most three-pointers made in a single season (205) at Clayton HS.

Personal: Born on January 20, 1997 in Clayton, N.C….Daughter of Brenton and Laura Murphy…Her uncle, Octavus Barnes played football and basketball at UNC-Chapel Hill, while spending five years in the NFL for the Atlanta Falcons and Carolina Panthers…Her uncle Steven Sosa played semi pro soccer…Her cousin Quinton Ray played men’s basketball at Campbell University from 2013-17…Her father Brenton, played men’s basketball at Western Texas JC from 1991-92 and at UT-Pan American from 1992-95…Majoring in interdisciplinary studies…Chose ETSU because of the coaching staff and she felt at home when she came to visit.