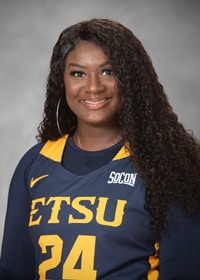 2019-20 Season (Senior): Did not play due to accumulation of upper-body injuries.

2018-19 Season (Junior): Battled through an injury-plagued year to appear in 15 games, starting six, while averaging 2.8 points and 1.6 rebounds per game...Scored a season-high nine points on 4-of-5 shooting in the season opener against Cincinnati.

High School: Was named to the 2015 Class AAA All-State team along with earning 2AAA All-Region and 4AAA All-District honors …. during the 2014 state tournament, Stephney averaged 19 points and 9.5 rebounds in two games … during her high school career, averaged 12 points, nine rebounds per game while 48 percent from the field.

Personal: Born on August 2, 1998…daughter of Prince McClendon and Lukrisha Stephney…Brother Trent Stephney enters his freshman season at UNC-Asheville in 2019-20 as part of the men's basketball team...Has six siblings...Chose ETSU because of the beautiful scenery, the coaching staff, and the hopes of becoming a Southern Conference champion...Interdisciplinary Studies major that has made the Dean's List five of her first six semesters in Johnson City.