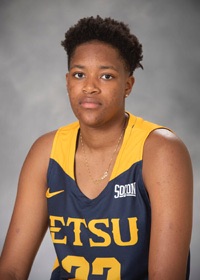 2019-20 Season (Junior): Appeared in 29 of the 30 Buc contests throughout the year, averaging seven minutes per game...Led all Bucs by shooting 52.4 percent from the floor, her lone double-figure scoring effort coming against Division II Converse College as she piled up 11 points and seven rebounds, both Division I career bests...33 points, 43 rebounds and seven steals on the season.

Prior to ETSU: Averaged 6.2 points and 7.0 rebounds in 26 career games (15 starts) at Georgia Highlands College.

2018-19 Season (Sophomore): Totaled 5.5 points and 7.2 rebounds in 16 games (seven starts) for the Chargers, posting a double-double against Eastern Florida State where she finished with 10 points and 13 rebounds, while also having a 9-point, 14-rebound performance against Andrew College in January 2019...Overall, Perdue totaled at least nine rebounds in six of her 16 games played, grabbing at least seven boards in eight contests this past season...Perdue helped guide the Chargers to a 20-win season in 2018-19, while also earning a spot in the JUCO Top-40 All-Star Game.

2017-18 Season (Freshman): Started 8 games, appearing in two more off the bench while averaging a career-best 7.2 points per game.

Personal: Born August 10, 1999...Daughter of Bobby Perdue and Alicia Smith...Chose ETSU because she immediately felt like she was part of a family...Anticaptes she will major in art.