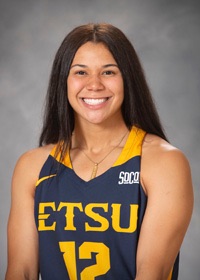 2019-20 Season (Junior): Appeared in all 30 games, averaging 12.5 minutes per outing...Scored 38 points, snagged 63 rebounds and posted an assist-to-turnover ratio of better than 2-to-1...Scored Division I personal best five points versus Samford Feb. 20...Played a Division I personal best 25 minutes and pulled in 10 rebounds while distributing three assists against Mercer, helping to spark the Bucs come-from-behind 56-54 victory over the Bears.

Prior to ETSU: Spent her first two collegiate seasons at Pearl River Community College in the Mississippi Association of Community & Junior Colleges (MACJC), posting game-highs of seven field goals, six three-pointers, and 25 points in her time with the Wildcats.

2018-19 Season (Sophomore): Selected to the MACJC All-Star Team with averages of 19.9 minutes, 7.2 points, 4.3 rebounds and 1.4 assists per game in 25 contests for the Wildcats...Tied a season-high 20 points – going 6-for-8 from beyond the arc – on Jan. 19, 2019 against Baton Rouge CC...One month earlier Brown established the career-high of 20 by going 5-for-11 from three-point range while snaring seven rebounds against Gadsden State CC.

High School: Brown played for her parents Don and Stephanie Brown at Choctaw High School, leading her school to an 18-5 record and a regional semifinal appearance during her senior season.