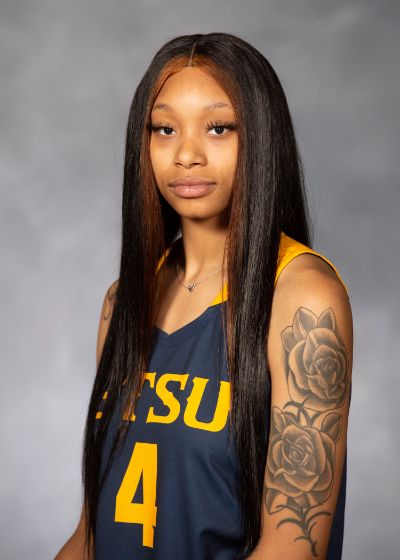 2019-20 Season (Redshirt Junior): Appeared in 28 games, starting three in her first year as a Buccaneer...Averaged 19.9 minutes per game, shooting 41.3 percent from the floor, scoring 5.4 points per game while ranking second in rebounds with 156 on the season and pacing the Blue and Gold in blocks with 50, the third most in single-season program history...Five double-digit scoring games, posting a Division I personal best with 11 points against Davidson and South Alabama...Three double-digit rebounding games including a Division I personal best 14 against Troy...From Nov. 30 to Jan. 18 averaged nine points and eight rebounds per game...Rejected multiple shots in 16 of the 28 games she played in, finishing second in the Southern Conference with 1.8 blocks per game...Career-high four blocks against UNCG in the Bucs conference opener and three weeks later at Brooks Gym against Chattanooga.

Prior to ETSU: Attended Northwest Florida State and Hutchinson Community College in the years leading up to her Buccaneer debut.

2018-19 Season (Redshirt Sophomore): Helped guide Hutchinson to a 33-4 record and a trip to the NJCAA National Semifinals, totaling 45 blocks, which ranked 39th nationally, and shooting 51 percent from the field...Registered a double-double (11 points/11 rebounds) against Colby Community College on Feb. 16, amassed 13 points (6-of-10 from the floor) and nine rebounds versus Allen County on Jan. 5 and posted a 14-point (5-of-8), 7-rebound game against Northwest Kansas Technical College on Jan. 14.

2017-18 Season (Redshirt Freshman): Transferred to Hutchison Community College and sat out as a redshirt due to an injury.

Personal: Born October 1, 1998...Daughter of Shamika Griggs...Chose ETSU because it felt like home and she believes she can help the Bucs win a championship...Plans to major in nutrition, and accordingly, loves Aquafina water.