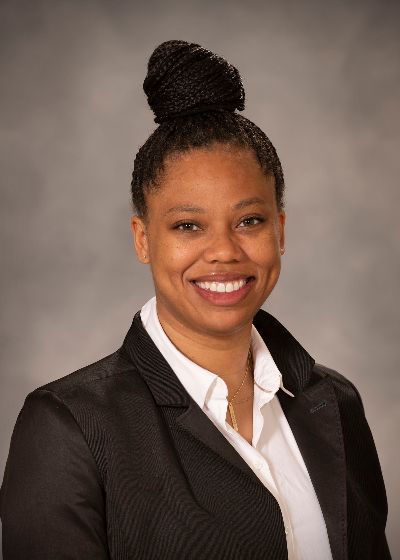 Adria Crawford enters her first season as a Buccaneers’ women’s basketball assistant coach under the Simon Harris era. Crawford has spent the entire nine years of her coaching career surrounding Tennessee prior to accepting this position. Over Crawford’s career she has had stops at Longwood University, College of Charleston, and most recently Marshall University.

“I am beyond excited to work with Simon. He is a relentless worker and brings out the best in people and is genuinely one of the best people in this profession,” Crawford sahred when asked what drew her to ETSU.

At Marshall University, Crawford served as the recruiting coordinator and assisted in bringing in a 2019 class that was ranked Top 60 Nationally. During her time there, Marshall earned just its fourth postseason bid with an appearance in the WBI in 2019. Throughout time spent in Huntington, WV, Crawford focused on the Herd’s post player development, off-court player development and served as a liaison for Big Green as the director of the Locker Room Club, Marshall’s Women’s Basketball donor club.

Crawford came to Huntington after four years on staff at College of Charleston where she was responsible for developing the team's post and wing players, three of which graduated and played professionally overseas. She was also very instrumental in handling the day-to-day operations of the program's academic and compliance efforts and directed the team's summer basketball camps.

Before Charleston, she was on the staff at Longwood, where she was involved in all aspects of the Lancers' program, including both on- and off-campus recruiting, opponent scouting and game-plan preparation. At the time of her hiring, Crawford was one of the youngest assistants at the Division 1 level after turning 22 a week prior to starting at Longwood.

Prior to her time with the Lancers, Crawford was a four-year member of the women's basketball team at Georgetown University where the Hoyas reached three NCAA Tournaments, including an appearance in the 2011 Sweet Sixteen.

While on The Hilltop, Crawford helped lead the Hoyas to a 23-9 overall mark in 2011-12, capping off an incredible performance for the winningest class (96 wins) in program history. Crawford started 19 of 31 games her senior season, while earning BIG EAST All-Academic honors. She finished her storied career second all-time at Georgetown with 131 games played and in the top 15 in career rebounds (646), blocked shots (61) and steals (174).

A native of Alexandria, Va., Crawford earned Bachelor of Art degrees in sociology and theology from Georgetown in 2012 and is currently working on her master’s in Digital Strategy at University of Florida.

Coach Crawford is ready to hit the ground running in Johnson City. “I know this program is headed in the right direction with Coach Harris as its leader and I am ready to embark on this journey with the rest of the staff. The energy of Johnson City is special and I am elated to take part in it.”