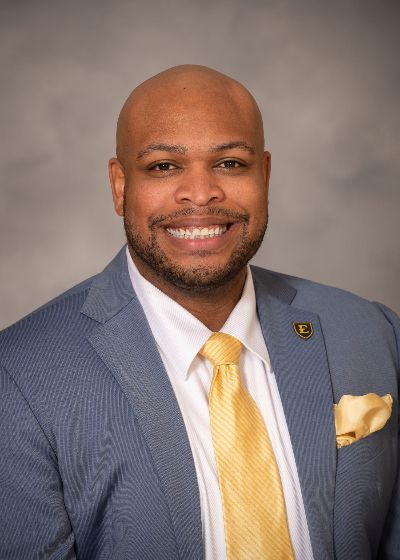 “I am so excited to welcome Coach Simon Harris as the next head coach of our ETSU women’s basketball program,” said Carter. “His energy, incredible personality and tremendous basketball knowledge will provide the winning edge for the young women in our program. Coach Harris has built relationships throughout the country and everyone that I have spoken with raves about his quality as a coach, but most importantly as a person. He is an authentic leader and I am so proud that he is our coach.”

Coach Harris is ready to lead the Buccaneer women’s basketball program and be a part of the ETSU family.

“I could not be more excited for this opportunity to join the family at ETSU and the surrounding community,” said Harris, who was named a top women’s basketball assistant coach ready for a head coaching job by Advancement of Blacks in Sports. “I am very grateful towards Dr. (Brian) Noland and Mr. (Scott) Carter for their confidence in me to help guide the Buccaneer women’s basketball program. I am very appreciative to be able to embark on this journey!”

In his one year at Ohio State, Harris helped build the Buckeyes into one of the top offensive teams in the country. Ohio State ranked ninth in the country in scoring and field goal attempts per game, while also ranking 20th in pace of play. The Buckeyes, who averaged 80.2 points per game and 66.8 field goal attempts per contest, had five players average double figures in scoring – only one of three Power 5 programs to accomplish the feat.

Harris enjoyed a successful run at NC State where the Wolfpack generated some of their best results in program history. In two seasons at his alma mater, Harris saw NC State post an .848 win percentage, make back-to-back NCAA Tournament appearances, including a Sweet 16 run in 2019, and capture the 2020 ACC Tournament, the program’s first conference tournament championship since 1991.

During the 2019-20 season, the Wolfpack finished eighth in the AP Top 25 Poll as they went 28-4 overall and 14-4 in ACC play. In Harris’ first season, NC State recorded its best start in program history by winning 21 consecutive games – the longest undefeated record in NCAA Division I that season – en route to finishing 28-6 overall and No. 10 in the country. The Wolfpack advanced to the Sweet 16 for the 13th time in program history with wins over Maine and No. 17 Kentucky. At the conclusion of the 2018-19 campaign, Harris saw Kiara Leslie selected 10th overall in the WNBA Draft.

Harris began his coaching career at Dayton where he spent three years with the men’s program, before accepting an assistant coaching spot on the women’s staff from 2014-18.

In his four years with the women’s program, Dayton went 87-39, while winning two Atlantic 10 Conference regular season titles (2017 & 2018), the 2017 A-10 Tournament Championship and made three trips to the NCAA Tournament, including an Elite Eight appearance in 2015. During the Elite Eight run, the Flyers defeated No. 10 Iowa State, No. 2 Kentucky and No. 3 Louisville. Harris also played a key role in recruiting, which featured three ESPN Top 100 commitments in the 2016 class. On the court, Harris saw Ally Malott taken eighth overall in the 2015 WNBA Draft and Saicha Grant-Allen selected in the third round of the 2017 Draft.

With the men, Harris was a graduate assistant/player personnel director under head coach Archie Miller. Dayton made two postseason appearances during Harris’ time with the program – a NIT trip in 2011-12 and an Elite Eight appearance in 2013-14. During those three seasons, he helped with the development of front-court players and also worked on advanced scouting for the coaching staff. Harris was involved with the underclassmen recruiting process and worked with high school freshmen and sophomores.

Harris played collegiately both at Elon and NC State. He finished his career with the Wolfpack where he was a senior captain in 2008. Harris graduated with a bachelor’s degree in sociology. Following his collegiate career, Harris played one season of professional basketball in Ireland and also attended rookie camp with the Dallas Cowboys in the summer of 2010.

Harris is the son of Stacey and Larry Harris. Coaching runs in the family as his father was a collegiate basketball coach for 27 years with stops at Duquesne, Oregon State, Washington State, NC State (1996-2011) and Rhode Island.