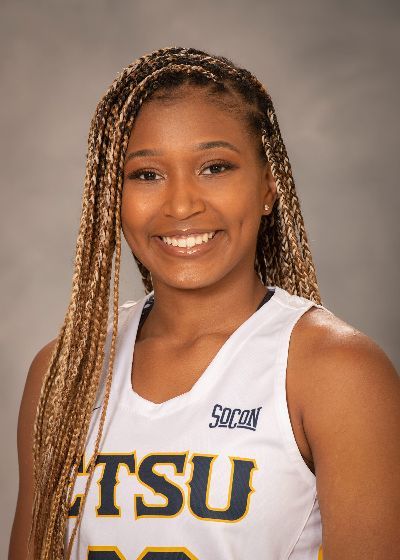 Prior to ETSU: Played in 69 games at UT Martin, starting in 22 games…averaged 7.4 points per game in her three seasons…secured 230 rebounds in her college career, while shooting 46.1% from the field…proved to be strong at the foul line, shooting 76% from the charity stripe…grabbed 72 steals in her time as a Skyhawk…scored a career-high 25 points against #6 Louisville in December of 2019, also grabbing a career-best 10 rebounds…averaged 13.6 points and 4.4 rebounds in five games against SoCon competition for UT Martin…two-time OVC Freshman of the Week…OVC Commissioner’s Honor Roll (2019-20)…four-time recipient on the Athletic Director’s Honor Roll.

High School: Graduate of White Station High School…helped lead her Lady Spartans to a 26-4 record and a District 16AAA title…averaged 9.6 points and 4.5 rebounds as a senior…selected to the Commercial Appeal’s All-Metro team…averaged 16.0 points and 8.0 rebounds per game…scored a career-high 39 points in a single game in her junior year…named to the AAA Commercial Appeal Best of Preps team.

Personal: Born on March 18, 1999…daughter of Henry and Lolissa Griffin…pursuing a master’s in Health Administration.