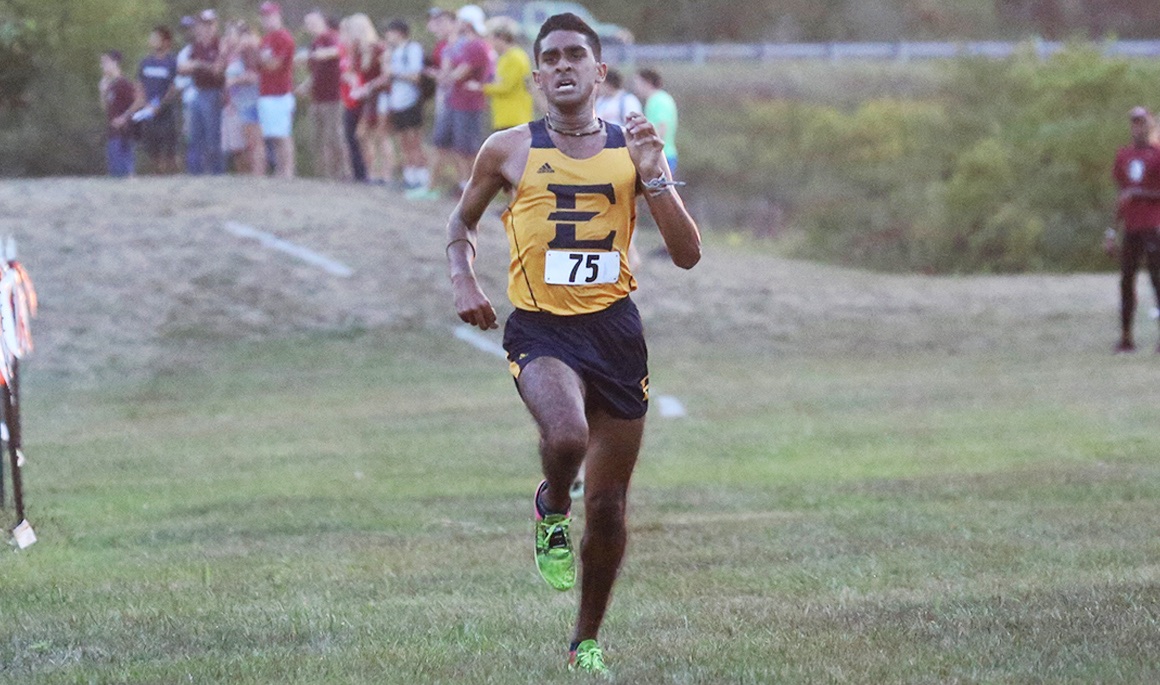 After being forced to sit an extra week to begin his season, Varghese claimed his first collegiate cross country win on Friday evening, as the Buccaneer junior claimed the Virginia Tech Alumni Invitational title with a time of 24:25.9 on the 8K run from the Buford Meredith Cross Country Course. The win was the first by a Buccaneer runner since Simeon Roberts (Greeneville, Tenn.) won the Catamount Classic back on Oct. 17, 2014.

Varghese, who didn’t run in the  Bucs’ season opener last month in Boone, N.C., was scheduled to make his 2019 debut last weekend at the USC Upstate Eye Opener. Unfortunately, Mother Nature flexed her muscle and postponed the meet due to inclement weather.

Varghese wasn’t unfazed by the delay and overcame the 66-man field to the win in Blacksburg on Friday.

The Buccaneer junior – coming off an appearance in the NCAA Championships a year ago – averaged a 4:54 mile en route to winning by five seconds over two-time All-American Kasey Knevelbaard of Florida State.

Varghese, who has recorded 10 top-five finishes in his collegiate career, helped guide the Blue and Gold to a third-place finish at the meet. Joining Varghese in the top-20 were the Johnson City duo of Malick Gemechu and Noah Charles. Gemechu – the Buccaneer leader in their season opener – placed 18th in 25:45.4, while Charles clocked in at 25:46.8 to finish in 19th. Senior Adam Bradtmueller (Sarasota, Fla.) made his season debut and crossed the tape in 25:52.4, good for a 22nd-place finish, and redshirt freshman Josh Krafsur (Fort Collins, Colo.) posted a career best with a time of 26:05.7.

"Personally, I am proud of myself of how I performed today – not only because I won but I didn’t let my mind get the best of me," said Varghese. "As the great distance-runner Eliud Kipchoge says, ‘If you don’t rule your mind, your mind will rule you.’ I am proud my anxiety didn’t rule me. I am proud I pushed past my discomfort when it was getting tough. And most importantly, I am proud that I recognize myself as a worthy human, winner or not.

"As a team we came into this race knowing we are capable group of runners. While we strive to win meets, today we settled for third. A positive from this meet is that we showed much bigger teams what we are capable of and what we can bring to the table. We still need to continue on improving, but for what we have done today, we did good. The road only gets tougher from here but we are ready for whatever storm hits us. Like my old mentor says we need to ‘Keep our eyes on the prize!’"

Overall, ETSU totaled 81 points for its third-place finish, while host Virginia Tech – the fourth-ranked team in the southeast region – won the meet with 30 points. The Hokies won by five points over Florida State (No. 2 in the south region). The Blue and Gold finished ahead of ACC foes Clemson (117 points) and Miami (183 points), along with American (131 points) and Radford (184 points).

“We had solid runs from both teams today,” said head coach George Watts. “Ben had a nice come-from-behind win against some good runners. Overall, it was obvious we haven’t raced in three weeks, but I am happy with our state of fitness and what we can accomplish going forward.”

On the women’s side, Makalya Shaw (Jonesborough, Tenn.) and Shila Kapaya (Knoxville, Tenn.) led the Bucs by finishing in 31st and 32nd. Shaw clocked in at 23:29 and Kapaya – the reigning Southern Conference Freshman of the Year – was right behind in 23:32.1.

The Bucs will return to action on Saturday, Oct. 5 when the Blue and Gold run in the Louisville Classic, which will be held at Tom Sawyer Park.