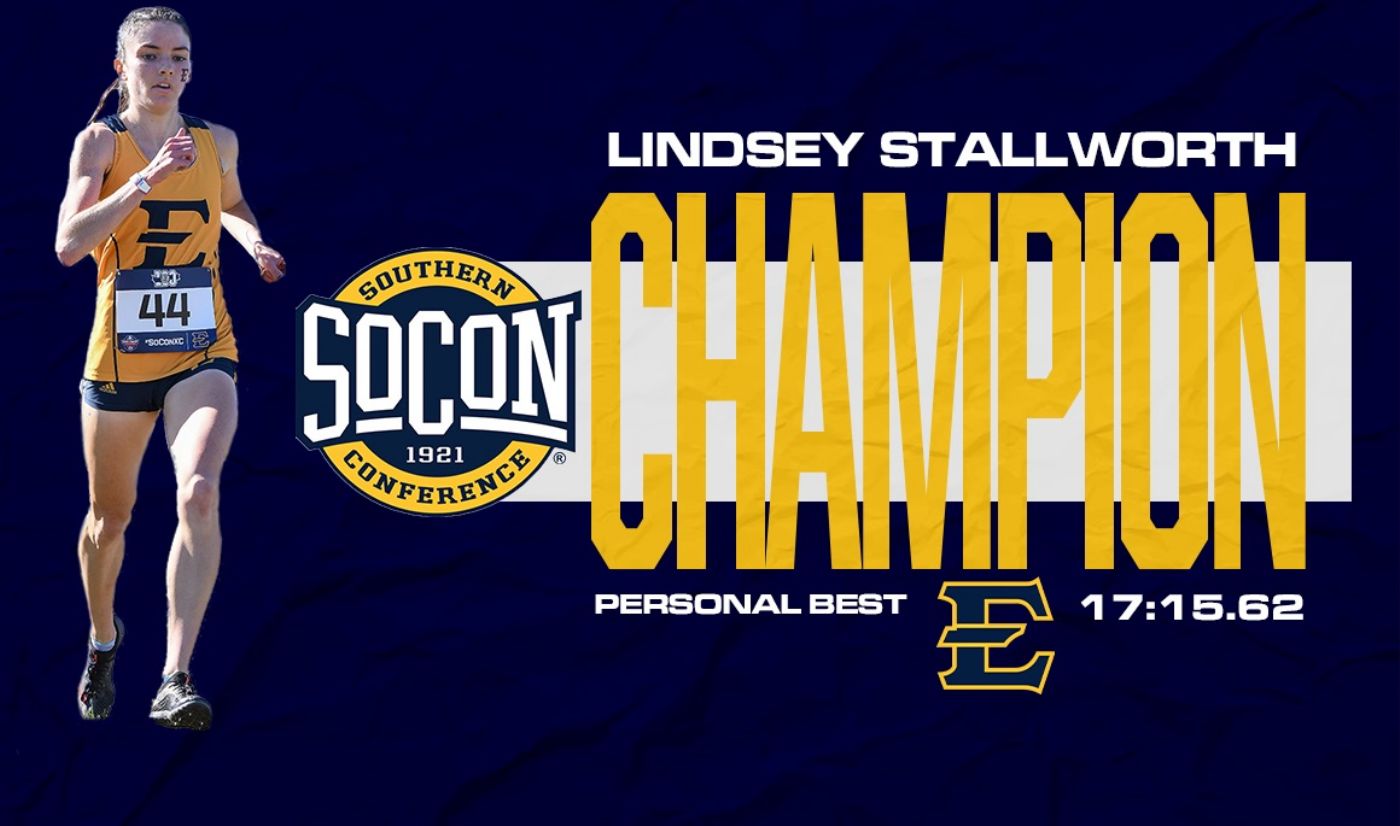 MACON, Ga. (Nov. 21, 2020) – ETSU’s Lindsey Stallworth (Knoxville, Tenn.) and Catherine (Berry) Layne already had a strong connection. It got even stronger on Saturday.

Stallworth joined her coach in becoming the only two Buccaneer runners in program history to win a cross country conference championship, as the Knoxville, Tenn. native won the 2020 Southern Conference individual title.

After missing the entire 2019 cross country season with an injury, Stallworth ended ETSU’s 23-year drought of not having a conference cross country champion as she captured gold with a time of 17:15.62 from the Georgia Premier Cross Country Course. Ironically, Layne’s individual title also came in The Peach State as she won her title in Statesboro back Nov. 1, 1997 with a time of 17:33.

“It was really cool moment to win the SoCon Championship,”  said Stallworth, who was named SoCon Runner of the Year at the post-race ceremony. “I want to thank my coaches and teammates for all of their support. I was nervous all week leading into the race, but being with my teammates and coaches, I just felt happy to be with them at the meet. Those nerves I had went out the window once we got to the meet and I felt the atmosphere. I couldn’t have done this without their support and it was special to share this moment with them because I am going to know them for the rest of my life.”

Stallworth snapped a streak of 8,422 days between her title and Coach Layne’s, while Stallworth’s time on Saturday was 18 seconds faster than her coach’s mark

“It was exciting to see Lindsey accomplish what she did today,” said Layne. “She ran extremely well and stuck to our plan. She went out with the lead runners and stayed close with them. Immediately, the top three runners broke away from the pack, and at about the 3K mark, Lindsey made her move and the other two runners didn’t respond. It was great to see her win as easily as she did.

“For both of us to be the only two individual conference champions in school history is really special since I was able to be her coach. It made today even more exciting. I told her she will always have her name in the record book and it’s a moment that you will cherish forever.”

"Lindsey Stallworth had a clear plan in mind and really dominated the race as she won by nearly 20 seconds," said ETSU Director of Cross Country/Track & Field George Watts. "Winning a conference championship is no easy feat and was made more impressive coming off a redshirt cross country season in 2019.  What a great story that she and Coach Layne are the only two women to have won a SoCon Cross Country Individual Championship."

At the beginning, Stallworth went out with the leaders, and roughly at the midway point, she broke away from the pack and never looked back.

“I got to the midway point and asked myself ‘How do you feel right now and I answered you don’t feel that bad,’” said Stallworth. “I was comfortable so I knew I could start building up to my move. I was expecting the runners to pick up then. I was feeling okay, went ahead and broke away. At that point I thought maybe it was too early. I told myself ‘You made the choice so stick with’ and that’s what I did. It worked out really well.”

Just three weeks ago Stallworth won her first collegiate cross country race – with then a personal best mark of 17:36 – when ETSU made its season debut at the Newberry Invitational, marking 722 days since her last cross country meet. On Saturday, Stallworth’s win snapped another long streak of 8,422 days since Layne’s win at the 1997 SoCon Championship.

“This was extremely special for me,” said Stallworth. “My teammates and I were talking earlier in the week about how this is our senior race. Even though I have another year of racing left, it hit me that today was our fourth conference meet and it sank in that I have been working with Coach Layne for four years. To have this moment and share it with her speaks volumes of how great of a coach she is. This would not have happened if she wasn’t my coach. She got me here and had a lot of faith in me.”

As a team, the Bucs placed third overall with 83 points, while Furman captured its eighthstraight conference championship with 28 points and Samford finished runner-up with 80 points. The Bucs’ finish was their best since the Blue and Gold won the 1999 SoCon Championship. ETSU also placed third in 2016 and 2017.

"We had a very solid day team-wise and a great day individually," said Watts. "Our women's team improved one place from last year and nearly finished second, falling short by just three points. I think both teams overachieved and that was clearly the case with the men as they showed some toughness with a third-place finish."

Junior Genevieve Schwarz (Oak Ridge, Tenn.) had her best showing in a SoCon Championship  as she finished 14th in 18:50.49, and freshman Kiera Snyder (Clyde, Mich.) – running in just her second collegiate race – placed two spots behind in 16th with an impressive mark of 18:52.92. Snyder shaved 35 seconds off her mark from her collegiate debut at Newberry. Makayla Shaw (28th overall/26 points) and Lindsey Holliday (30th overall/28 points) accounted for the Bucs’ other two scores.

Both Schwarz and Snyder earned all-conference accolades at the post-race ceremony. Schwarz landed a spot on the all-SoCon second team and Snyder made the all-freshman team.

“I was also very excited for both Genevieve and Kiera,” said Layne. “Genevieve ran an awesome race and to see what Kiera did in her first conference championship was impressive. This was not an easy course and they provided us with two strong performances. It was a fun day but this just shows we can get a lot better.”

On the men’s side, senior Matt Scarr (Wambersal, NSW, Australia) – who receive all-SoCon first team honors – paced the Blue and Gold as he finished sixth with a time of 25:04.43, which was 42 seconds faster than his mark three weeks ago at Newberry.

Furman swept both the team and individual titles as Daniel Bernal won the men’s race in 24:20.21, while VMI’s Jahanzib Shahbaz placed runner-up  in 24:23.74.

The Paladins totaled 20 points, while VMI registered 63 and the Bucs ended with 102.

Gavin Cooper (LaFollette, Tenn.) made the most of his SoCon Championship debut as he finished 11th with a time of 25:54.29, while freshman Myles Stoots (Mobile, Ala.) clocked in at 26:27.43 en route to placing 19thoverall. Following his outstanding effort, Cooper made second team all-conference honors.

"At conference meets you always have pleasant surprises and today was no exception as Genevieve Schwarz and Gavin Cooper had breakthrough cross country races today.  Congrats to them," said Watts. "Matt Scarr did a nice job leading the team today and throughout the fall in practice and at our two meets this season.  He had a huge improvement over last year that should carry over to a great indoor and outdoor track seasons. Kiera did a great job in her first Southern Conference Championship by earning All Freshman honors with her 16th place finish and was only two places out of making all conference.

"Both teams have a lot to look forward to for Fall 2021 and now is the time to begin that preparation by carrying the momentum into the track and field seasons."