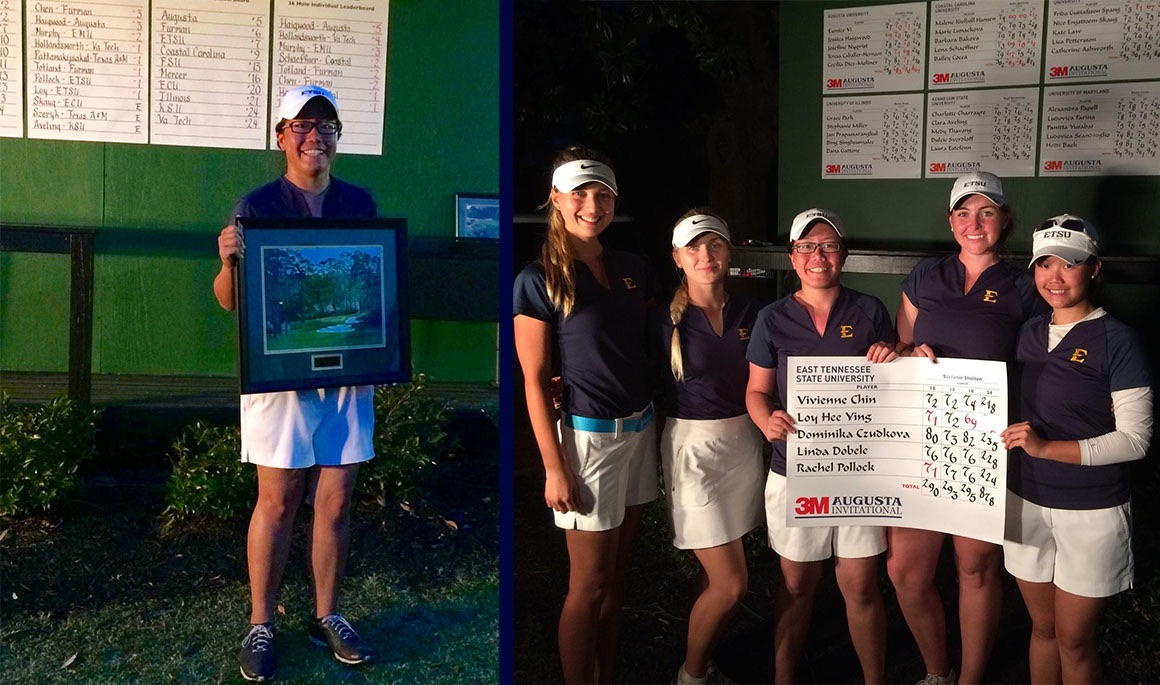 Augusta, Ga. (March 12, 2016) – Hee Ying Loy (Baru, Kulaijaya, Malaysia) carded a team-best 212 in the two-day tournament and finished one stroke out of first, and the ETSU women’s golf team finished fourth ahead of three top-ranked team in the nation at the 3M Augusta Invitational in Augusta, Ga. on Saturday.

Loy inked six straight birdies in her third round at Forest Hills Golf Club, which is the most consecutive birdies in ETSU women’s golf history. She recorded seven birdies from holes 7-14, and in the 36 holes played Saturday, she carded 12 birdies and 16 pars. Loy concluded her final two rounds shooting even and 3 under 69. She was just one stroke out of the first place No. 26 Frida Gustafsson Spang of East Carolina.

Vivienne Chin (Kota Kinabalu, Sabah, Malaysia) placed in the top ten after shooting 216 (72-72-74) by carding a combined 144 on Saturday. Dominika Czudkova (Cesky Tesin, Czech Republic) posted a 1 over 73 in her second round, and Rachel Pollock (Guelph, Ontario, Canada) scored a 4 over 76 to finish her outing at 224 and tied for 29th with No. 32 Maddie Szeryk of Texas A&M.

Linda Dobele (Ogre, Latvia) stayed the most consistent throughout the weekend as she carded three rounds of 4 over 76. Dobele shot six birdies in the two-day tournament at Forest Hills Gold Club.

Augusta made a run on day two as they jumped from tied 4th to 1st and held their ground as they shot 3 under 861 in the two-day tournament. ETSU finished three strokes behind SoCon foe and No. 33 Furman by three strokes after the third round.

ETSU will have 16 days off before their next outing in Kennesaw, Ga. Kennesaw State will host the Henssler Financial Intercollegiate on March 28 and will end on the 29.