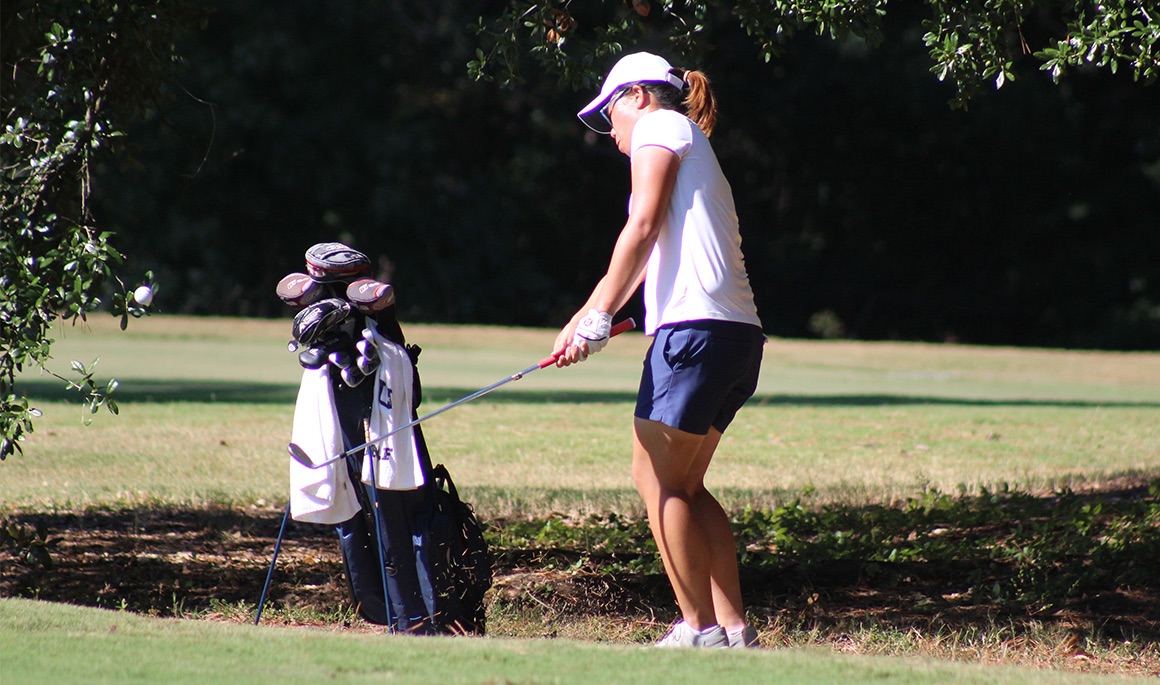 WALLACE, N.C. (March 9, 2017) – On Thursday, Sophomore Loy Hee Ying (Baru, Kulaijaya, Malaysia) and the ETSU women’s golf team sit atop of the individual and team leaderboards as Loy holds a five-stroke lead, and the Bucs have a two-stroke advantage over Penn State after the first day at the River Landing Classic.

As a team, ETSU outpaced the 11 participating teams as the Bucs currently hold a two-stroke lead over Penn State and a four-stroke advantage over co-host school No. 49 East Carolina. The Bucs shot even-288 in the first round with Loy leading the surge with a 7-under 65, which is a career-best for the sophomore. After the first 18 holes, ETSU saw itself on top of the leaderboard tied with Penn State.

However, the Buccaneer squad found some breathing room as ETSU shot an 8-over 296 to hold a two-stroke lead over the Nittany Lions. Leading the team in the second 18 holes was Dominika Czudkova (Cesky Tesin, Czech Republic) as she inked an even-72, and just behind the junior was Loy, who carded a 1-over 73.

Individually, Loy – who is ranked No. 90 in the country per GolfStat - leads all 74 participants as she sits in first with a 6-under 138 after the first 36 holes. In her first round, she started red-hot as she inked three birdies in the first five holes. The highlight of the day was when she drilled an eagle on hole 15, which is a 473-yard, par 5 hole. On the next hole, she sank another birdie to bring her score to 6-under. After sinking three straight pars, she sank her fifth birdie, and Loy finished her last five holes shooting even after she inked a birdie and a bogey.

In Loy’s second round, she finished the 18 holes with a 1-over 73 as she carded all three birdies in a span of four holes. She currently holds a five-stroke lead over Hailey Hrynewich of Ohio as Hrynewich shot even-72 in the first round followed by a 1-under 71 in the second.

Even with the number one individual on the leaderboard, ETSU has four golfers in the top-30 with Czudkova sitting tied for 11th at 3-over 147. Joining her in the top-30 is Rachel Pollock (Guelph, Ontario, Canada), Ankita Kedlaya (Bangalore, India), and Linda Dobele (Ogre, Latvia).

Czudkova shot 3-over 75 to open her Thursday outing, and she improved that score by three en route to an even-72 to lead the Blue and Gold in the second round.

Pollock had the second-best score on the team in the first 18 holes as she shot a 1-over 73 round. She recorded three birdies with all three coming within a span of six holes. The senior sits in a tie for 18th place on the individual standings.

Kedlaya recorded back-to-back 3-over 75s as she sank a total of five birdies on the first day of the River Landing Classic.

The final Buccaneer in the top-30 individual standings is Dobele as she sits tied for 28th at 7-over 151. She is in a four-way tie for the most pars recorded on the first 36 holes with 27.

Southern Conference rival Tennessee-Chattanooga is in fourth place as the Mocs sit seven strokes behind the Blue and Gold heading into the final round. The second co-host school – UNC Wilmington – is in fifth at 19-over 595.

ETSU will conclude the final round on Friday as the Bucs are paired with Penn State and East Carolina. The final round is a shotgun start with the Blue and Gold starting at 9 a.m. on holes 1 through 4.