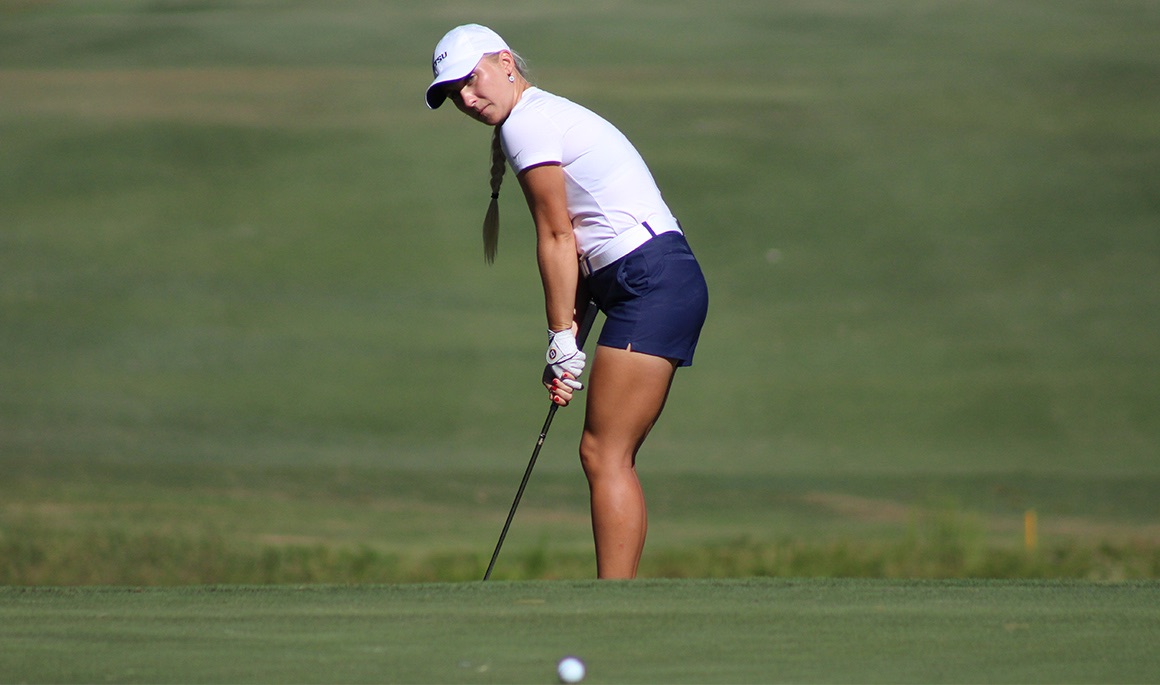 Linda Dobele sits in third place after shooting a 1-over 145.
Bucs "make it rain" after two rounds at the Web.com Intercollegiate
Related Links

ETSU leads the tournament by four strokes; Dobele and Loy are in the top-5 individually

PONTE VEDRA BEACH, Fla. (April 3, 2017) – After some rain and several lightning delays, the ETSU women’s golf team found itself at the top of the leaderboard with a four-stroke lead while senior Linda Dobele (Ogre, Latvia) and sophomore Loy Hee Ying (Baru, Kulaijaya, Malaysia) sit in the top-5 individually on Monday after the first two rounds at the Web.com Intercollegiate in Ponte Vedra Beach, Fla.

After playing 36 holes on Monday at the Marsh Landing Country Club, the Bucs are sitting in first place with a 22-over 598 after having some rain and several lightning delays. The Bucs shot the same score in the first round as they did in the second round – 11-over 299.

ETSU – who is ranked No. 77 in the country – holds a 21-stroke lead over No. 45 Campbell and a 22-stroke advantage over Southern Conference rival Chattanooga. The Bucs closest competition is Cincinnati who is four strokes behind the Blue and Gold after two rounds of play.

For the first time this season, ETSU has a pair of players on the individual leaderboard after the first two rounds of play. Dobele finished the first day at 1-over 145, which places her third in the standings. She inked an even-72 in the first round and followed that outing with a 1-over 73.

Loy joined Dobele as the sophomore sits one stroke behind her teammate in fourth place. Loy carded one of the best first rounds at the Marsh Landing Country Club as she penciled a 1-under 71, but her overall score dropped after shooting a 3-over 75 in the second round. Between the two Buccaneers, they sank 12 birdies with nine combined coming in the first round.

Dominika Czudkova (Cesky Tesin, Czech Republic) sits in the top-30 as she is tied for 28th at 10-over 154. Just one stroke behind the junior is freshman Ankita Kedlaya (Bangalore, India), who sits tied for 34th. After carding an 8-over 80 in her first round, she jumped 28 positions on the leaderboard after recording a 3-over 75 in the following round.

Host school Jacksonville University currently sits in sixth place, and the Dolphins improved six slots after improving eight strokes as a team from the first to second round.

Sasikarn Somboonsup of Texas State leads the Web.com Intercollegiate as she holds a four-stroke lead on No. 79 Camila Serrano of Florida International – who improved her second round score by ten strokes to sit at even-144. Serrano shot the lowest score of the tournament at 5-under 67 in the second round, and Somboonsup shot a 4-under 68 in the first round.

The final 18 holes of the Web.com Intercollegiate at the Marsh Landing Country Club is set to begin Tuesday at 8:30 a.m. with a shotgun start. The Bucs seek their first tournament victory since April 2014 when the Blue and Gold won the Atlantic Sun Conference Championships.

ETSU is paired with Cincinnati and Florida International, and the Bucs will start on holes 1-3.