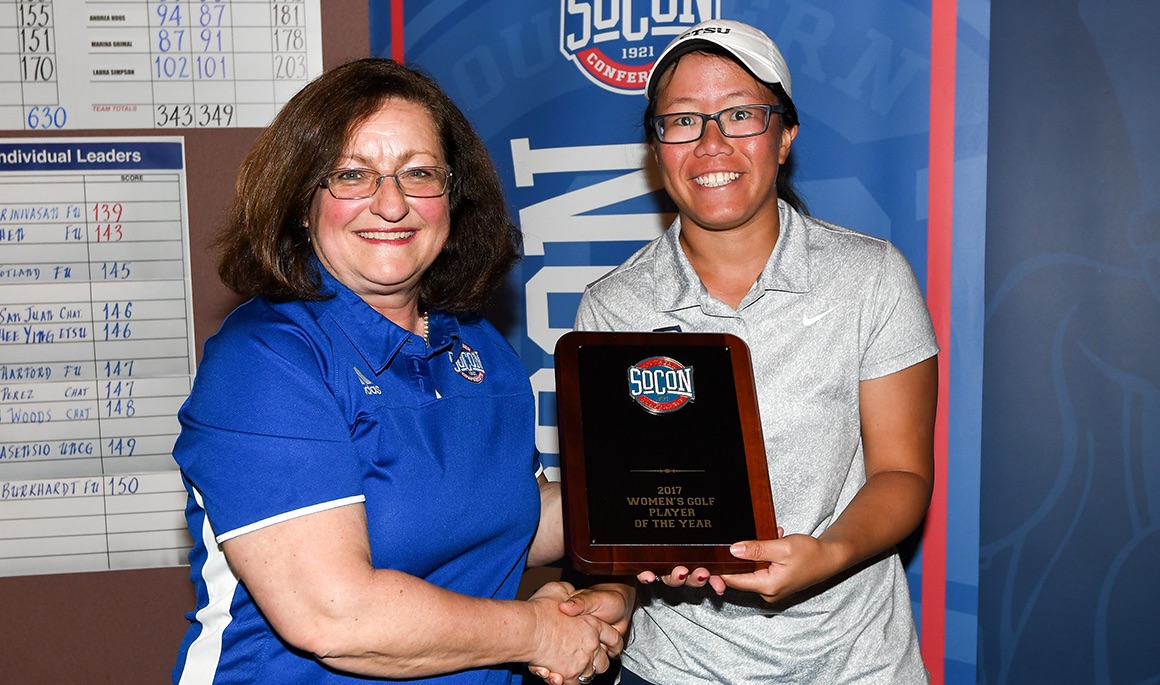 Loy finishes tied for fourth after the two-round outing

LEXINGTON, S.C. (April 25, 2017) – After canceling the second round of the Southern Conference Championships in Lexington, S.C., the ETSU women’s golf team finished in third place at 30-over 606 while sophomore Loy Hee Ying (Baru, Kulaijaya, Malaysia) placed tied for fourth at 2-over 146 in the wet conditions at the Country Club of Lexington on Tuesday.

As a team, ETSU finished the shortened event in third place by carding a 30-over 606, and the Bucs concluded the final round with a 17-over 305. The Bucs were ten strokes behind in-state rival Chattanooga and ahead of Mercer by nine strokes.

No. 10 Furman took home the team crown as the Paladins finished the outing at 8-under 568. With the team win, the Paladins earn the SoCon’s automatic bid into the NCAA Tournament, and it’s their third straight trip to the NCAA regionals.

After sitting in a three-way tie for first following the first round of the SoCon Tournament, Loy dropped into a tie for fourth place as she carded a 5-over 77 in the final 18 holes. She finished the rain-shortened event at 2-over 146. Loy was one stroke from moving into the top-3 and three strokes from tying Furman’s Alice Chen in runner-up status.

The finish was Loy’s seventh top-5 finish this year and eighth top-10 finish this season. She won a pair of first place titles and placed outside of the top-10 in only two events this year en route to her SoCon Player of the Year honors.

Senior Linda Dobele (Ogre, Latvia) recorded the best score for the Bucs in the final round as she inked a 1-over 73. She recorded the most pars on the team with 13 including sinking a pair of birdies, which was tied for the most on the squad. Dobele finished the SoCon Championships tied for 11th at 7-over 151. Just behind her was Dominika Czudkova (Cesky Tesin, Czech Republic) who carded an 11-over 155 in the two-round outing.

Senior Rachel Pollock (Guelph, Ontario, Canada) and freshman Ankita Kedlaya (Bangalore, India) both matched Dobele as each etched a pair of pars in their final 18 holes.

Furman’s Natalie Srinivasan took home the individual title as she concluded her outing at 5-under 139. She was the lone individual that shot a 2-under 70 or lower in both rounds. A trio of Paladins claimed the top-3 slots with Chen placing second and Taylor Totland finishing third.

After winning the SoCon Championships, Srinivasan was named the Freshman of the Year, and Furman’s head coach, Jeff Hull, was awarded Coach of the Year.