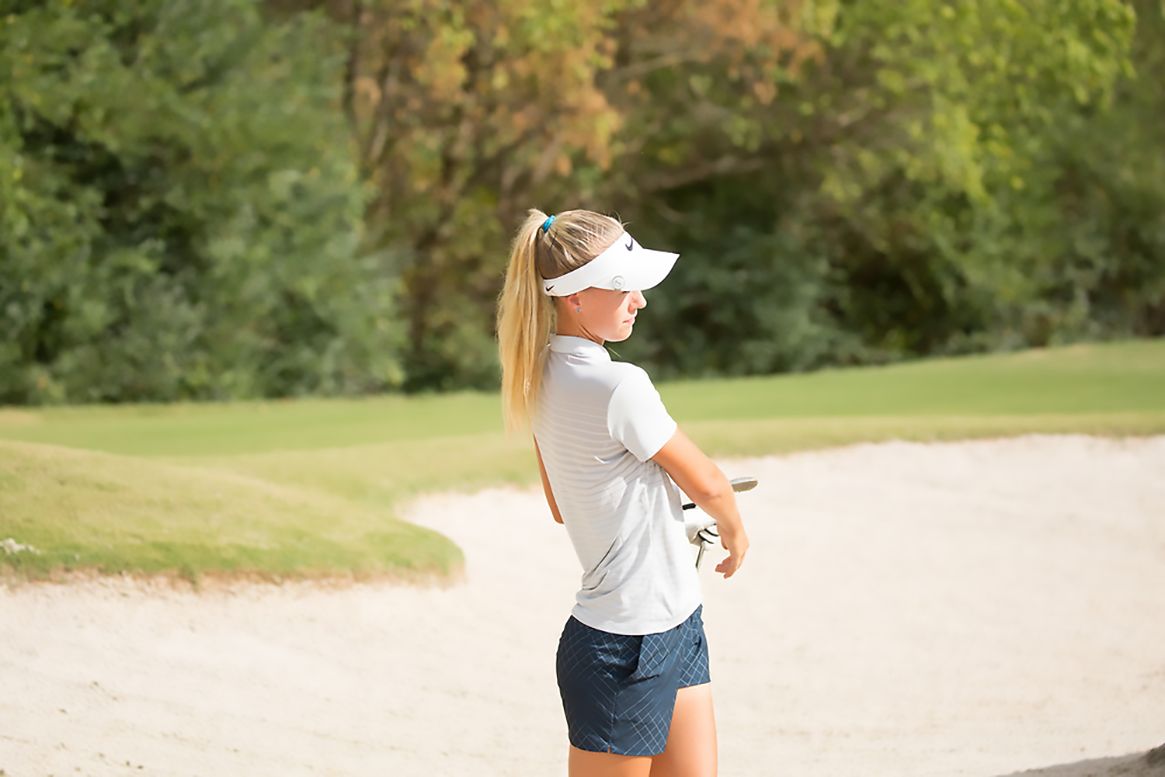 MACON, Ga. (April 8, 2019) – After more than three weeks without tournament play, sophomore Tereza Melecka (Belcovice, Czech Republic) and ETSU Women’s Golf buried any belief that they may be rusty, as Melecka burst onto the Brickyard Collegiate scene with back-to-back under-par rounds to lead the Bucs within five strokes of the team lead going to the final 18 holes of play in Macon.

“It was a great day for the team,” head coach Stefanie Shelton said. “Tereza posted two strong rounds positioning herself, and the team, to win this tournament.”

Melecka snapped off a 71 to start the event, and with one round to go on a busy Monday for the 13-team field, the Bucs No. 2 doubled down on her solid 1-under-par opening round by going low in round two, using four birdies to shoot a 2-under-par 70 and move into a tie for fourth place with just 18 holes to go on Tuesday.

Melecka, though, was not alone in her hot start.

Senior Hee Ying Loy (Johor, Malaysia), the only Buc to have played tournament golf in the last three weeks with her trip to the first-ever Augusta National Women’s Amateur concluding Friday, looked as consistent as can be, following a 71 with an even-par 72 on a day she made just two bogeys. Loy’s 1-under-par mark is one of just eight scores in red numbers after 36 holes, resting in a tie with North Carolina’s Mariana Ocano for seventh-place in the 71-player field.

Loy and Melecka, who own every top-15 individual finish the Blue and Gold have claimed in the 2018-19 year, were supported by two others within striking distance of joining that exclusive company.

Sophomore Warda Amira Rawof (Kuala Lampur, Malaysia), on the heels of back-to-back top-20 results, rattled off nine straight pars in her first round Monday, and while she never had a string of more than three in her second round, she still managed to offset an early double bogey with a pair of birdies, eventually logging a 75 to finish the day in a tie for 24th-place. Fellow sophomore Kornbongkoat Sararat (Nongkhai, Thailand) is right there with Rawof, matching both of her classmate’s scores by shooting 74-75 as she limited mistakes throughout most of the day to also snatch a tie for 24th.

Tallying up the Bucs four top-25 marks finds ETSU on the precipice of gaining their second top-three finish of 2018-19, trailing host Mercer by just five strokes for the top spot in the 13-team tournament, which shrunk from 15 early Monday with Florida State and Old Dominion pulling out of the loaded field before the 8:30 a.m. shotgun start. Between the Bucs and Mercer is Charlotte, whose 2-over-par team score is four strokes above ETSU and just one shot behind the Bears, while Coach Shelton’s squad has created a cushion between themselves and the rest of the field, seven strokes separating ETSU and No. 29 North Carolina, who finished Monday in fourth place.

“I believe we were ranked ninth in this tournament’s field entering competition,” Coach Shelton said. “There are many ranked teams here so we are very proud of our play and look forward to having the chance to come out tomorrow and continue it.”

Loy and Melecka will try to chase down Mercer’s Carol Pyon, whose 6-under-par score paces the field, while Sararat and Rawof look to secure their best collegiate finishes starting at 8:30 a.m.’s shotgun start, the Bucs paired with the only teams they trail, Mercer and Charlotte.

Live stats for Tuesday’s final round at the Brickyard Golf Club are available with Golfstat, a recap to follow at ETSUbucs.com.