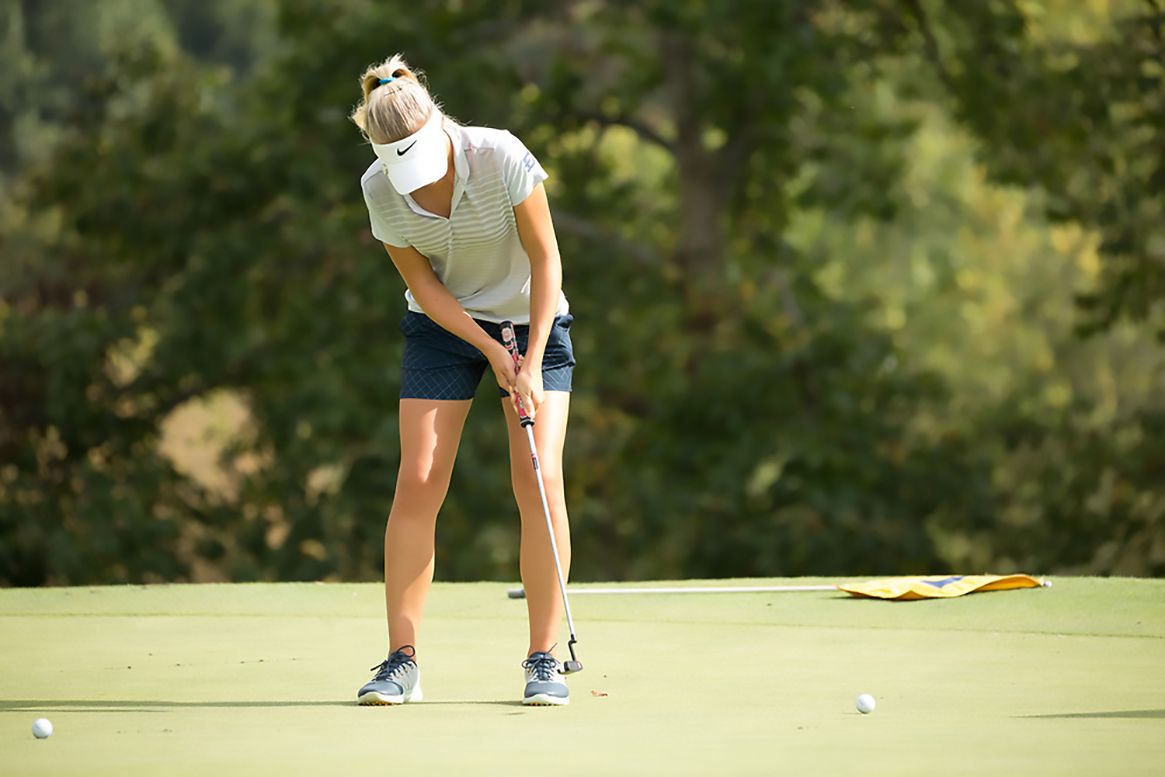 MACON, Ga. (April 9, 2019) – For the second time in the 2018-19 athletic year, weather intervened in sophomore Tereza Melecka’s (Belcovice, Czech Republic) bid to win her second collegiate tournament title, as rain cancelled the final round of The Brickyard Collegiate Tuesday morning.

Mother nature’s interference means tournament results revert to Monday’s two-round scores, leaving Melecka’s 3-under-par good for a fourth-place finish individually, her second top-five of 2018-19, while ETSU’s 6-over-par final score placed them ahead of many top teams in a stacked field.

“Tremendous team performance,” said head coach Stefanie Shelton. “We took advantage of getting to play yesterday and finishing above North Carolina, Kennesaw State and other high-level programs makes us really proud of our play.”

The Bucs third-place finish is their second top-three in the last month, finishing in second-place at the River Landing Classic in early March. Mercer was crowned team champion at their home tournament by the slimmest of margins, a one stroke victory, while the Bears’ Carol Pyon also claimed the individual win by one stroke over Charlotte’s Sierra Stout.

For Melecka, Tuesday’s news is rather familiar to what she experienced earlier this athletic season. At October’s Magnolia Invitational, Melecka fired a second-round 68 to move up the leaderboard into second-place going into the final day of the tournament. With Melecka breathing down the neck of Auburn’s Anika Bolcikova for the individual lead, weather moved in to cancel the last round of play, taking the final result out of Melecka’s hands.

Meeting the same fate at Brickyard Golf Club early this week, Melecka was understandably conflicted as the Bucs returned to Johnson City.

“I felt really good yesterday,” said Melecka. “I was confident and patient with the golf course. But it was also disappointing to not play today because I was ready to fight for the win. Still, I’m happy to have finished in the top-five, it gives me more confidence for my preparation for conference.”

Melecka’s third career top-five outcome was flanked by senior Hee Ying Loy (Johor, Malaysia) finishing in a tie for seventh-place, the 23rd top-10 of her incredible career, Kornbongkoat Sararat (Nongkhai, Thailand) logging the best finish of her sophomore season, a tie for 23rd, and Warda Amira Rawof (Kuala Lampur, Malaysia) finishing in the same position as Sararat, her third straight top-25 of spring.

The well-rounded results send ETSU to their biggest tournament of the season in prime form.

“We leave for conference this weekend and it’s a strong field,” Shelton stated. “Furman is a top-25 team and Mercer may have put themselves into position for a regional bid with the win this weekend. We look forward to it.”

The first round of the Southern Conference Championships from Hilton Head, S.C. begins Sunday, the three-round tournament concluding Tuesday with the winner claiming an automatic bid to the 72-team NCAA tournament.