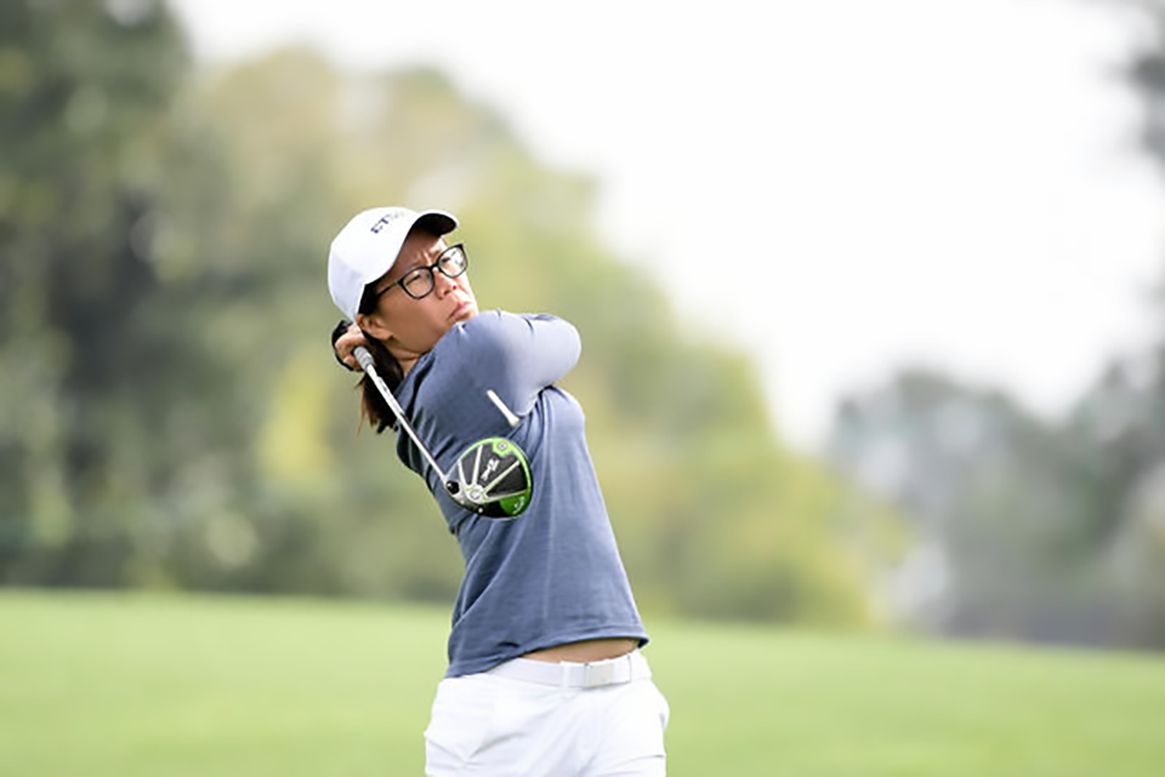 “The team looks good,” head coach Stefanie Shelton said. “Loy played a steady, solid round, and when conditions got a little tough it was good to see the team step up and finish strong.”

On a day in which scoring was difficult for all involved, Loy left the first day of play in a three-way tie for the top spot on the individual leaderboard, shooting a 1-under-par 71 that opened with 10 straight pars. Along with Haylee Harford of Furman and Monica San Juan of Chattanooga, Loy moves to Monday as one of just three in red numbers, Mary Janiga of Mercer one stroke back as the only other in the 45-golfer field not to shoot over-par on the league championship’s opening day.

“I learned my lessons from last year,” Loy said, referring to her 16th-place finish at this same tournament in 2018. “I was very patient today and pars are good on this course, especially when the winds pick up. I think I understand that more after last year.”

ETSU’s tremendous team performance would not have been possible, though, without more members of the Blue and Gold making solid shots throughout the day. At the front of the group that flanked Loy were sophomores Tereza Melecka (Belcovice, Czech Republic) and Kornbongkoat Sararat (Nongkhai, Thailand), who shot matching 77s to tie for 15th-place Sunday, while sophomore Warda Amira Rawof (Kuala Lampur, Malaysia) and junior Ankita Kedlaya (Bangalore, India) also claim top-25 spots going to day two of play at Moss Creek Golf Club, with Kedlaya tied for 20th and Rawof just two strokes back of Melecka and Sararat in a tie for 24th.

With all five Bucs inside the top-25 and the top four scores factored into ETSU’s team score of 15-over-par, the Bucs have set themselves up nicely to close the small gap on No. 26 Furman, who shot 8-over-par Sunday, No. 65 Mercer, who are two strokes off the lead, and Chattanooga, who are five strokes behind the Paladins mark.

Indeed, with the form Shelton’s squad has shown over the last six weeks, the theme seems to be ‘the more golf, the better’. Since the calendar turned to March, ETSU has claimed two top-three team finishes in the three tournaments in which they’ve participated, an individual championship for Loy at the River Landing Classic, and three top-10 individual finishes.

The Bucs will have the chance to move ever closer to adding more accolades to their already loaded resume Monday, teeing off from hole one at 8:50 a.m. ET with playing partners UNCG and Samford, all of whom are within 12 strokes of moving into the top three on the team leaderboard.