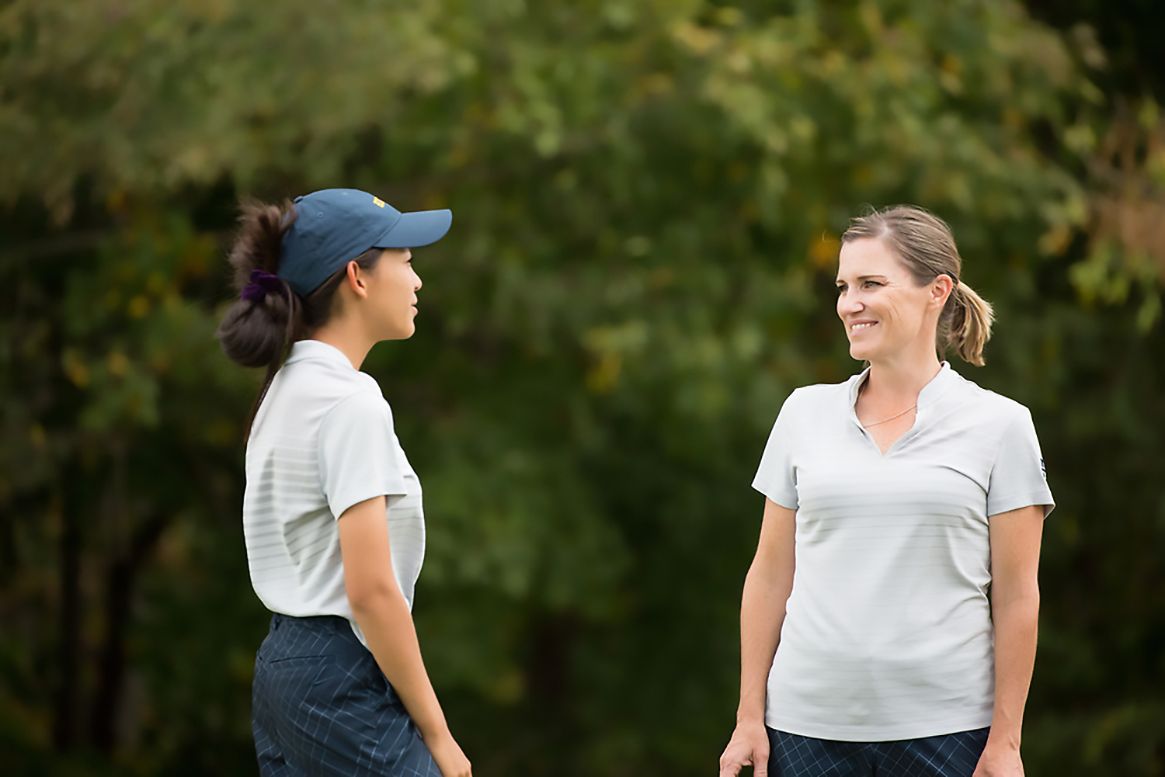 “This spring the girls have been playing their best golf,” head coach Stefanie Shelton said. “We’ve been believing in each other and the girls were really executing well today.”

Leading the Blue and Gold’s two-spot move up the team leaderboard was senior Hee Ying Loy (Johor, Malaysia), who unleashed a firestorm of birdies on the back-nine Tuesday. Loy, who had a difficult open to the day in which she bogeyed three holes in a four-pin stretch on the front-nine, closed the day with a 31 on the final nine holes at Moss Creek Golf Club, dominating a course notorious for its reputation of punishing those seeking low numbers.

“I made a couple of mistakes on the front,” Loy said. “But Coach (Shelton) and I just got things going on the back and I was more aggressive. I’m glad my final conference tournament ended on a good note.”

Loy’s exceptional back-nine vaulted her into a tie for second place, surpassing her previous top finish at the Southern Conference Championship in 2017 when she finished fourth. Loy has finished in the top-20 at the league tournament all four of her seasons with ETSU, top-10 in three of the four. The result strengthens her argument to be selected for her third consecutive NCAA regional, which would be an ETSU record.

Sophomore Tereza Melecka (Belcovice, Czech Republic) battled to her low round of the three-day tournament, shooting a 75 to finish tied for 12th-place, seven spots ahead of her freshman finish at the SoCon Championship. Also attaining a personal event-best was junior Ankita Kedlaya (Bangalore, India), whose 20th-place tie stands as her best finish in tournament-play since the 2017 River Landing Classic and surpasses her best placing of 2018-19 by 33 spots. Sophomore Warda Amira Rawof (Kuala Lampur, Malaysia), the golfer to tie the aforementioned Melecka for 12th-place, did Melecka, Loy and Kedlaya one better in career achievements, setting her mark for best finish not only at the league championship, but in her collegiate career. Sophomore Kornbongkoat Sararat (Nongkhai, Thailand) joins Rawof with that distinction, bettering her previous top finish of 23rd at last week’s Brickyard Collegiate by tying Kedlaya for 20th. Sararat has now claimed four straight top-40 results, while Rawof has logged four consecutive top-25s. 2019 marks the first conference championship in which ETSU has had all five of their golfers finish in the top-20 since the Bucs won the Atlantic Sun Championship in 2014.

“It was really great team golf,” Shelton said. “A lot of times when you make a mistake that leads to a bogey or double bogey you feel the weight of the world on your shoulders, but when you know your teammates are out there making birdies to help you it allows you to play with a lot more confidence.”

The only team to best ETSU was Furman, Golfweek’s No. 26 team showing a calm, collected presence to lock in their fifth straight Southern Conference postseason title. The Bucs and Chattanooga finished at 41-over-par for the tournament, with ETSU claiming second by virtue of shooting the lower round Tuesday, while Mercer saw the pressure of final round play knock them down to fourth-place after a 20-over-par day.

Individually, while Loy’s 70 was the day’s best score, the six-stroke lead of Chattanooga’s Monica San Juan was too much to overcome, the Mocs’ senior clearing Loy and Furman’s Haylee Harford by four strokes to clinch the individual league title despite shooting a final round 74. The win is the first of San Juan’s career as her 1-under-par cumulative score left her as the only golfer not to shoot 3-over-par or higher in the tournament.

Tuesday’s final round marked the end of promised golf for ETSU in the 2018-19 athletic and academic year. The NCAA Selection Show takes place Wednesday, April 24 at 5:30 p.m. ET on the Golf Channel.