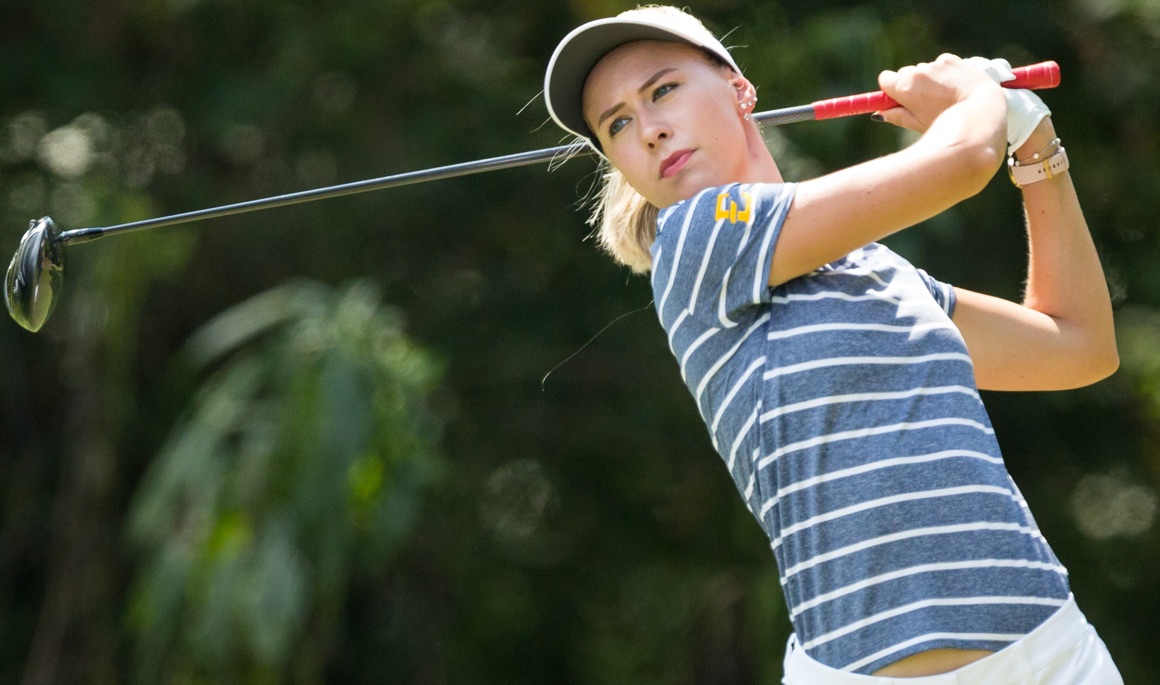 KNOXVILLE, Tenn. (Sept. 16, 2019) -- ETSU junior Tereza Melecka (Belcovice, Czech Repbulic) sits in a three-way tie for fourth-place after finishing day one of the Mercedes-Benz Intercollegiate at 3-under-par 139 on Monday from the Cherokee Country Club in Knoxville.

Melecka, who is searching for her second collegiate win, fired a 3-under 68 in round one, while wrapping up the day with an even-par 71. The all-Southern Conference standout totaled 22 pars and nine birdies over the first 36 holes, including stringing together three straight birdies over her first four holes to start the tournament. Melecka then added a birdie on the par-4, No. 1 and again on the par-4, No.  9 en route to posting her third-lowest collegiate round with the 68. From there, the Buccaneer junior overcame some adversity in round two as she was sitting two-over through her first seven holes, but Melecka was able to get back to even-par with a birdie on the par-5, 515-yard No. 5 and on the par-4, 349-yard No. 7, which kept her in the pack of the leaders.

Melecka enters Tuesday’s final round three shots off the lead as Kent State’s Pimnipa Panthong is atop the leaderboard at 6-under-par 136, and teammate Karoline Stormo is one shot back at 5-under-par 137. Ana Gonzalez, of UTSA, is in third-place at 4-under-par 138.

“Tereza is determined to win every tournament she plays in,” said head coach Stefanie Shelton. “It’s fun to watch her compete and she’s looking forward to a strong finish tomorrow.”

The Bucs, who are playing short-handed, carded a two-round score of 609 and are in 14th-place. ETSU was forced to play with only four golfers after senior Ankita Kelaya (Bangalore, India) had to withdraw following opening round play.

Warda Amira Rawof (Kuala Lampur, Malaysia) and freshman Rimsha Ijaz (Lahore, Pakistan) were both able to move up the leaderboard following respectable second round performances. Rawof registered a 4-over 75 to move nine spots up the leaderboard into a tie for 64th and Ijaz – playing in her first collegiate tournament – ended the day with a 3-over 74 and is tied for 71st.

Tuesday’s final round gets underway at 9 a.m., with live scoring being provided by Golfstat.com.

Twitter updates will be provided by following @ETSUWomensGolf and recaps will be posted on ETSUBucs.com following the round.