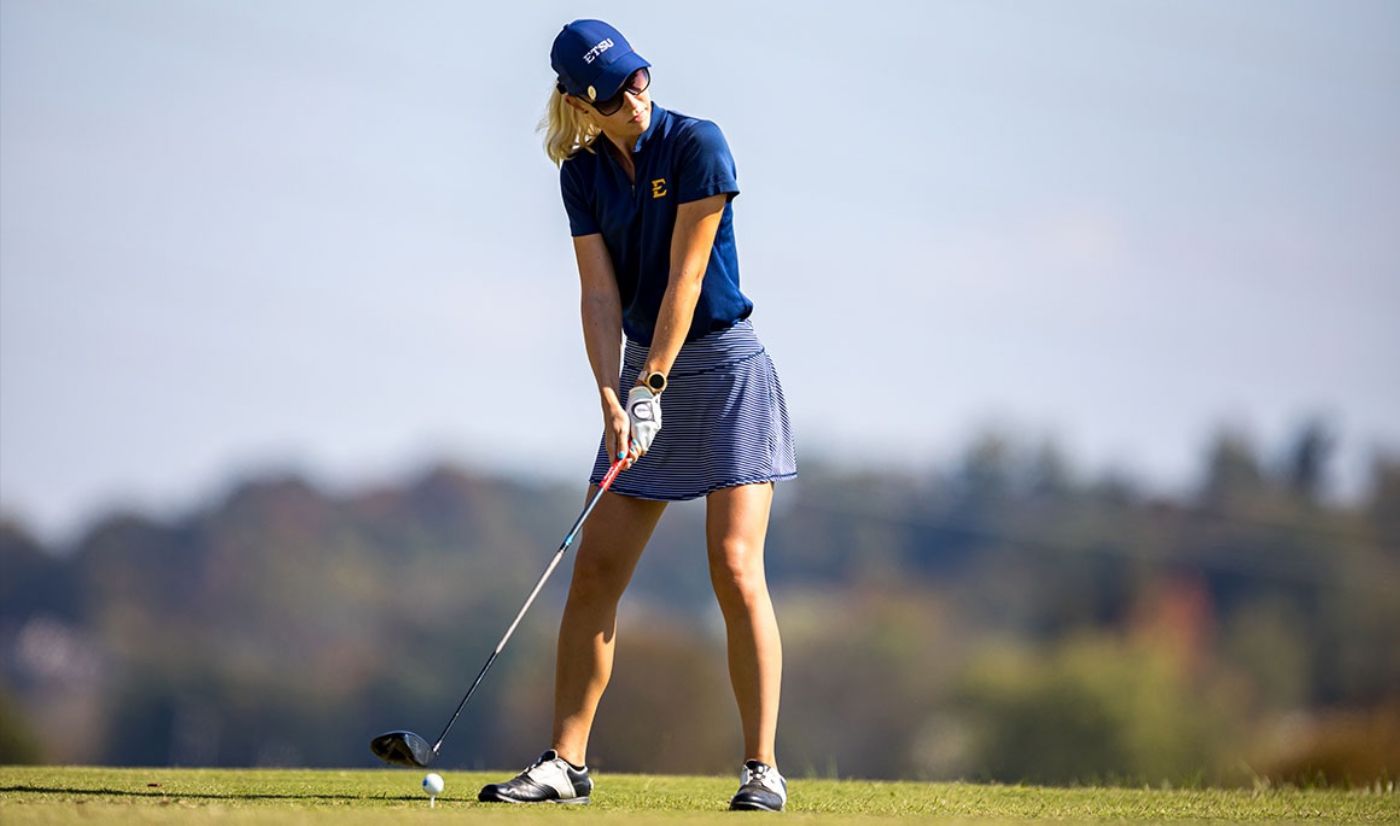 Melecka sits atop leaderboard; ETSU has five in top-10

SPARTANBURG, S.C. (Oct. 26, 2020) – Highlighted by five Buccaneers in the top-10, the ETSU women’s golf team holds the lead following Monday’s opening two rounds of the Terrier Intercollegiate from the Country Club of Spartanburg.

The Bucs, who are making their season debut, fired scores of 292 (+4) and 290 (+2) in the first two rounds en route to grabbing a 17-shot lead over their nearest competitor in conference rival Chattanooga. ETSU is 6-over-par 582, while the Mocs are 23-over 599 and host Wofford sits in third-place at 34-over-par 610. ETSU leads the field with 23 birdies and 122 pars, while Chattanooga recorded 21 birdies and 111 pars on day one.

“It rained in Sunday’s practice round, so the course played tough today,” said head coach Stefanie Shelton. “The ladies really played some great golf out there today. It was a great first two rounds for everyone and we look forward to getting back out there tomorrow.”

The Blue and Gold were led by senior leader Tereza Melecka (Belcovice, Czech Republic) as she fired consecutive rounds of 72 to hold the outright at even-par 144 in the 33-player field. In round one, Melecka collected three birdies – including back-to-back on No. 14 and  No. 15 – while then totaling two birdies, 14 pars and two bogeys in the second round.

Melecka has a lot of familiar faces near the top of the leaderboard as senior Warda Amira Rawof (Kuala Lumpur, Malaysia) and graduate transfers Blanca Porta and Julia Goodson (Hudson, Ohio)are all in the top-five. Rawof sits in a tie for second-place at 1-over-par 145 (72-73), Porta is in fourth at 2-over-par 146 (72-74) and Goodson is tied for fifth at 4-over-par 148 (76-72).

Grace Chin, who is playing in her first collegiate tournament, is tied for ninth at 7-over-par 151 (78-73), while senior Kornbongkoat Sararat (Nongkhai, Thailand) – playing as an individual – is also tied for ninth. Chin and Sararat had identical scores of 78 and 73 in both rounds on Monday. Freshman Elle Willis – also playing as individual – is tied for 12th at 8-over-par 152 (79-73).

Porta tied for the lead in par-5 scoring (4.75) while Melecka and Chin had the lowest scoring total on the par-3s (2.88). Melecka and Porta both registered 26 pars – the second-most in the field – while Rawof’s six birdies were tied for the most through 36 holes of competition.

Tuesday’s final round gets underway at 9 a.m. with the Bucs teeing off from No. 1 starting at 9:30 a.m. Live scoring is featured on BirdieFire.com. Updates will also be posted on Twitter at @ETSUWomensGolf, while recaps will be posted on  ETSUBucs.com at the conclusion of each day.