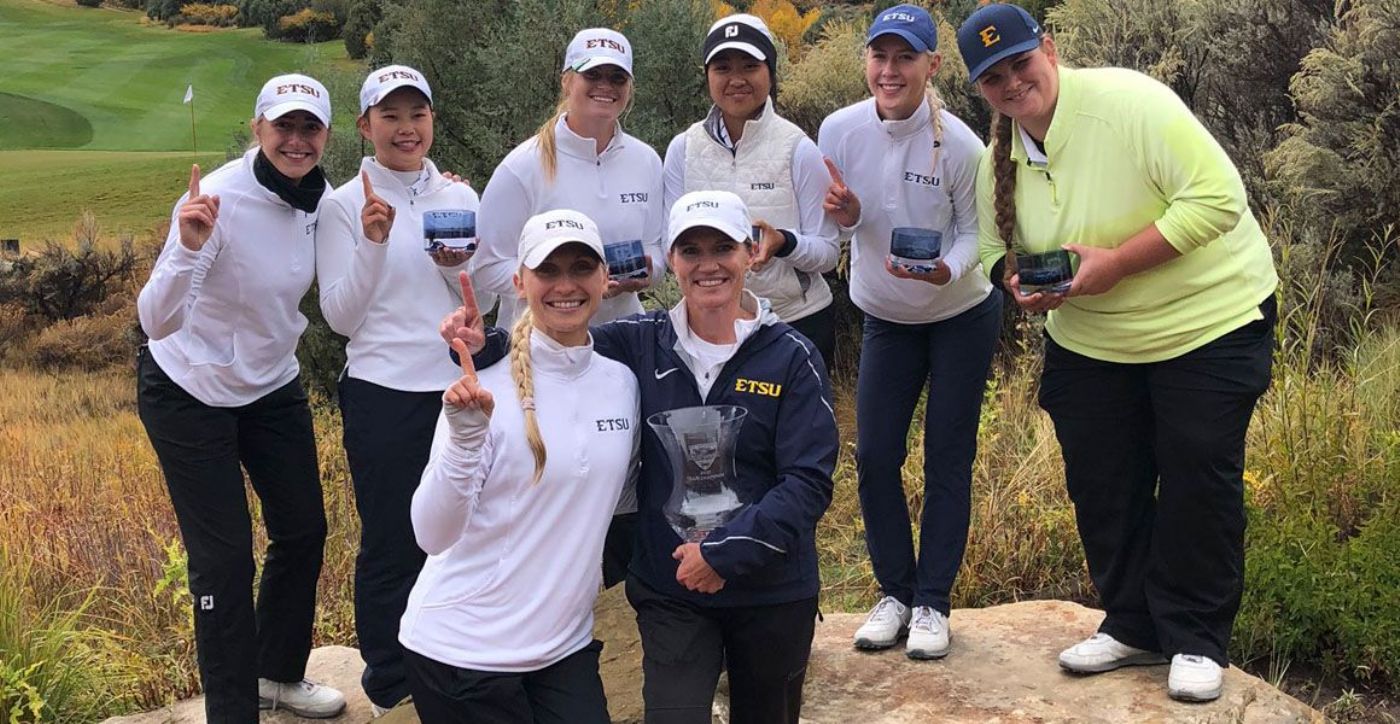 WOLCOTT, Colo. (Sept. 29, 2021) – The ETSU women’s golf team began the day with a one shot  lead and ended it in the same spot, as the Buccaneers held on to capture the win Wednesday afternoon at the Golfweek Red Sky Classic from the Red Sky Golf Club in Wolcott, Colo.

Battling cold, windy and rainy conditions, the ETSU women’s golf team resumed second-round play at 7-under-par, leading Denver by one stroke. Having already played thru 11 holes on Tuesday, the Bucs eventually built a three-shot lead down the stretch and posted the win with a team score of 6-under-par 570 (279-291). The tournament was shortened to 36 holes after Tuesday’s round was suspended due to darkness following a weather delay mid-round.

Playing in its second tournament of the fall season, ETSU has now recorded wins in four of its last 10 outings, dating back to last season. Overall, the Blue and Gold registered their 19th tournament win in the Stefanie Shelton era, while ETSU is the eighth different team in the 12-year event to hoist the team trophy. The Bucs join Ole Miss, UCLA, Oklahoma, Virginia, San Diego State, Pepperdine and Denver as team winners in the Golfweek Red Sky Classic.

ETSU and Denver were the only two schools in the 20-team field to finish the tournament below par as No. 24 BYU placed third at 1-over-par 577. The Cougars – who won their first two tournaments this season, including last week’s Mercedes-Benz Collegiate where ETSU was also in the field – got to 5-under late in the final round, but finished at 8-over on the day, dropping them out of contention.

ETSU had three golfers finish in the top six with senior Tereza Melecka (Belcovice, Czech Republic) finishing runner-up at 5-under-par 139 (67-72). Melecka held a one-shot lead heading to the final hole – the par-5, 513-yard No. 18 – but carded a double-bogey, moving her to even-par for round. Melecka recorded 22 pars and 10 birdies for the tournament en route to posting her ninth top-5 collegiate finish.

Playing in just her second collegiate tournament, freshman Sera Hasegawa (Gifu, Japan) finished tied for third at 3-under-par 141 (70-71). Hasegawa strung together consecutive rounds below par, including a 1-under 71 in round two. The Buccaneer rookie played the final 13 holes at 2-under, while leading ETSU with 24 pars over the 36-hole tournament.

Senior Hollie Muse (Liverpool, England), a transfer from Arizona, finished in a four-way tie for sixth at 2-under-par 142. This marked Muse’s second top-10 placing at the Division I level as she finished fifth at the Arizona Wildcat Invitational in 2019-20.

The Bucs will eye their second straight win in The Centennial State as ETSU heads back to Colorado for the Ron Moore Intercollegiate, starting Friday, Oct. 8.