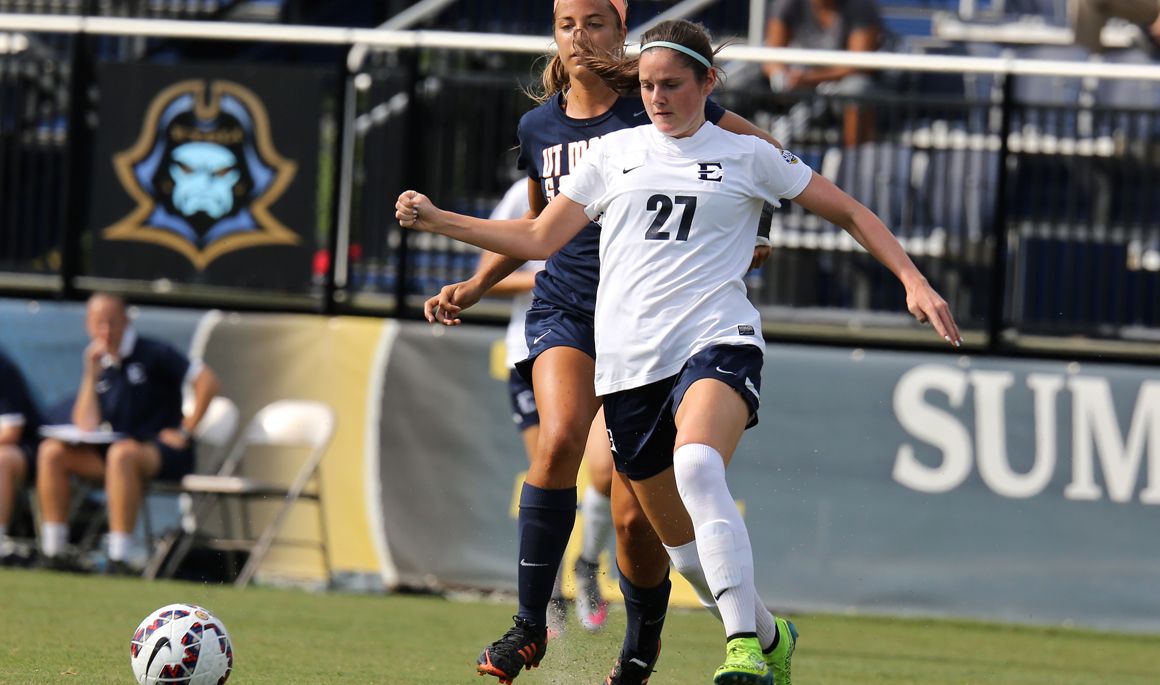 JOHNSON CITY, Tenn. (August 17, 2015) – The ETSU women’s soccer team overcame an early deficit by scoring three goals in the second half to complete a comeback victory over UT-Martin, 3-2 Monday morning.

The Skyhawks broke the tie early in the first half off a corner kick from freshman Maggie Burkett that was headed in by junior Saphyra Coombs-James to give UT-Marin the early 1-0 lead. ETSU had their chances in the first half outshooting UTM 8-4 with freshman Delaney Griffin and senior Sarah Zadrazil compiling two shots on goal.

UT-Martin responded with another goal from Coombs-James off a rebound to help the Skyhawks regain the lead.

Five minutes later, ETSU was back on the attack as Zadrazil weaved through the UTM defense up the field and dished it off to Brutsch on the left side, who rocketed it past the goalkeeper tying the game up at 2-2. Freshman Isabel Hodgson recorded the game winner blasting a shot into the upper right corner of the goal to give ETSU the 3-2 victory.

Junior goalkeeper Jasmine Elliott did the majority of the work in between the pipes registering three saves. Freshman LeaAnn Cutshall relieved Elliott in the 78th minute and made one save. Preseason All-SoCon selection Zadrazil made her presence felt scoring one goal on three shots and dishing out two assists.

It was the final exhibition game for ETSU as they prepare for their first regular season bout on Friday, Aug. 21 at USC Upstate beginning at 7 p.m. That game is followed by another road contest at Radford on Aug. 24. The Bucs home opener is on Aug.28 at 7 p.m. against Tennessee Tech.