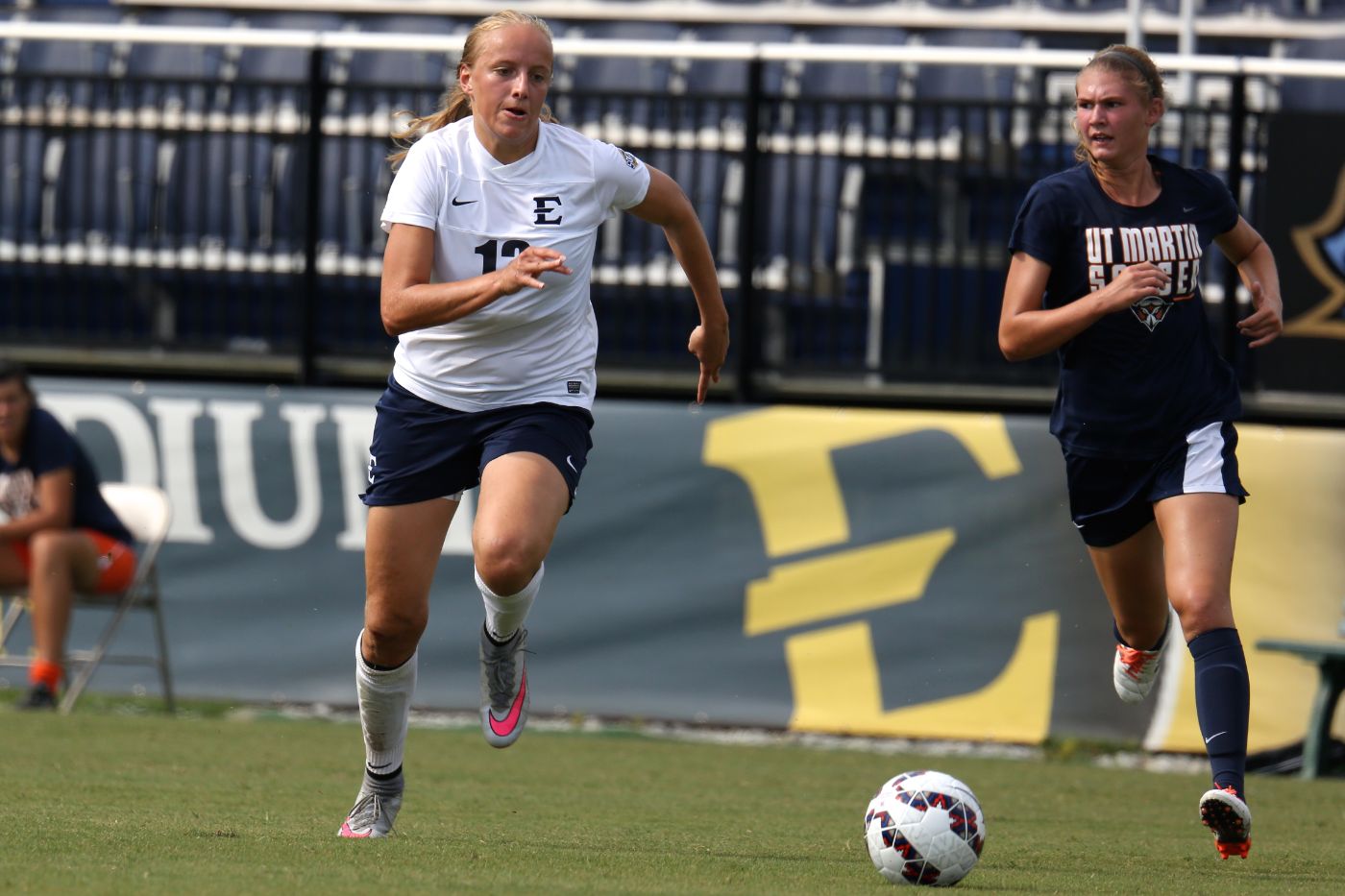 ETSU hosts their home opener on Friday Aug. 28 at 7 p.m. against Tennessee Tech.

RADFORD, Va. (August 24, 2015) – A balanced offensive attack along with stellar goaltending helped the ETSU women's soccer team come away with a 3-1 victory over the Radford Highlanders on Monday night.

ETSU provided the first goal of the game in the 21st minute as freshman Irina Brutsch (Zurich, Switzerland) scored her first collegiate goal. Brutsch was able to muscle her way in front of a couple Radford defenders and quickly strike the ball to the right of the goalkeeper to give the Bucs a 1-0 lead. Junior Molly Collison (Cramlington, England) who had a goal in the 2-0 victory over USC Upstate dished the assist.

The Blue & Gold took a 2-0 lead into halftime thanks to senior Sarah Zadrazil (St. Gilgen, Austria) netting her second goal of the season. After an assist by sophomore Paola Roversi (Rieti, Italy), Zadrazil rocketed a shot off the goalkeepers hands that bounced straight into the goal.

"Very proud of the whole team today. Everyone contributed. Everyone who played, and those that didn't. Radford is a very good team and difficult to play against, " said head coach Adam Sayers. "Jazz Elliott was excellent in goal, as were the back four. Cecilia Re and Paola Roversi shined in a very congested midfield area as they play so well together. The goals by Irina Brutsch, Sarah Zadrazil and Thomai Vardali were all very well taken."

It was yet again a first half dominated by the Bucs, outshooting Radford 10-4, including 3-1 shots on goal. In two games this season ETSU has outscored their opponents in the first half, 4-0.

Radford was on the attack in the second half and that sustained attack was capped by senior Asyia Mitchell putting the Highlanders on the board to cut the ETSU lead to 2-1. It was the first goal given up by ETSU this season. The Buccaneers made sure that there wasn't going to be a comeback on this night as junior Thomai Vardali (Koufalia, Greece) iced the game with her first goal of the season and gave ETSU the 3-1 victory.

"Radford came back on us in the second half but we defended the counter attack very well, particularly Isabel Hodgson recovering from wide areas to ideal defensive positions," said Sayers. "Our response to conceding a late goal was excellent, we didn't panic and had to battle to earn the result. The spirit in the group is very strong at the moment and we will have to maintain that moving forward."

It's been a good start to the 2015 campaign for the Buccaneers showing off a balanced attack scoring five goals while allowing just one goal and racing off to a 2-0 start.  Zadrazil has provided an offensive spark recording five points with two goals and one assist in two games.

ETSU begins a five game home stand on Friday Aug. 28 when they take on the Golden Eagles of Tennessee Tech inside Summers-Taylor Stadium. Match is set for 7 p.m. The Bucs square off with Atlantic Coast Conferece (ACC) power NC State on Sunday, Aug. 30 at 1 p.m.