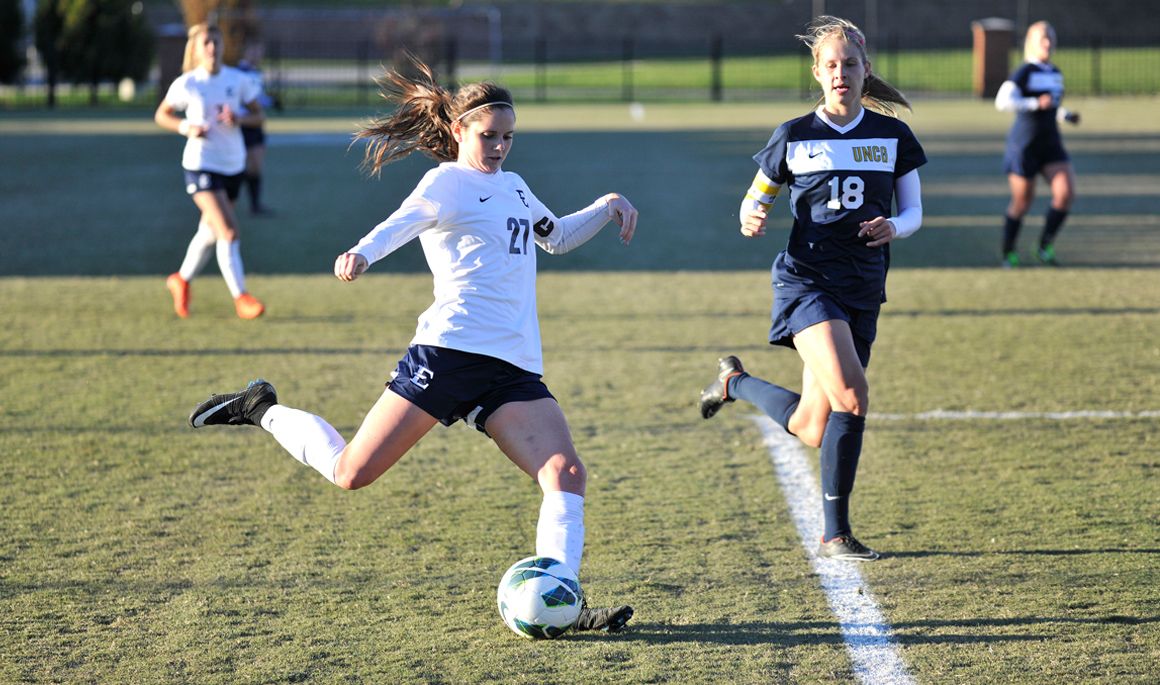 In their first two games the Bucs have outscored their opponents 5-1, including 4-0 in the first half.

Scouting the Bucs
ETSU returns home after being on the road for the first two games of the 2015 campaign where they defeated USC Upstate, 2-0 and Radford, 3-1. Senior Sarah Zadrazil (St. Giigen, Austria) has led the Bucs offense so far, collecting two goals and one assist.

Home Sweet Home
This weekend marks the first of five straight home games for the Buccaneers. ETSU will take on Eastern Kentucky on Wednesday Sept.2 at 7 p.m. before taking on Navy (Sept.6) and Marshall (Sept. 11). It will be the first time in program history that ETSU has faced the Midshipmen and Thundering Herd.

Home is where the wins are
Since it’s opening in 2008; Summers-Taylor Stadium has been one of the toughest places to win for opposing teams with ETSU compiling a 41-17-3 record. The Bucs have won at least five games at home each of the last five seasons. Under head coach Adam Sayers, ETSU has an overall home record of 28-8-2.

Elliot on top of the record books
After a 3-1 victory of Radford on Monday night, junior goalkeeper Jasmine Elliott (Preston, England) became ETSU’s all-time career wins leader, notching her 16th victory. The win pushed Elliott passed Megan Masch who has held the record since 2010. Elliott is 2-0 this season with one shutout and has a goal against average of 0.50, ranking her second in the Southern Conference.

Freshman Movement
Nine of the 13 freshman on the 2015 squad made their collegiate debuts through the first two games. Freshman Irina Brutsch (Zurich, Switzerland) made the most of her collegiate debut compiling her first goal of the season at Radford on Aug. 24.

Scouting the Golden Eagles
The Tennessee Tech Golden Eagles have a record of 0-2 with losses coming against Little Rock, 2-1 on Friday and a double overtime loss to Middle Tennessee State, 1-0 on Sunday. The Golden Eagles average six shots per game and have a GAA of 1.39. In between the pipes for TTU is freshman Kari Naerdemann who ranks second in the Ohio Valley Conference in save percentage (.857) and saves (18).

Last time vs. Tennessee Tech
In 2014, four different ETSU players found the back of the net as ETSU cruised past TTU, 5-1. Simona Koren scored two goals on the night as the Bucs outshot the Golden Eagles 20-9. Three of the five goals for the Blue & Gold came in the second half.

Scouting the Wolfpack
The NC State Wolfpack travel to Johnson City with an overall record of 0-2 with losses against San Diego and nationally ranked Pepperdine as part of the Torero Classic. NC State hosts their home opener on Thursday Aug. 27 against Elon before taking on the Bucs. Redshirt sophomore Jackie Stengel is having a comeback season after being injured in 2014, leading the Wolfpack with one goal on four shots and two points.

Last time vs. NC State
Despite recording 12 shots and five shots on goal, ETSU suffered a 3-0 defeat at NC State back in 2013. The Bucs surrendered two first half goals that put the game out of reach as ETSU was outshot 13-12 including 7-5 in shots on goal.