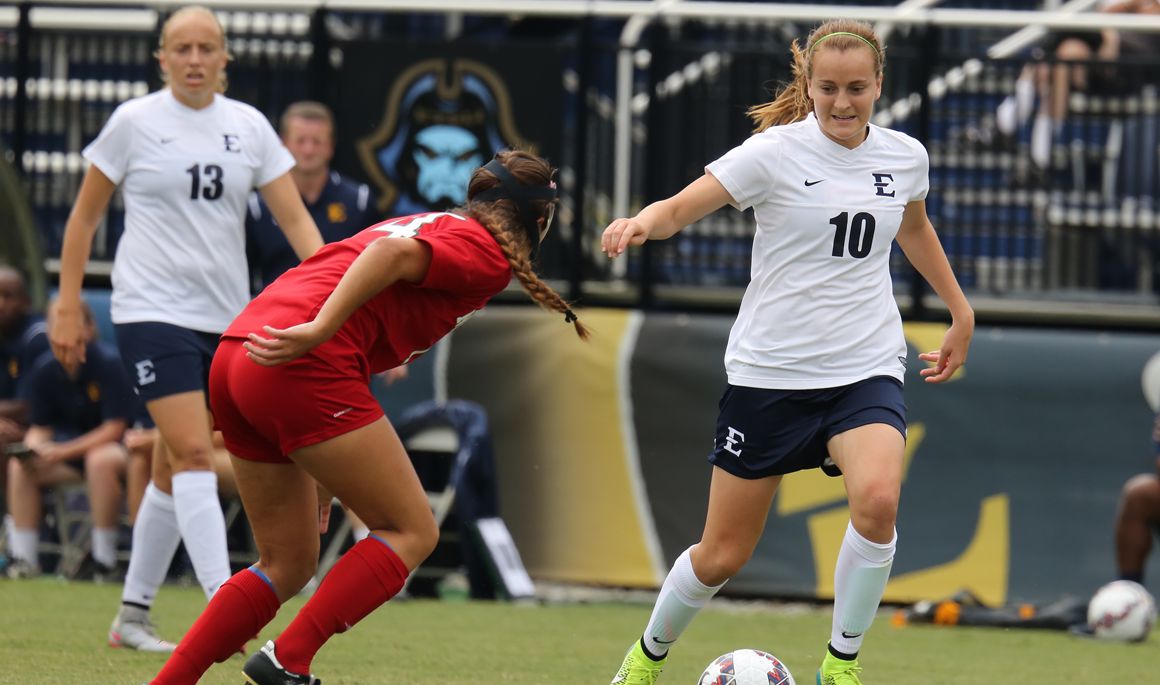 ETSU continues homestand with a duo of firsts.
Related Links

It’s the first time in program history the Bucs take on both Eastern Kentucky and Navy.

JOHNSON CITY, Tenn. (September 1, 2015) – ETSU women’s soccer continues its five game homestand with a pair of games beginning on Wednesday Sept. 2 against Eastern Kentucky at 6 p.m. That game is followed by Sunday’s 1 p.m. match-up against Navy.

Scouting the Bucs
The start of ETSU’s five game homestand kicked off with a home opening win over Tennessee Tech, 1-0 on Friday night. It was followed by a tough 2-0 defeat at the hands of Atlantic Coast Conference (ACC) power NC State on Sunday. The Bucs have an overall record of 3-1-0 with two shutouts against Tennessee Tech and USC Upstate.

Home is where the wins are
Since it’s opening in 2008; Summers-Taylor Stadium has been one of the toughest places to win for opposing teams with ETSU compiling a 42-18-3 record. The Bucs have won at least five games at home each of the last five seasons. Under head coach Adam Sayers, ETSU has an overall home record of 29-9-2.

Ranking well in the SoCon
ETSU ranks second in shots (63) in the SoCon narrowly behind VMI who leads the conference with 66. The Bucs are second with a 0.75 goals against average. Junior Molly Collinson (Cramlington, England) has 13 shots on the season, ranking her second and junior goalkeeper Jasmine Elliot (Preston, England) is tied for the conference lead in shutouts (2).

Bucs against the Ohio Valley Conference
During the 2015 campaign the Bucs are 1-0 against the OVC with the lone win coming against Tennessee Tech. ETSU faced another OVC opponent during exhibition play, earning a 3-2 victory over UT-Martin. Overall, the Blue & Gold are 16-17-4 against OVC opponents.

Bring on the Patriot League
Sunday’s contest against the Navy Midshipmen will be the first time that ETSU has faced a team from the Patriot League. The Patriot League has saw eight different opponents participate in the NCAA tournament with Colgate in 2004 and Boston in 2013 recording first round victories.

Shots, Shots, Shots
Through the first four games this season ETSU has nearly doubled their opponents in shots, outshooting the opposition, 63-35. The Bucs have been dominant in the first half where they have outshot their opponent, 37-13.

First Time for Everything
The next three opponents for ETSU (Eastern Kentucky, Navy, Marshall) will mark the first time in which the Bucs have faced each opponent.

Scouting the EKU Colonels
The Eastern Kentucky Colonels come into Wednesday’s contest with an overall record of 0-4 and are coming off two home losses against Cleveland State and UNCG. Senior goalkeeper Samm Melton has been busy in the first four games of the season, recording 23 saves ranking her 26th in the NCAA.  Melton made a career-high 10 saves at UNC Asheville.

Scouting the Navy Midshipmen
The Midshipmen are 2-2 on the season and have posted impressive wins over UMBC and on the road at Big Ten conference member Maryland. The Midshipmen will have another tough task ahead as they take on the Tennessee Volunteers on Thursday before heading to Johnson City. Navy seems to play a rough style of soccer totaling four yellow cards, ranking them 19th in the NCAA.