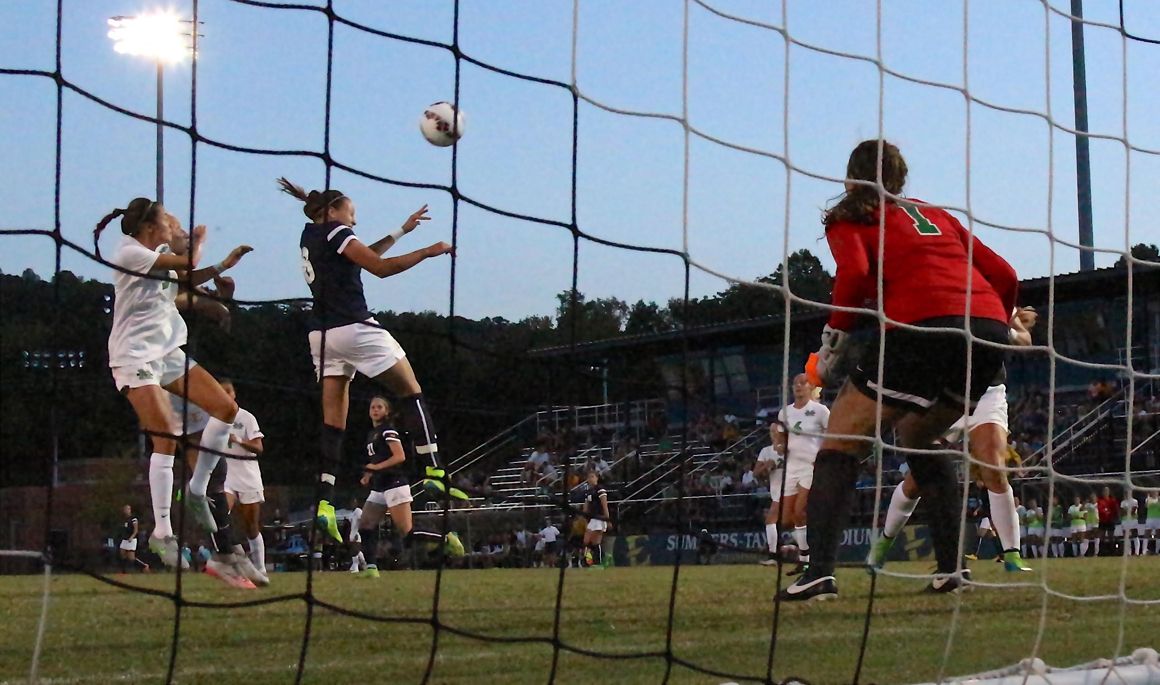 Koren scored the lone goal for the Bucs in the first half.
Bucs edged by Marshall, 2-1
Marshall at ETSU | September 11, 2015
Related Links

Bucs compiled a 2-3 record during their five game homestand.

JOHNSON CITY, Tenn. (Sept. 11, 2015) – On Friday night the ETSU women’s soccer team played the final game of their mid-season five game homestand and was defeated by Marshall, 2-1 at Summers-Taylor Stadium.

In a tightly contested first half ETSU broke through in the 42nd minute when junior Simona Koren (Graz, Austria) headed in her first goal of the season with the assist from fellow junior Molly Collinson (Cramlington, England). Collinson executed a cross that went to the right corner of the net where Koren out jumped two Marshall defenders to give ETSU a 1-0 lead at halftime.

Despite having the lead Marshall outshot the Bucs 11-7 and had the advantage in shots on goal as well, 4-2. Odds are in the Blue & Gold's favor when leading at halftime as they are 2-0 when doing so this season.

The lead didn’t last long as Marshall scored one minute into the second half off a corner kick. Senior defender Jenna Dubs earned the assist rocketing a corner kick into the middle of the box where sophomore Katie Suchodolski put the ball in the back of the net, tying the game up.

Marshall took the lead halfway through the second half when Kelly Culicerto took a shot from the top of the box that sailed past the ETSU defense giving the Thundering Herd the 2-1 lead. Freshman forward Ashley Seltzer had the assist.

The goal in the 64th minute ended up being the game-winner as ETSU had its chances but was unable to get the ball in the back of the net. The best chance for the Bucs in the second half came with ten minutes remaining when freshman Emily McKerlie (Dumfries, Scotland) had a free kick right outside the front of the box that nearly went into the back right corner of the net.

It was a second half dominating by the Thundering Herd outshooting the Bucs 10-3 and 21-10 overall. Marshall doubled ETSU in shots on goal grabbing the 8-4 advantage. It’s the first time this season the Bucs have dropped back-to-back games and went 2-3 in the recent five game homestand.

The Blue & Gold will be back in action with the first of four straight road games on Tuesday, Sept. 15 when they travel to Big South conference member Winthrop. Match is set for 7 p.m.