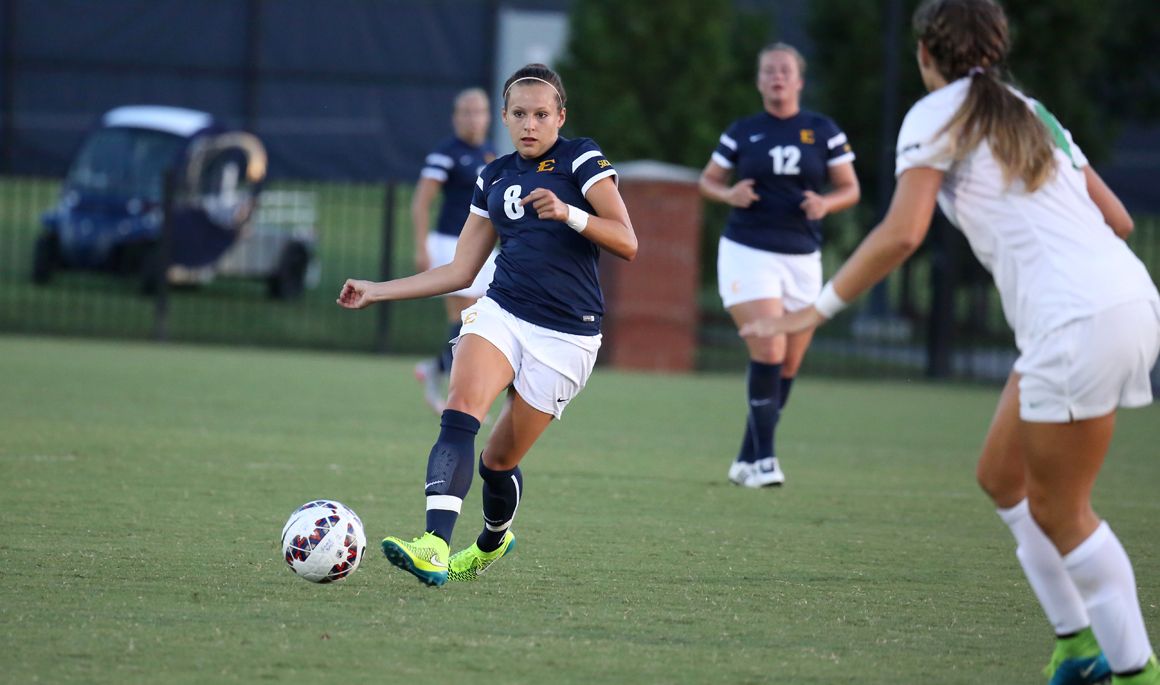 The Bucs compiled 18 shots, the second most this season.

BUIES CREEK, N.C. (Sept. 18, 2015) – In their final non-conference contest of the season, ETSU fell on the road to Campbell, 2-1 on Friday night in Buies Creek, N.C. Junior Simona Koren (Graz, Austria) kept up her stellar play recording a goal in her third straight game.

It was a back and forth first half between the Bucs and the Fighting Camels as each team was unable to sustain pressure and momentum. Campbell was able to break through in the 30th minute when assists from Shannon Wratchford and Kine Thorsvik set up redshirt senior Ashley Clark for her seventh goal of the season, giving Campbell the 1-0 lead into halftime.

ETSU and Campbell were tied in shots with seven apiece but the Fighting Camels had the considerable edge in shots on goal leading 5-1. The Bucs held a 4-1 advantage in corner kicks. Junior goalkeeper Jasmine Elliot (Preston, England) made four saves in the first half giving her 141 on her career, passing Megan Masch for most saves in school history.

The Bucs dodged a bullet 30 seconds into the second half when Campbell’s Thorsvik took the opening kick and raced down the right side of the field blasting a shot that went off the cross bar before an ETSU player kicked it out of play.

In the second half, junior Molly Collinson (Cramlington, England) had a chance to tie the game in the 51st minute. A chip over the Campbell defense found Collinson one-on-one with the goalkeeper but Collinson wasn’t able to get enough on the shot as the ball went straight into the goalie’s chest.

Campbell responded quickly to the ETSU attack, widening their lead in the 57th minute after forward Shannon Wratchford netted her first goal of the season with the assist from forward Payton Ornsby.

A late rally saw ETSU get on the board with 20 seconds remaining as Koren chipped a ball over the Campbell goalkeeper for her third goal of the season. It is the third straight game Koren has scored a goal. Freshman Delaney Griffin (Franklin, Tenn.) earned the assist. However, there wasn’t enough time for ETSU to put another one in the back of the net as they drop their first road game of the season, 2-1.

Despite the score, the Bucs outshot the Fighting Camels 18-17 with Campbell holding a small margin of 9-8 in shots on goal. Each goalkeeper made seven saves on the nigh and ETSU won the corner kick battle, 6-2. Freshman Irina Brutsch (Zurich, Switzerland) led the team in shots with four and Koren, Collinson and freshman Emily McKerlie (Dumfries, Scotland) each had two on goal.

It will be a week before the Bucs are back in action as they travel to Lexington, Va. for their Southern Conference opener against VMI on Friday, Sept. 25 at 4 p.m. ETSU continues the weekend on the road with UNCG on Sunday, Sept. 27 at 2 p.m.