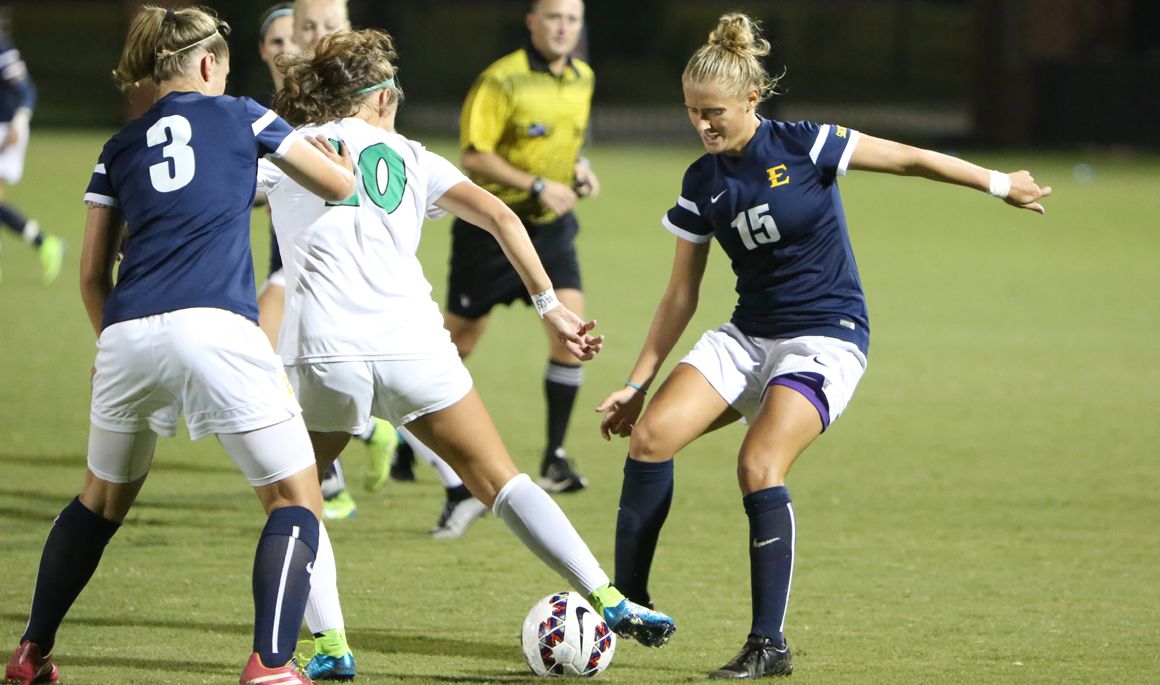 JOHNSON CITY, Tenn. (September 24, 2015) – ETSU Women’s Soccer hits the road for a weekend series against VMI and UNC-Greensboro to open up Southern Conference play. It will be the first time the Bucs have started conference play on the road since 2008.

Scouting the Bucs
The Bucs play the final two games of their mid-season four game road trip, beginning conference play on Friday at VMI followed by at UNC-Greensboro on Sunday. Last Tuesday ETSU traveled to Winthrop were they came away with a dramatic 2-1 victory, scoring the game-winning goal in the 87th minute. On Friday, the Bucs scored late but felt to Big South opponent Campbell, 2-1. With a 5-4-0 overall record, ETSU currently ranks second in the SoCon behind Furman.

All about that Offense
While there were some key departures from last year’s no.1 offense in the NCAA, the Bucs still have a potent offensive attack ranking top five in all offensive categories within the SoCon. ETSU is well ahead in the shots department, leading the conference with 145. ETSU is third in points (43) and ranks fourth in goals (14).

This Girl’s on Fire
Junior forward Simona Koren (Graz, Austria) has been on fire the last three games, scoring a goal in each game. Koren scored her first game-winning goal of the season in a 2-1 victory over Winthrop on Sept. 15. This season she has three goals, one assist and seven points.

Breaking Records with Jasmine Elliott
It’s been a record breaking year for junior goalkeeper Jasmine Elliott (Preston, England) as she is now the career leader at ETSU in program wins (19) and saves (141). Elliott earned her 16th win in a 3-1 victory at Radford back on Aug. 24. She broke the program saves record in a 2-1 defeat at Campbell.

Inside the Numbers
During the 2015 campaign the Bucs are 5-1 when scoring the first goal and have posted a 4-1 record when leading at the half. Since 2011 as part of the A-Sun and SoCon, the Bucs have a 22-12-2 conference record which is fourth best amongst SoCon teams.

50 never looked so good
In his fifth season, head coach Adam Sayers notched the 50th win of his career, defeating Winthrop 2-1 last Tuesday. Sayers has a .607 winning percentage and has led ETSU to three post-season appearances in four years.

Scouting the Keydets
VMI begins conference play with an overall record of 4-5 and is currently on a two-game winning streak, shutting out both Presbyterian and Francis Marion at home. VMI brings in a heavy offensive attack led by senior Sydnie Bligh who has totaled a team high 13 points and five goals. Offensively the Keydets have scored 24 goals this season with 16 coming in one night against Hampton on Aug. 25.

Last Time vs. VMI: Senior Night Propels Bucs
On senior night a season ago, the honored seniors helped lead the Bucs to a commanding 7-0 victory. With the win, ETSU set a new program record for wins in a single season. Five different ETSU players recorded a goal with senior Hannah Short recording a hat trick.

Scouting the Spartans
The Spartans of UNC-Greensboro have an overall record of 2-6-2 and are coming off a 1-1 draw against Appalachian State on Sept. 20. During the 2015 season, the Spartans have had a difficult non-conference schedule playing three nationally ranked teams (no.23 Kentucky, no.10 Virginia Tech, no.2 Florida State).  Senior Chesney White leads UNCG in shots (28) with 12 of those being on goal.

Last Time vs. UNCG: Bucs advance to SoCon Semifinals
In the quarterfinals of the SoCon Tournament the fourth-seeded ETSU scored three second half goals including one in the 91st minute to defeat the Spartans, 3-2. The victory advanced the Bucs to their first SoCon semifinal appearance in program history