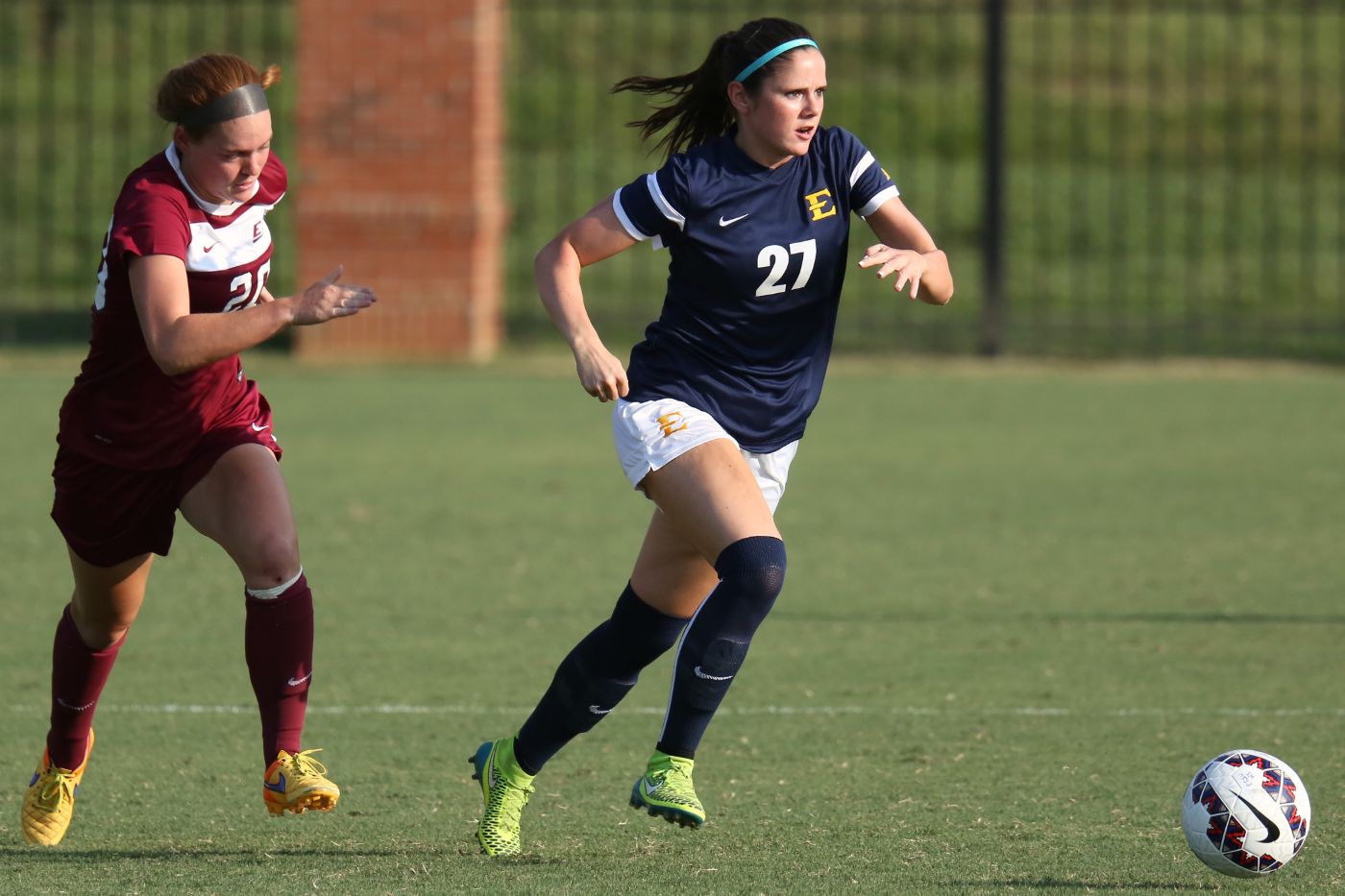 LEXINGTON, Va. (Sept. 25, 2015) – On a rainy Friday afternoon the ETSU women's soccer team earned their first Southern Conference victory of the season defeating VMI, 2-0. The Bucs recorded their third shutout of the season and second straight against the Keydets.

ETSU jumped out to an early 1-0 lead thanks to junior Simona Koren (Graz, Austria) scoring her fourth goal of the season with the assist from freshman Pauline Vienne (Lausanne, Switzlerand). Vienne raced down the left side of the field, crossing the ball to Koren who just got enough on the ball to put it into the back of the net. It's the fourth straight game in which Koren has scored a goal.

Couple minutes later the Bucs had another great chance to get on the board as junior Cecilia Re (Busnago, Italy) was fouled in the box resulting in a penalty kick. Re looked for the bottom left corner of the net but was robbed by VMI goalkeeper Darien Dunham who made the diving save.

It was a dominant first half for ETSU firing off 10 shots, three of which were on goal and had possession of the ball for most of the half. The Blue & Gold defense was strong in the first 45 minutes allowing no shots by VMI.

In the second half it was much of the same story as ETSU controlled the ball throughout the final 45 minutes. The Bucs added to their lead in the 59th minute when junior Molly Collinson (Cramlington, England) netted her team-leading fifth goal of the season giving ETSU a commanding 2-0 lead. Senior Sarah Zadrazil (St. Gilgen, Austria) earned the assist by controlling the ball through the center of the box, making a beatiful pass to the left to Collinson for the goal.

VMI's best chance came in the 66th minute off a corner kick as a well placed ball by forward Blake Cashin found midfielder Kristen Whitehurst who got off a shot that sailed just high.

The Bucs outshot the Keydets 15-8 in the second half and 25-8 overall. The Blue & Gold also held the advantage in shots on goal, 8-1 and corner kicks 8-2. Junior goalkeeper Jasmine Elliott (Preston, England) picked up the 20th victory and eighth shutout of her career. Elliott is now just two shutouts away from becoming ETSU's all-time leader in shutouts, passing Megan Masch.

ETSU earned their third straight win over the Keydets to begin SoCon play 1-0 for the first time since 2013. The Bucs now have an overall record of 6-4 and end the weekend at UNC-Greensboro on Sunday, Sept. 27 at 2 p.m.