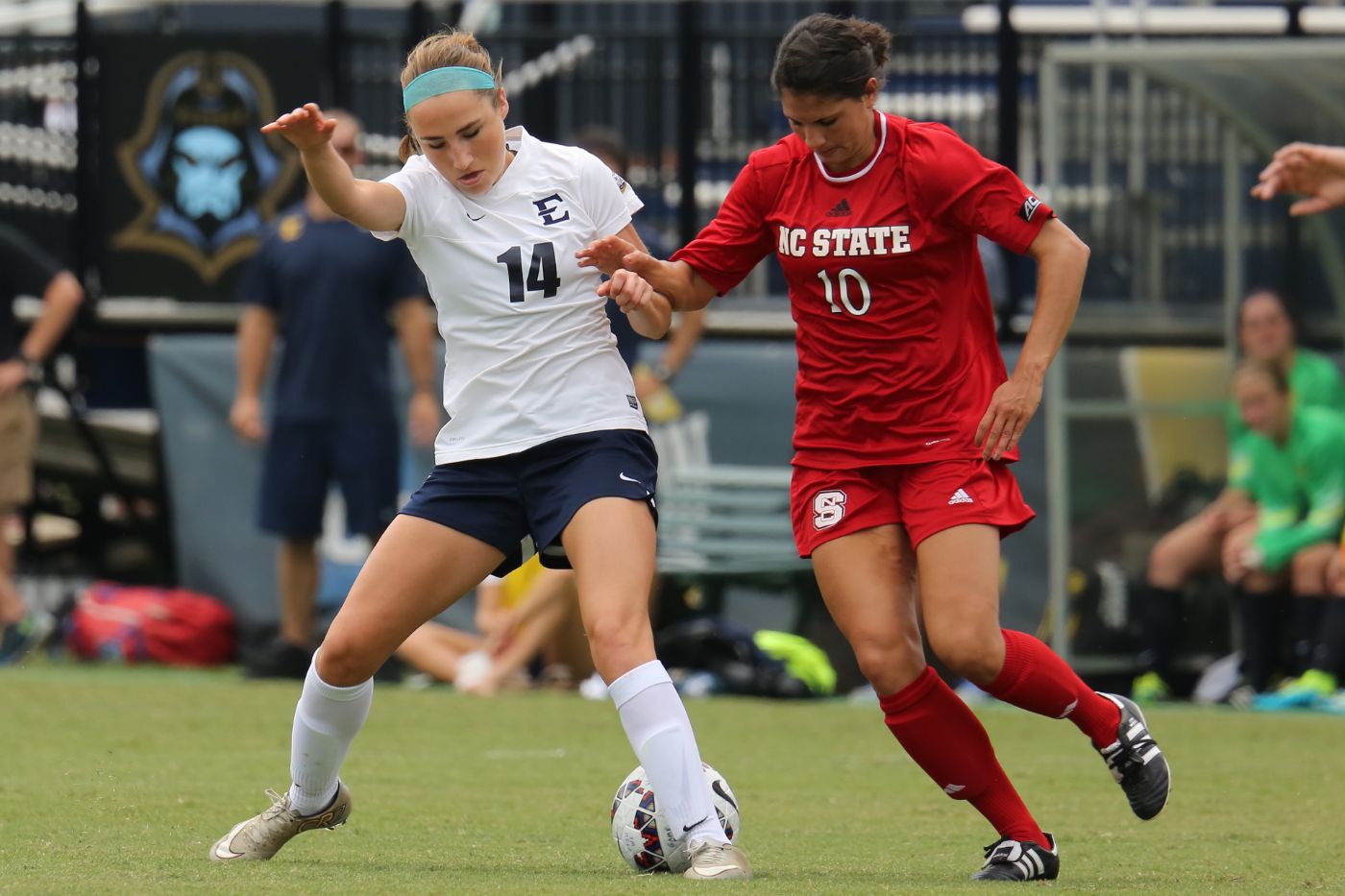 The Bucs hold a three-game win streak over the Spartans

GREENSBORO, N.C. (Sept. 27, 2015) – A multi-goal performance by junior Simona Koren (Graz, Austria) propelled the ETSU women’s soccer team to a 3-1victory over UNC-Greensboro on Sunday afternoon inside UNCG Soccer Stadium. Koren has scored a goal in each of the last five games.

The Bucs move to 7-4 on the season and 2-0 in the SoCon. It’s the first time ETSU has started conference play 2-0 since 2011 when a part of the Atlantic Sun.

"I couldn't be prouder of the girls today. This was our best performance of the season, against a very good UNGC team," said head coach Adam Sayers. "The girls elevated their performance to a new level, which sets the standard for the rest of conference play."

It was no other than Koren who got the Bucs off to a fast start in the 12th minute, scoring her fifth goal of the season with the assist from fellow junior Molly Collinson (Cramlington, England). After a blocked shot, Collinson outraced the UNCG defense along the right side, passing the ball to Koren who snuck the ball past the Spartan goalkeeper for the 1-0 lead.

For Koren it’s her fifth straight game with a goal, the longest consecutive goals streak in her career. Collinson for the second straight game earned an assist.

UNCG got a solid chance right before the end of the half as senior forward Chesney White took a shot from the throw in that curled around an ETSU defender before junior Jasmine Elliott (Preston, England) dove to her left to make the save.

A perfect combination of offense and defense helped ETSU take a 1-0 lead into halftime as the Bucs held the Spartans to just two shots on goal in the first 45 minutes. The ETSU offense was on the attack early and often rattling off 19 shots, seven of which were on goal. Sophomore Paola Roversi (Rieti, Italy) led the way with six shots, two being on goal.

Right out of the gate in the second half the Bucs widened their lead after beautiful touch passing from Collinson and Koren set up senior Sarah Zadrazil, (St.Gilgen, Austria) who rocketed a shot that went over the UNCG goalkeeper and into the top right of the net for the goal. It was Zadrazil’s fourth goal of the season with Collinson and Koren each earning the assist.

In the 59th minute, history repeated itself as Collinson served up a pass to Koren who for the second time on the afternoon blasted it into the back of the net to give ETSU a commanding 3-0 lead.

The Spartans got on the board in the 67th minute after a corner kick from Gabbi Charles was headed in by Chesney White. The goal ends the streak of 204 minutes in which the Bucs have held their opponent scoreless. However that was the only offensive attack UNCG could sustain as the Bucs controlled the ball the rest of the second half en route to a 3-1 victory.

"The technical quality, composure, speed of movement, quick incisive passing, defensive stability, intelligent decision making and speed of transition was all present in abundance today. I can't single anyone out as they were all brilliant today," said Sayers.

After giving up just two shots in the first half, UNCG responded in the second half tying ETSU in shots at nine apiece. Overall it was a much different story as the Bucs outshot the Spartans, 28-9, the second most shots by ETSU this season.  Roversi led the way for the Blue & Gold with seven shots, as she was accompanied by Koren for the team lead in shots on goal with three.

For Koren it was her fourth multi-goal game of her career with the last one coming against Alabama A&M last year where she scored four goals. Collinson recorded her first career multi-assist game and freshman Eleonora Goldoni (Cento, Italy) made her first collegiate appearance.

ETSU returns home for their conference home opener on Oct. 2 at 7:00 p.m. against Western Carolina at Summers-Taylor Soccer Stadium.