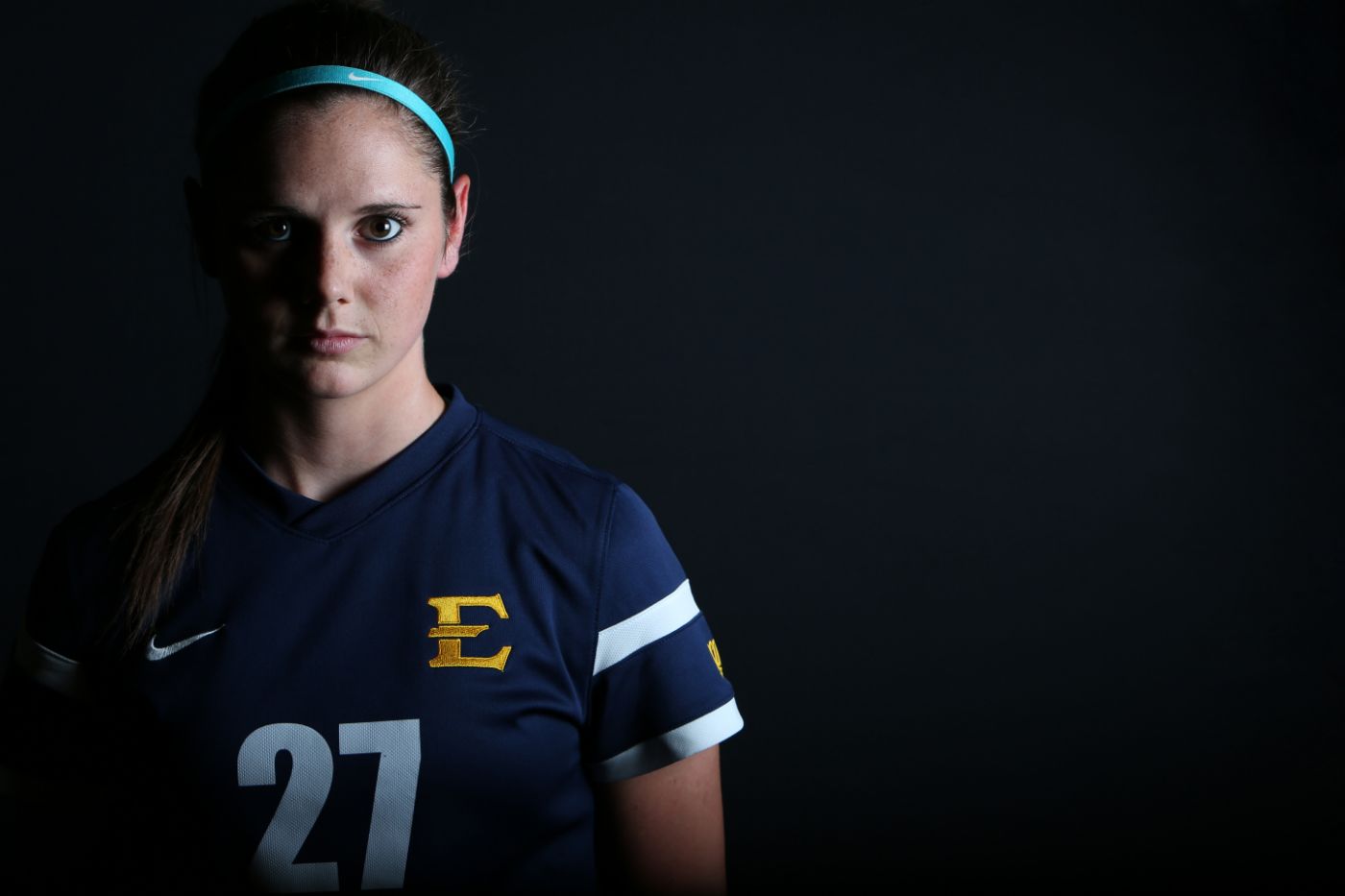 The normal balancing act of class, practice, meetings, games and a social life can be quite difficult for a student-athlete. Throw International travel into the mix and it becomes anything but normal.

For ETSU women’s soccer senior Sarah Zadrazil, the balancing of all these events has become somewhat a daily routine.

After the Bucs game against Marshall on Sept.11, the native of St. Gilgen, Austria boarded a plane a day later, traveling to the other side of the world, spanning 6,851 miles and taking approximately 14 hours. She met up with the Austria Senior National team in Kazakhstan for their first qualifying game of the European Championships. With the appearance of no jet-leg, Zadrazil played all 90 minutes in a 2-0 victory.

“The traveling is tiring especially when you play in Kazakhstan, but it wasn’t just any other game, it was the first qualifying game of the EURO Championships,” said Zadrazil. “These games give you an extra boost of confidence because you are playing against players that are professionals.”

As if there wasn’t enough traveling involved, Austria followed up their performance with another shutout, this time 3-0 over Wales before Zadrazil returned to Johnson City on Sept. 23 for ETSU’s conference opener at VMI.

Playing for the national team and traveling so much is not unusual for Zadrazil. She has been a part of Austria’s U17 club and was named a captain of Austria U19’s team. She has a wealth of international experience, as just last year in February, she helped her current senior team earn a draw in an international friendly over global power Spain. While it seems as if Zadrazil is comfortable playing for her international team, it didn’t always use to be that way.

“To juggle her commitment to ETSU and make that type of progress with the national team is extremely difficult but she makes it work,” said ETSU head coach Adam Sayers. “She is the best possible ambassador of our program and it’s an honor having her here as a Buccaneer.”

While experiencing moments that will be remembered for the rest of her life, Zadrazil knows that her role as a student-athlete doesn’t change.

“Sometimes it is hard to catch up with schooling when I am with the national team,” said Zadrazil. “But my goal is to be a good student first then think about sports.”

With an exercise major, Zadrazil has not only achieved success on the field but in the classroom as well, racking up multiple academic awards. Last fall she earned a spot on the 2014 NSCAA Women’s University Division Scholar All-South Region Second team and in the spring was named to the SoCon Academic Honor roll, maintaining a cumulative GPA of 3.90.

Playing a game that she has loved since the age of five, it’s no surprise that since she stepped foot on a field in Johnson City, Zadrazil has been collecting awards. As a freshman in 2012 she was named the Atlantic Sun Freshman of the Year after tying the ETSU single-season assist record, a record that she went on to break two years later. She was named one year later the A-Sun Player of the Year.

“It’s nice to win awards but I can’t sit back on anything, I still have to keep going,” Zadrazil said. “Individual awards come with team performance so you really can’t accomplish everything without your team.”

That individual and team performance synced together in 2014 as the Bucs won a program record 15 games and made it to the SoCon tournament semi-finals for the first time in school history. For Zadrazil, she broke the single-season record for assists with 20 en route to being named to the SoCon All-First team. Following the historic season, she was named to the NSCAA All-Southeast Region Second team, becoming the first player in team history to earn second team status.

“Sarah has a very rare combination of attributes. She is an extremely talented and intelligent player both technically and tactically,” said Sayers. “She is the epitome of how a player should carry themselves. She is so successful because she takes the right approach in everything she does.”

With every accomplishment to be had and at the top of the record book in virtually every offensive category at ETSU, Zadrazil still remains focused on team goals and accomplishments.

“I really don’t look at records or stats because that’s not how I grew up,” said Zadrazil. “It’s always a team effort, not just me. The best way to end my career would be to win a conference championship.”

Zadrazil’s goal of a conference championship is not so far out of reach this season as the Bucs return many potent offensive weapons along with a youth movement of 13 freshmen to the 2015 squad. It’s a team that has the potential to contend for a SoCon championship if the right pieces fall into place.

“We have a great team atmosphere this year and that reflects on the field as we win games together and have each other’s back through any situation,” said Zadrazil. “It’s that team spirit that makes us succeed.”

Championship or not, Zadrazil will leave behind a legacy that will go untouched for quite some time as she is the career leader in assists, game-winning goals, shots attempted and shots on goal. Once her time at ETSU comes to a close, Zadrazil seems to have no intentions of giving up the game she has loved for so long.

“I have played soccer since I was five, which is all I know how to do. It’s just a habit, every day I want to go out and play,” said Zadrazil. “I want to keep my national team starting spot and hopefully play for a good soccer team after my college career.”

Whether it’s traveling throughout the world while in school, scoring goals on the field or making the most of a college education, Zadrazil has unlocked the formula to balancing the challenges every college student-athletes faces each day.