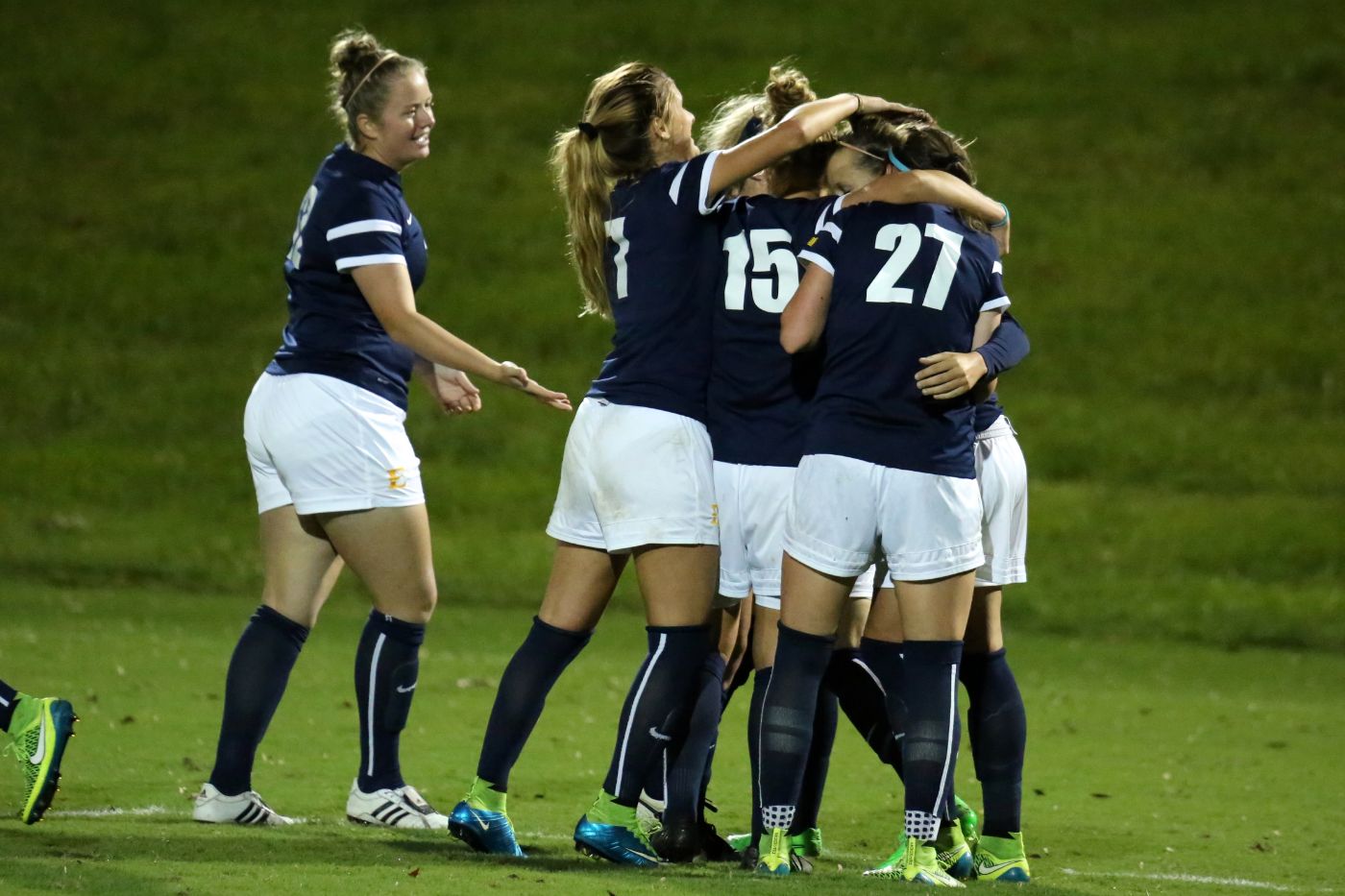 JOHNSON CITY, Tenn. (Oct.8, 2015) – In a pivotal weekend, the ETSU women’s soccer team looks to keep an unblemished record in Southern Conference play when they host Mercer on Friday Oct. 9 at 7 p.m. and The Citadel on Sunday Oct. 11 at 1 p.m.

Scouting the Bucs
ETSU comes into this weekend with a three-game win streak and an overall record of 8-4 and 3-0 in Southern Conference play. Last Friday, after giving up the early lead ETSU roared back with three unanswered goals including two in a five minute span in the second half to defeat Western Carolina, 3-1. It’s been a balanced attack for the Bucs this season as the defense has posted three shutouts while the offense ranks first in shots (207) and third in goals (23) in the SoCon. With a weekend sweep the Bucs will go 5-0 in conference play for the first time since 2011.

Looking for Lucky #7
Since Sept. 11, junior forward Simona Koren (Graz, Austria) has scored a goal in every game the Bucs have played, spanning six games. It is the longest consecutive goals streak in her career and was highlighted by a two-goal effort in a 3-1 victory over UNCG back on Sept. 27. Her performance helped her be named SoCon Player of the Week for Sept. 21-27, the third time in her career she has achieved that honor.

NCAA Rankings
ETSU ranks amongst the nation’s best in a few categories in the NCAA. The Bucs rank second in fouls per game (4.92) and 28th in shots per game (17.25).

Triple Joy
The Bucs are enjoying their second three-game win streak of the season, all of which came against conference opponents. The Bucs opened up the season 3-0 after defeating USC Upstate, Radford and Tennessee Tech.

Nobody’s More Clutch than Zadrazil
During the 2015-16 campaign senior Sarah Zadrazil (St. Gilgen, Austria) has been one of the more clutch players in the nation recording five game-winning goals, ranking fourth in the NCAA.

Inside the Numbers
It’s almost a sure thing when the Bucs score first as they are 7-1-0 this season when collecting the first goal. ETSU have also been road warriors this season posting a 5-1 record away from Johnson City, tied for the most road wins in program history. Friday nights are also kind to the Buccaneers, recoding a 4-2 record on Friday’s.

Freshman Movement
With 13 freshman on the 2015-16 squad, the young Bucs have produced surprising results, registering a total of three goals, nine assists and 15 points.

Scouting the Bears
With a 5-5-2 overall record and 2-1 in SoCon play the Mercer Bears are in third place behind ETSU in the SoCon standings coming into this weekend. The Bears are coming off a tough 1-0 loss against Samford at home as the Bulldogs scored late in the first half and were able to hold off the Mercer rally. The Bucs will have a challenge getting past Mercer goalkeeper Maggie Cropp who leads the SoCon with a 0.39 goals against average and .917 save percentage.

Last time out vs. Mercer: Bucs unable to fend off Mercer Rally, fall in 2OT
Last year ETSU maintained a lead for 77 minutes but the Bucs couldn’t hold off the Bears as they fell 2-1 in double overtime. The loss snapped the Bucs three-game winning streak. Koren scored the lone goal for the Buccaneers.

Scouting the Bulldogs
The Citadel will hit the road to take on Chattanooga before heading to Johnson City on Sunday. The Bulldogs are 0-2 in the SoCon and 1-11 overall. In their conference home opener, the Citadel fell to Samford, 5-0. The Bulldogs are led by Katherine Arroyo who leads the team in goals (2), assists (2) and points (6). Between three goalkeepers this season, The Citadel lead the conference in saves with 104.

Last time vs. The Citadel: Three goals in 30 minutes propels ETSU to victory
The Bucs mounted a comeback after trailing for most of the game to defeat the Bulldogs, 5-3 a season ago. The nation’s leading goal scorer at the time, Hannah Short recorded a hat trick including the game-winner in the 82nd minute.