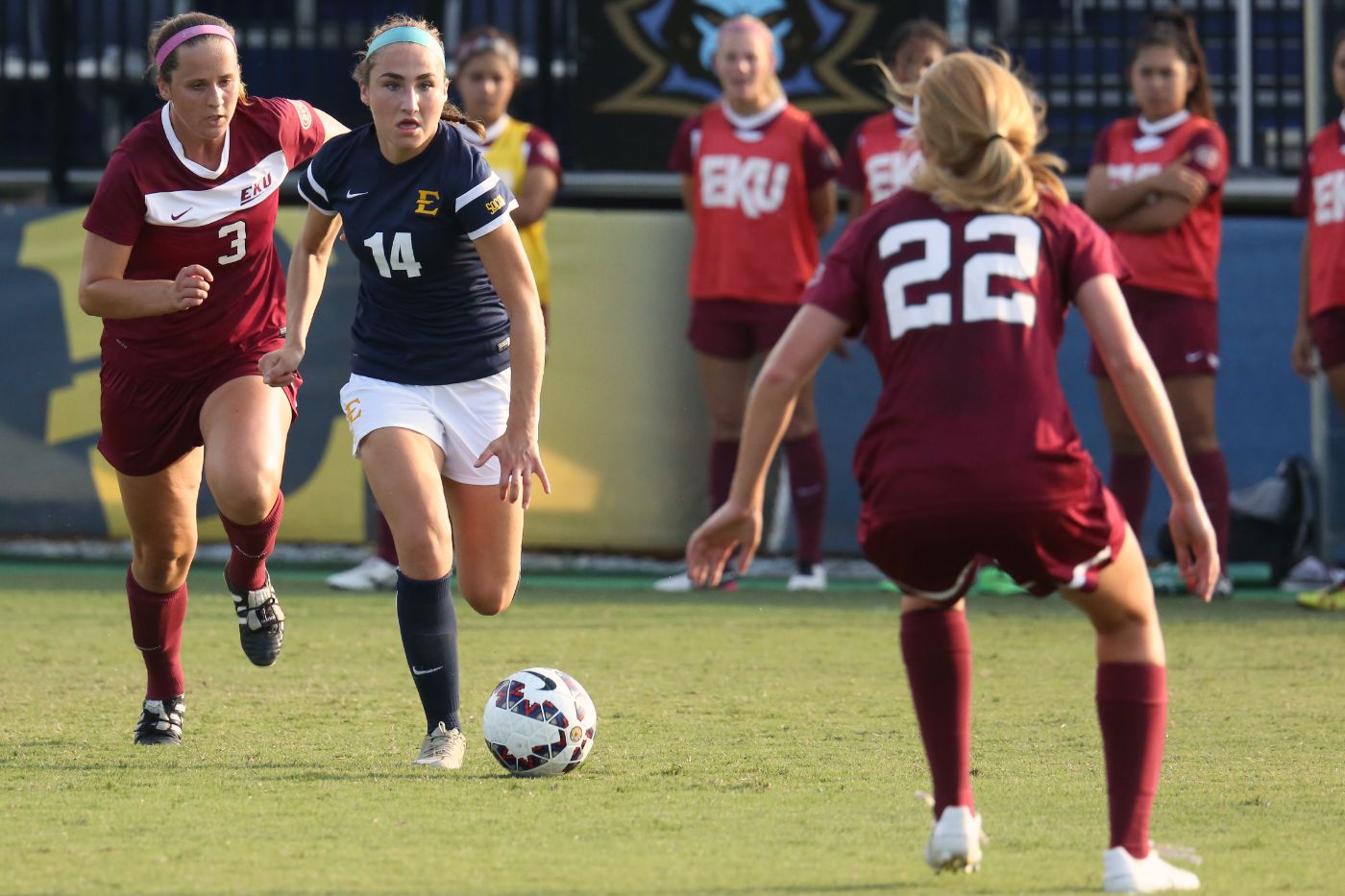 JOHNSON CITY, Tenn. (October 9, 2015) - With the rain pouring down at Summers-Taylor Stadium the ETSU women's soccer team held Mercer to a 1-1 draw on Friday night.

A rain-filled first half saw both teams struggle to keep possesion as neither team could produce any momentum the first ten minutes. With lightning in the area, it was Mercer who struck first in the 13th minute. After midfielder Maddie Clark broke free down the right side of the field, she crossed it into the box finding sophomore Valeria Bermeo who slipped it past junior goalkeeper Jasmine Elliot (Preston, England) to give the Bears an early 1-0 lead.

From that point on it was all ETSU, seemingly having the ball the rest of the half. That constant offense pressure paid off when junior Molly Collinson (Cramlington, England) scored her sixth goal of the season with the assist from senior Sarah Zadrazil (St. Gilgen, Austria). Zadrazil pushed the ball the through the middle of the Mercer defense, dishing the ball to Collinson on her right. Collinson proceeded to rocket the ball around the Bears defense into the top left corner of the net to tie the game up.

EtSU hoped that lighting struck again off the foot off sophomore Paola Roversi (Rieti, Italy) five minutes later as she blasted a shot that went just high and off the cross bar to go out of play.

The first half was dominated by ETSU outshooting the Bears 8-2 while holding a small advantage in shots on goal 3-2. Junior Simona Koren (Graz, Austria) led the Bucs in the first half with three shots.

It was a story of second half missed chances for both ETSU and Mercer as each team had chances to score the game-winning goal. The best chance for ETSU came in the 85th minute when the Bucs were awarded a free kick right outside the penalty box. Freshman Emily McKerlie (Dumfries, Scotland) looked to drop the ball into the left corner of the net but the Mercer goalkeeper was there for the save.
Mercer looked to win the game in the final minute as Clark raced down the left side and got off a shot that went wide left of the net to extend the game into overtime. No team was able to gain control in the second half with Mercer outshooting the Bucs in the half, 6-4.

The best chance came from Mercer in the first overtime, who off a corner kick was able to get it to Jamilah Tejan who somehow got a shot through the ETSU defense that went just left of the goal.

ETSU had the opportunity in the remaining seconds of the second overtime to send the fans who stuck it out through the rain home with a victory. Zadrazil raced down the field and got off a shot that went high into the air and was barely batted away by the Mercer goalkeeper as the time expired.

Overall, the Blue & Gold outshot the Bears 19-9 and had a considerable advantage in shots on goal, 7-3. Five different players had three shots for the Bucs with Collinson leading ETSU in shots on goal with two. It is the first time ETSU has recorded a draw since the 2013 season against Western Carolina.

The Bucs move to 8-4-1 overall and remain undefeated in Southern Conference play at 3-0-1. ETSU is back in action on Sunday, Oct. 11 at 1 p.m. when they take on the Bulldogs of The Citadel.