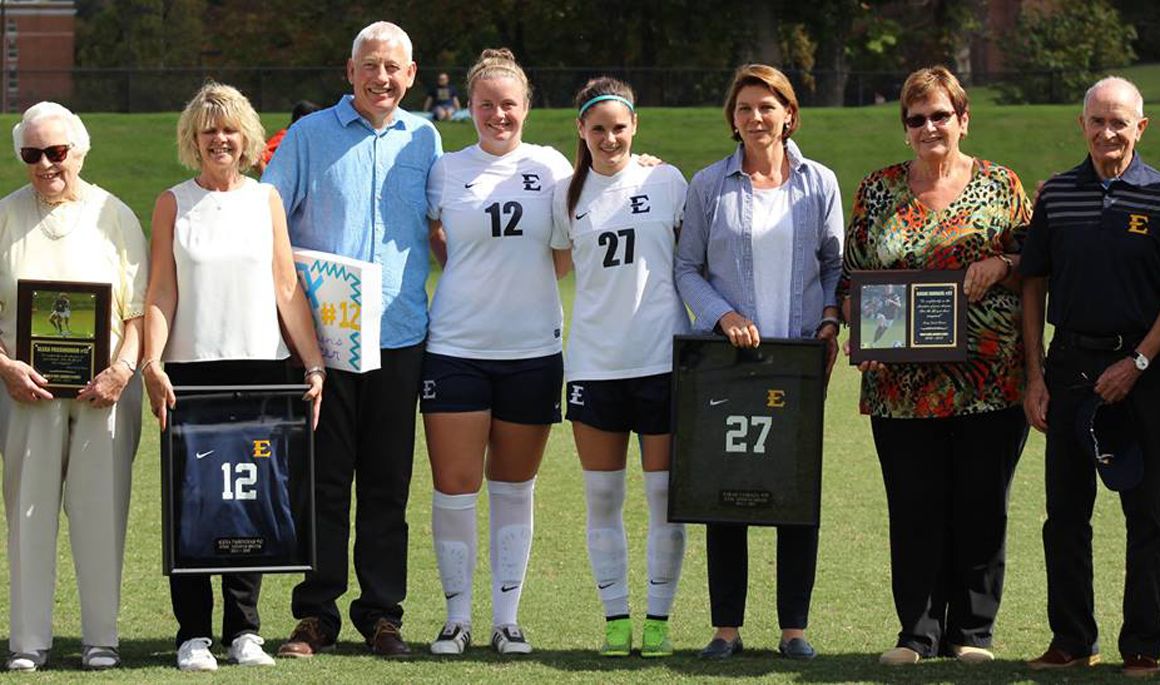 ETSU’s 8-0 victory over The Citadel was the largest margin of victory against a conference opponent in school history.

JOHNSON CITY, Tenn. (October 11, 2015) – The ETSU women’s soccer team on Sunday erupted offensively to remain unbeaten in Southern Conference play as the Bucs earned a commanding 8-0 victory against The Citadel.

Before the game the 2015 senior class of Alexa Passingham (Leicestershire, England) and Sarah Zadrazil (St. Gilgen, Austria) were honored for their accomplishments. The duo then proceeded to honor the fans with their play on the field as each scored two goals on the afternoon. The senior duo combined to score four goals and three assists with 12 shots.

"The focus was on the two seniors who have been absolutely magnificent for the program over the last four years and are exemplary in everything they do on and off the field, " said head coach Adam Sayers. "They are both perfect role models for any young player on how you should conduct yourself as a team member and as a professional in their approach to soccer, to class, to everything."

The Bucs started fast as Zadrazil scored on a pass from fellow senior Passingham just 27 seconds into the game. Zadrazil started off the game and proceeded to streak down the left side of the field where she moved around The Citadel goalkeeper to put it into the back of the net for her sixth goal of the season.

Just three minutes later Zadrazil was at it again, this time assisting freshman Irina Brutsch (Zurich, Switzerland) for her third goal of the season, giving ETSU an early 2-0 lead.

Passingham got in on the action scoring two goals in a matter of four minutes. Her second goal came off an assist from junior Molly Collinson (Cramlington, England) who made a beautiful pass to her left finding Passingham just outside the box. She then proceeded to rocket the ball into the upper left corner of the net, extending the Bucs lead to 4-0.

ETSU scored four goals in the first ten minutes of the game. The Blue & Gold headed into halftime with a 5-0 lead as the Bucs earned an own goal after a cross into the box was deflected off a Bulldog defender and into the net.

In the first half ETSU collected 20 shots, 11 of which were on goal. ETSU led the Bulldogs in corner kicks at the half, 5-1.

"We always emphasize starting fast and impose our game on the opposition," said Sayers.

The Bucs started the final 45 minutes just as quickly as the first half as Zadrazil netted her seventh goal of the year just four minutes into the second half. The St.Gilgen, Austria native raced down the right side of the field weaving through Citadel defenders, placing the ball in the back left corner of the net to give ETSU a 6-0 lead.

A pair of firsts was a result of the final two goals in the last 30 minutes of the game. In the 55th minute freshman Delaney Griffin (Franklin, Tenn.) scored her first collegiate goal after an assist from Zadrazil. Then it was a freshman duo hooking up for the eighth and final goal of the afternoon as freshman Michaela Daniels (Charlotte, N.C.) found freshman Rachel Harbin (Arlington, Tenn.)  for Harbin’s first collegiate goal, putting the finishing touches on a commanding 8-0 victory for the Blue & Gold.

Overall, the Bucs had a season high total of goals (8), shots (32) and shots on goal (17). Junior goalkeeper Jasmine Elliot (Preston, England) recorded her fourth shutout of the season and ninth of her career, tying the career record for shutouts in program history.

With four games left in the 2015-16 campaign the Bucs hit the road next weekend for a showdown at Furman on Oct. 16 before concluding the weekend on Oct. 18 at Wofford. ETSU returns to Johnson City for the final regular season weekend, hosting Samford on Oct. 23 and rival Chattanooga on Oct. 25.

"There are some very big games coming up as they are all in the SoCon as it is a very good league," said Sayers. "Every game is difficult and challenging, we have to take it one game at a time and prepare as best we can."