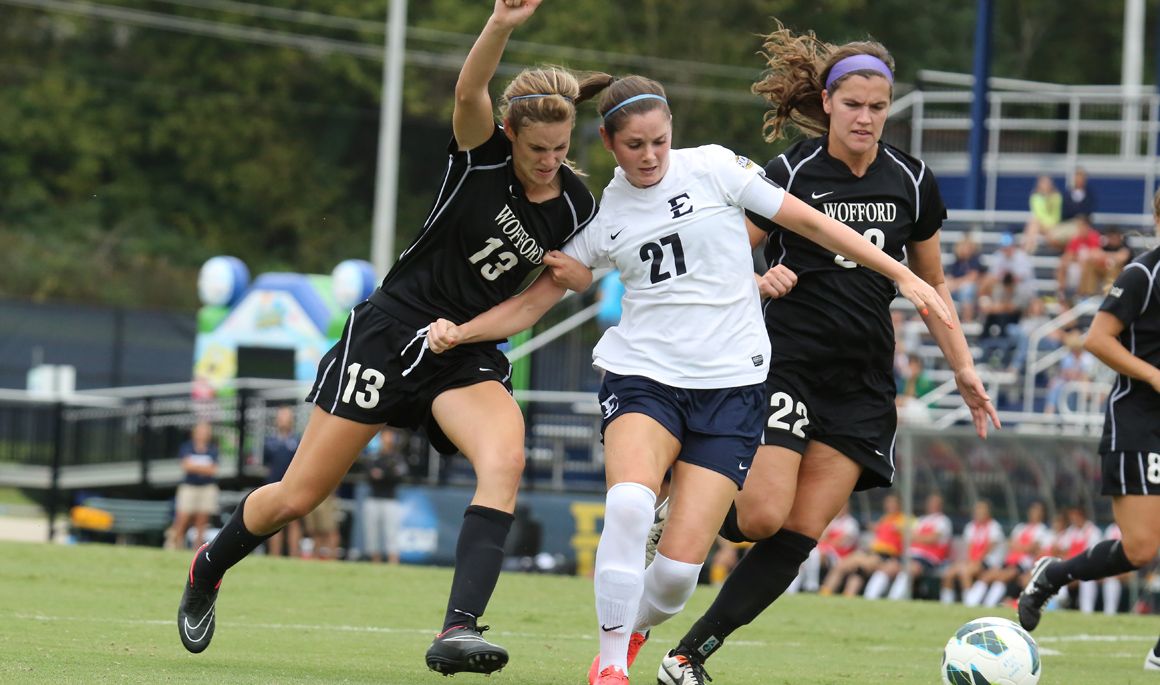 Bucs will be back at home next weekend for their final two games of the regular season.

SPARTANBURG, S.C. (October 18, 2015) – Despite recording 22 shots, eight of which were on goal the ETSU women’s soccer team fell in heartbreaking fashion to Wofford, 1-0 on Sunday afternoon. The Terriers scored in the 87th minute to secure the victory.

The game was scoreless until the 87th minute when Wofford capitalized off an ETSU turnover that gave the Terriers a 1-on-1 opportunity within the box. Wofford’s Hannah Washko got off a shot in the 1-on-1 match-up that hit the cross bar and fell directly to Haley Younginer who snuck the ball in-between an ETSU defenders legs for the game-winning goal.

It’s the second conference loss for the Bucs and first time since 2013 ETSU has lost consecutive conference games. ETSU is now 4-2-1 in Southern Conference play and 9-6-1 overall.

"The ladies played very well in the second half vs Furman, and all game vs Wofford. We couldn’t ask for any more regarding effort, application, work ethic, and them never giving up or becoming frustrated," said head coach Adam Sayers. "It just wouldn’t go in for us. We dominated possession and created several chances. Credit and congratulations to Furman and Wofford."

After being blanked 3-0 on Friday night against Furman, ETSU came out on the attack in the first half against Wofford during Sunday afternoon’s contest registering 12 shots, with four on goal in the first 45 minutes.

It seemed as if the Terries were going to strike first when Rachel Fenner recorded the only shot on goal for Wofford in the first minute of action. Off a corner kick, Fenner found the ball in the middle of the box where she got off a shot that went straight at junior goalkeeper Jasmine Elliot (Preston, England) for her only save of the half.

The best chance for ETSU came in the 31st minute off the foot of the team’s leading goal scorer senior Sarah Zadrazil (St. Gilgen, Austria). After a foul on Wofford, the Bucs were awarded a free kick just to the left of the box where Zadrazil blasted a shot through the Terrier defense that bounced off the cross bar. The ball bounced right off the bar and onto the foot of junior Molly Collinson (Cramlington, England) who recorded a shot that went just high and out of play.

In the first half, ETSU dominated offensively recording 12 shots to Wofford’s three. The Bucs had four of those shots on goal with the Terriers recording just one on goal. Zadrazil led the Blue & Gold in the first half with four shots, half of which were on goal.

Prior to the game-winning goal, the second half was dominated once again by ETSU rattling off ten shots to Wofford’s three. The Bucs had their best opportunity to score of the second half in the 68th minute when Collinson headed a ball off a cross that went right into the arms of the Wofford goalkeeper.

Zadrazil and junior Paola Roversi (Rieti, Italy) got off the most shots for the Bucs at five a piece. Zadrazil led the way with three shots on goal.

ETSU comes home for their final two matches of the 2015-16 season as they take on Samford on Oct. 23 at 7 p.m. inside Summers-Taylor Stadium. The Bucs finish off the regular season on Sunday Oct. 25 against rival Chattanooga at 2 p.m.

Stay up to date with ETSU Women’s Soccer by following the Bucs on Twitter @ETSUWSoccer  or Facebook.