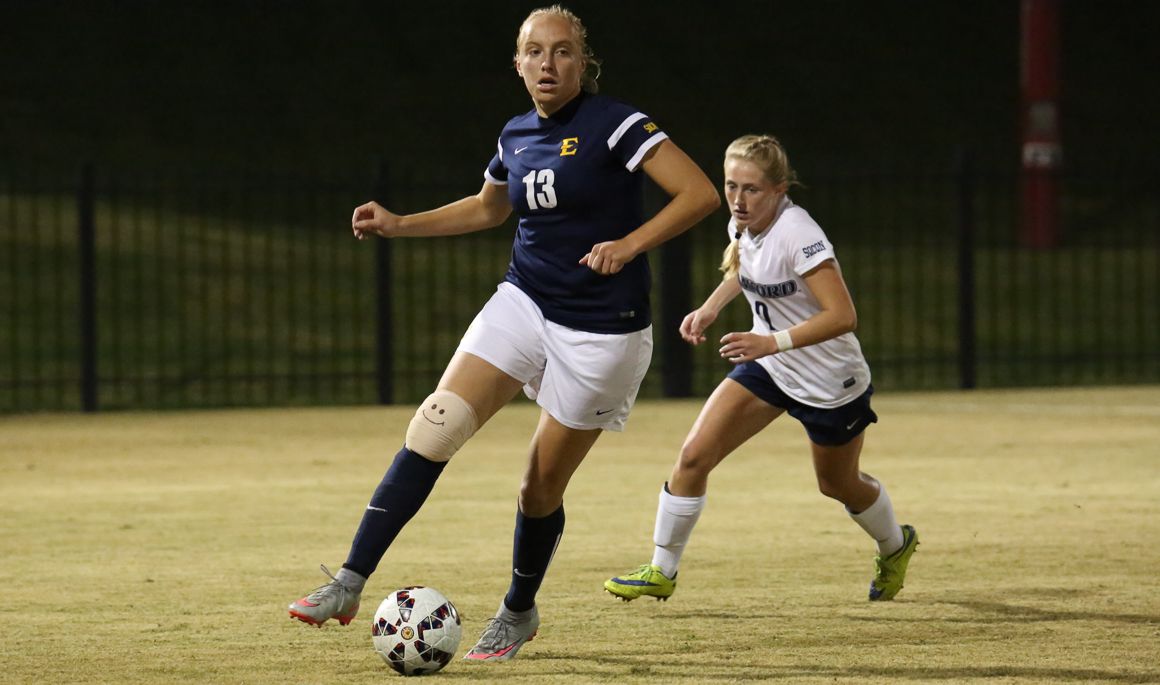 JOHNSON CITY, Tenn. (October 23, 2015) - For the second straight game, the ETSU women's soccer team let up a goal in the 86th minute as they fell to Samford, 1-0 in a heartbreaking loss on Friday night inside Summers-Taylor Stadium.
"I am very proud of the girls tonight. We put in one of our best performances of the season.Samford was organized, well-coached, and is very dangerous going forward," said head coach Adam Sayers. "It was an exciting, open game, played in great spirit. They are worthy champions and we congratulate them."
In the first half neither team was able to find the back of the net despite multiple opportunities by both squads. The best chance for Samford came in the 20th minute when Samford's Jermaine Seoposenwe raced up the right side of the field and tried to get off a shot but was denied by junior goalkeeper Jasmine Elliot (Preston, England). Elliot came out of the box, stopping Seoposenwe before getting off a quality shot.
ETSU countered in the final five minutes of the first half getting off two great shots in the middle of the box. It was junior Molly Collinson (Cramlington, England) who weaved through multiple Samford defenders to get off a shot that was blocked. After the block, the ball landed right onto the foot of sophomore Paola Roversi (Rieti, Italy) who also rocketed a shot that went off a Samford defender.
It was scoreless heading into halftime as the Bucs outshot the Bulldogs, 6-4 with each team registering a shot on goal. Collinson led the Blue & Gold in the first half with two shots.
The Bucs came out strong in the second half recording four shots in the first ten minutes. ETSU had their best chance of the game in the 66th minute after a cross left junior Cecilia Re (Busnago, Italy) wide open in the middle of the box. Re got off a clear shot that missed just left of the net to keep the game scoreless.
Samford was finally able to get on the board in the 86th minute as a cross from the right side by junior Taylor Borman found junior Malcanisha Kelley for the game-winning goal.  After the cross, Borman was able to get the ball over the fingertips of Elliot for her 11th goal of the season, giving Samford the 1-0 victory.
"We defended very well throughout. Our transition play was excellent, and our decisions in possession were very good," said Sayers. "We couldn't have asked any more of the players. We'll regroup and prepare for a big game on Sunday."
Overall the Bucs outshot the Bulldogs, 13-6 with each team recording three shots on goal. Both Collinson and Re registered three shots while freshman Irina Brustch (Zurich, Switzerland) led the team in shots on goal with two.
ETSU will return to action on Sunday Oct. 25 at 2 p.m. when they host rival Chattanooga in their final game of the regular season.
Stay up to date with ETSU Women’s Soccer by following the Bucs on Twitter @ETSUWSoccer or Facebook.
ETSU fans wanting to receive Buccaneer news, score updates, in-game promotions and much more sent to their mobile device can do so by signing up for “Buc Updates.” Click here to sign up today!
For more information on Buccaneer women’s soccer, visit ETSUBucs.com and click on the women’s soccer page.