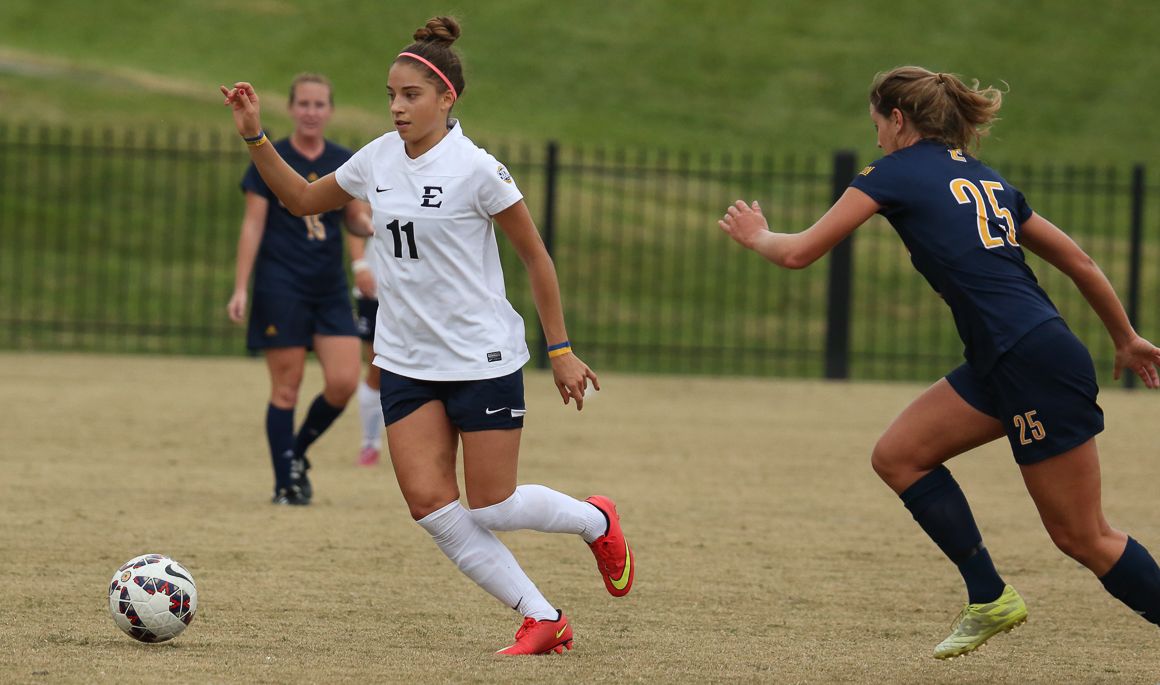 The Bucs lock up the No.5 seed in the upcoming SoCon Tournament

JOHNSON CITY, Tenn. (October 25, 2015) - On Sunday afternoon inside Summers-Taylor Stadium the ETSU women's soccer team fell in their regular season finale to Chattanooga, 3-1. The Bucs are the No.5 seed heading to the Southern Conference Tournament.

After being held scoreless the last three games the Bucs got back on track in the scoring department just three minutes into the game. With help from junior Simona Koren (Graz, Austria) and freshman Irina Brutsch (Zurich, Switzerland) it was freshman Eleonora Goldoni (Ferrara, Italy) scoring her first collegiate goal in the top right corner of the net to give ETSU an early 1-0 lead.

The Mocs struck back in the 30th minute off the foot sophomore Peyton McCollum. McCollum received the ball in the middle of the box and got spun around before finding the ball and getting off a shot that got just past the diving Jasmine Elliott (Preston, England) for McCollum's second goal of the season, tying the game up.

It was a tie game heading into halftime although ETSU outshot UTC, 6-2. The Bucs also held a slim advantage in shots on goal at 3-2. Freshman Delaney Griffin (Franklin, Tenn.) led the Bucs in the first half with two shots including a shot in the 33rd minute that bounced off the right post.

Chattanooga grabbed the lead in the 57th minute as McCollum raced up the left side and got off a shot that bounced off Elliot and landed right in front of the net where McCollum put the ball into the empty net to give the Mocs the lead.

McCollum recorded the hat trick just 10 minutes later after a long pass down the field bounced right on to her foot where she proceeded to strike the ball into the upper right corner of the net. Chattanooga held on for the 3-1 victory after five shots from the Bucs in the final 15 minutes.

Overall its the fourth straight game in which ETSU has outshot their opponent with the Blue & Gold registering 17 shots to Chattanooga's eight. Elliot stood tough inbetween the pipes for the Bucs making four saves on seven shots. Goldoni led ETSU in shots with four and shots on goal with two.

The Bucs end the regular season at 9-8-1 overall and 4-4-1 in the Southern Conference. ETSU has the No.5 seed in the upcoming SoCon Tournament and will travel to No.4 seed Mercer on Saturday, Oct. 31 with the match starting at 7:30 p.m. It is the second meeting between the two teams this season with the Bucs and Bears playing to a draw in Johnson City a few weeks ago.

Stay up to date with ETSU Women’s Soccer by following the Bucs onwitter @ETSUWSoccer or Facebook.