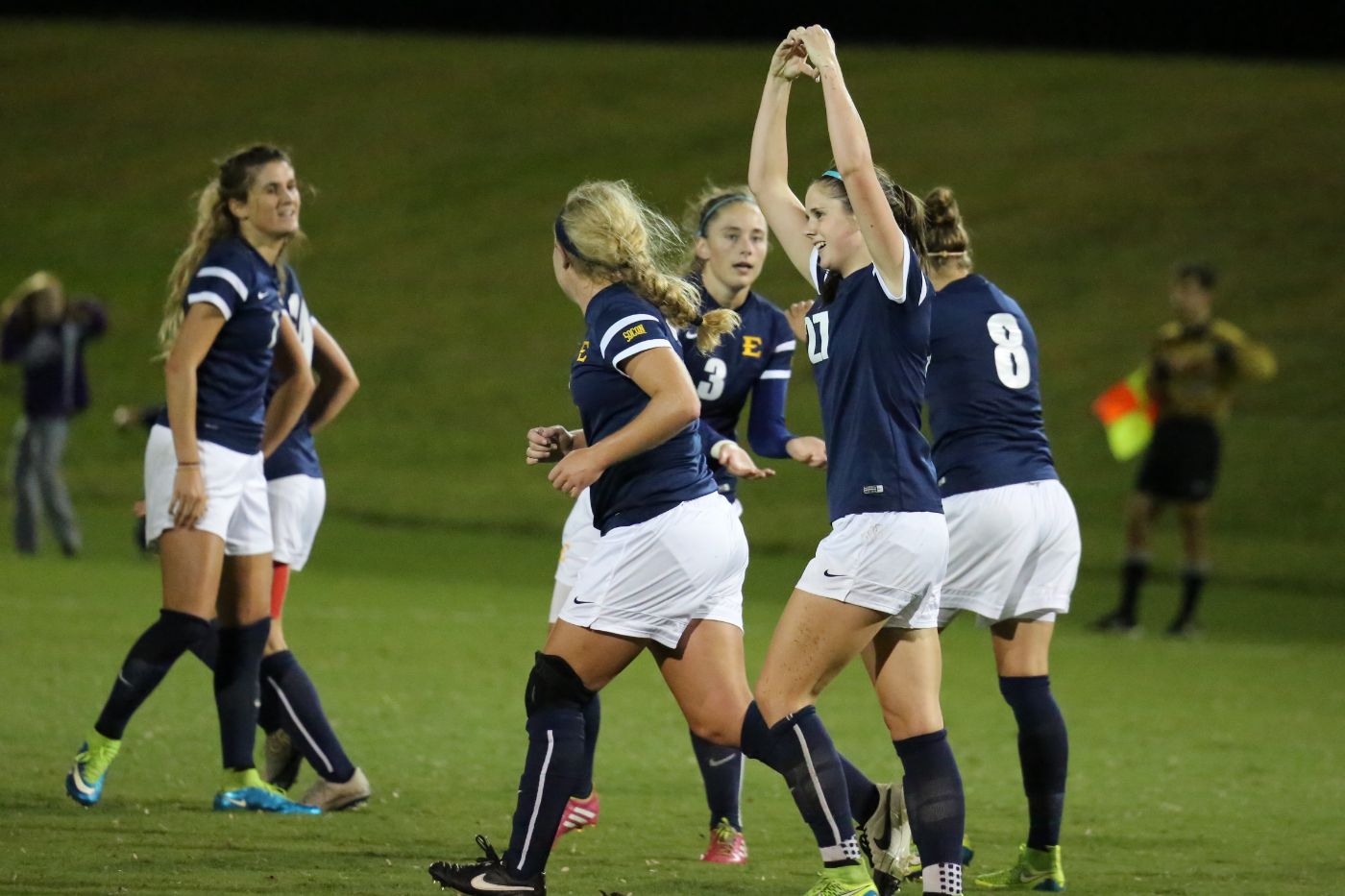 Macon, Ga. (October 31, 2015) – The ETSU women’s soccer team was unable to complete a comeback as they fell to Mercer, 3-2 in the Southern Conference Quarterfinals on Saturday night.

It was the exact start ETSU was looking for as they on the board first just 10 minutes into the quarterfinal match-up. Senior Sarah Zadrazil (St. Gilgen, Austria) weaved through the Mercer defense up the right side and got off a shot that was partially blocked and trickled towards the right side of the net. It was then freshman Eleonora Goldoni (Ferrara, Italy) who handled the bouncing ball and rocketed a shot that went off the right post and off the cross bar before finally crossing the line for her second goal of the season. Goldoni has now scored a goal in back-to-back games.

The Bucs maintained their lead until the 42nd minute when Mercer tallied the equalizer. A free kick just inside the box helped Mercer’s Katelyn Dimopoulous earn her seventh goal of the season as she lofted the ball just over ETSU junior goalkeeper Jasmine Elliot (Preston, England) to knot the game up at 1-1 heading into halftime.

Both teams played each other equally well in the first 45 minutes as ETSU held a slim advantage in both shots, 10-9 and shots on goal, 5-4. Mercer led in corner kicks, 6-3. Zadrazil led the Buc offense in the first half taking five shots, with three on goal.

Mercer struck quickly in the second half as midfielder Sarah Daane netter her third goal of the season in the 53rd minute. Off another free kick just to the left of the box Daane placed the ball into the top right corner of the net giving Mercer the 2-1 lead.

However, after the goal the Bucs rattled off five shots including two quality chances on goal. The Bucs had an opportunity after a corner kick from freshman Emily McKerlie (Dumfries, Scotland) traveled to the right of the goal where the ball found Goldoni looking to put in the header. Goldoni looked for the bottom right corner of the net but it was headed away by the Mercer defense.

Just moments later after Mercer tried to clear, Zadrazil found the ball after a long pass from midfield in which she curled around a Mercer defender and blasted a shot on goal. Mercer’s goalkeeper Maggie Cropp made the diving save to her right to keep control of the lead.

The Bears extended their lead in the 75th minute as a long pass found forward Sydney Brogen who shot the ball off the bounce into the back of the net to give Mercer a 3-1 lead.

ETSU tried their best to complete the comeback as freshman Fiona Dodge (Pontypool, Wales) earned her first collegiate goal in the 84th minute off a long shot that slipped by Cropp to cut the lead to 3-2. The Blue & Gold had another chance just two minutes later as McKerlie once again placed a beautiful corner kick to Goldoni who got off a header that went right into the arms of Cropp. After the Bucs rattled off five shots in the final five minutes it was not enough as Mercer held on for the 3-2 victory to advance to the SoCon Tournament semifinals.

The Bucs have now outshot their opponents in 12 straight games as they outshot Mercer 24-18 while holding a small margin in shots on goal, 11-10. Zadrazil led ETSU with seven shots, four on goal while recording one assist. Elliot in between the pipes made seven saves.