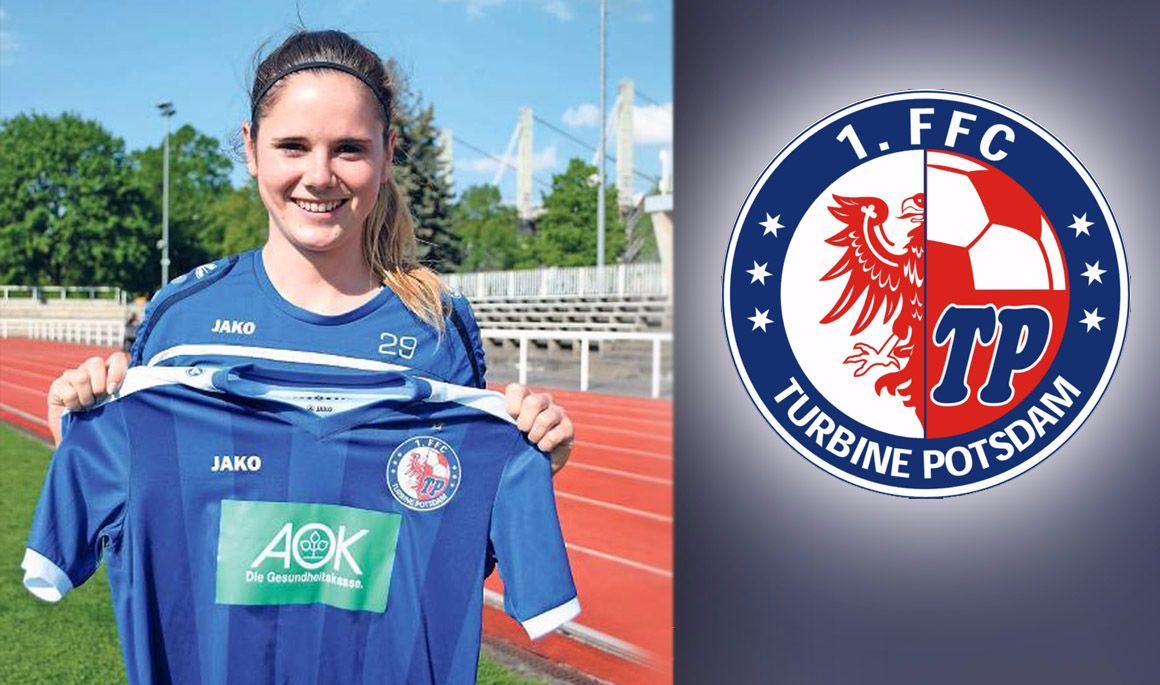 Courtesy of: Potsdamer Neueste-Nachrichten
Zadrazil signs professional contract with FFC Turbine Potsdam
JOHNSON CITY, Tenn. (June 1, 2016) – On Wednesday former ETSU women's soccer player Sarah Zadrazil (St.Gilgen, Austria) signed a two-year contract with the German Frauren-Bundesliga club, Turbine Potsdam.
"It's a dream come true because I wanted to become a professional soccer player since I was a little girl and I got this incredible opportunity to play for one of the best teams in Europe," said Zadrazil. "I am really looking forward to start this new chapter of my life."
Turbine Potsdam has been one of the most successful teams in Germany the past ten years winning three consecutive German Bundesliga titles from 2009-11. In 2010, Turbine Potsdam won the Champions League and followed up that performance by reaching the final the next season.
"I hope that I can help the team be one of the top teams in the league again," said Zadrazil. "I hope to become a better player from practice to practice."
Zadrazil brings a wealth of international experience to the club recording 34  appearances and four goals for the Austria National Team. In early March, Zadrazil helped the national team capture the 2016 Cyprus Cup for the first time in club history.
"We are extremely proud of Sarah. She had a great career at ETSU and leaves a magnificent legacy," said ETSU women's soccer head coach Adam Sayers. "Sarah has a very bright future in the game, at both the club and national team level. We wish her all the best in the next chapter of her professional career at Potsdam."
Her time at ETSU was spent on re-writing the record books and acquiring accolades as Zadrazil was named 2016 Southern Conference Player of the Year while also earning NSCAA Third Team All-Southeast honors. The St. Gilgen, Austria native is ETSU's career leader in points (101), assists (48), game-winning goals (11), shots attempted (213) and shots on goal (106).
"I have had an amazing four years at ETSU and have become better and better every year because of my coaching staff and teammates," said Zadrazil. "Being a part of ETSU women's soccer has been such an amazing experience and made me a better player in every aspect. I am very thankful for everything my coaches, teammates and the university has done for me."
Stay up to date with ETSU Women’s Soccer by following the Bucs on Twitter @ETSUWSoccer or Facebook.
ETSU fans wanting to receive Buccaneer news, score updates, in-game promotions and much more sent to their mobile device can do so by signing up for “Buc Updates.” Click here to sign up today!
For more information on Buccaneer women’s soccer, visit ETSUBucs.com and click on the women’s soccer page.