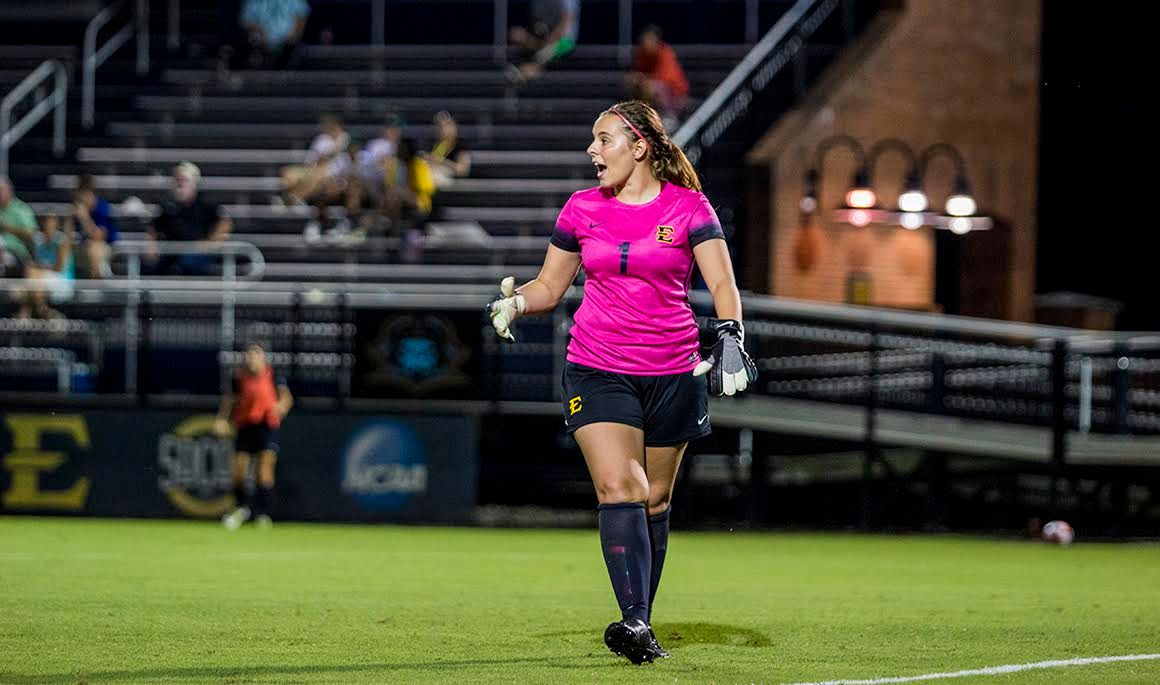 With the 1-0 shutout victory, senior goalkeeper Jasmine Elliott (Preston, England) recorded her 10th career shutout, giving her the most shutouts in ETSU history. Last season on the road at USC Upstate, Elliott broke the career record for wins. On the night, Elliott recorded just three saves.

“It’s great to get the shutout but collectively it is a team effort and today defensively we worked really well as a unit,” said Elliott. “It’s always great to get a shutout and a win.”

Both the Buccaneers and the Spartans battled in the first half with neither team able to get the ball into the back of the net through the first 45 minutes. ETSU had multiple opportunities at the end of the half when sophomore Fiona Dodge (Pontypool, Wales) rocketed a shot that went just high and right of the diving USC Upstate goalkeeper.

In the first half the Bucs outshot the Spartans nine to six.

It was a dominating second half for the Bucs as they outshot USC Upstate, 13-2 with USC Upstate goalkeeper Brooke Bailey having to make 10 saves.

“Very important to start the season off the way we did,” said head coach Adam Sayers. “After the end of a good preseason, it was good to be rewarded in a victory in the opening game.”

ETSU got on the board in the 53rd minute when freshman Georgia Allen (Suffolk, England) scored her first collegiate goal off of the assist from sophomore Irina Brutsch (Zurich, Switzerland). Brutsch raced up the left side of the field when she crossed the ball into the box finding Allen who with multiple defenders around placed the ball in the back left corner of the net.

“It was a brilliant experience,” said Allen. “I just happen to be in the right place at the right time.”

From that point on the defense took over as the Bucs allowed just two shots in the second half to secure the 1-0 victory. ETSU improved their overall win streak against the Spartans to six games while recording their third straight opening night victory. The Blue and Gold tallied 22 shots on the night compared to the eight put up by USC Upstate.

ETSU improves their record to 1-0 on the 2016 season and will play the Highlanders of Radford on Aug.23 inside Summers-Taylor Stadium. The match is set for 7:00 p.m.