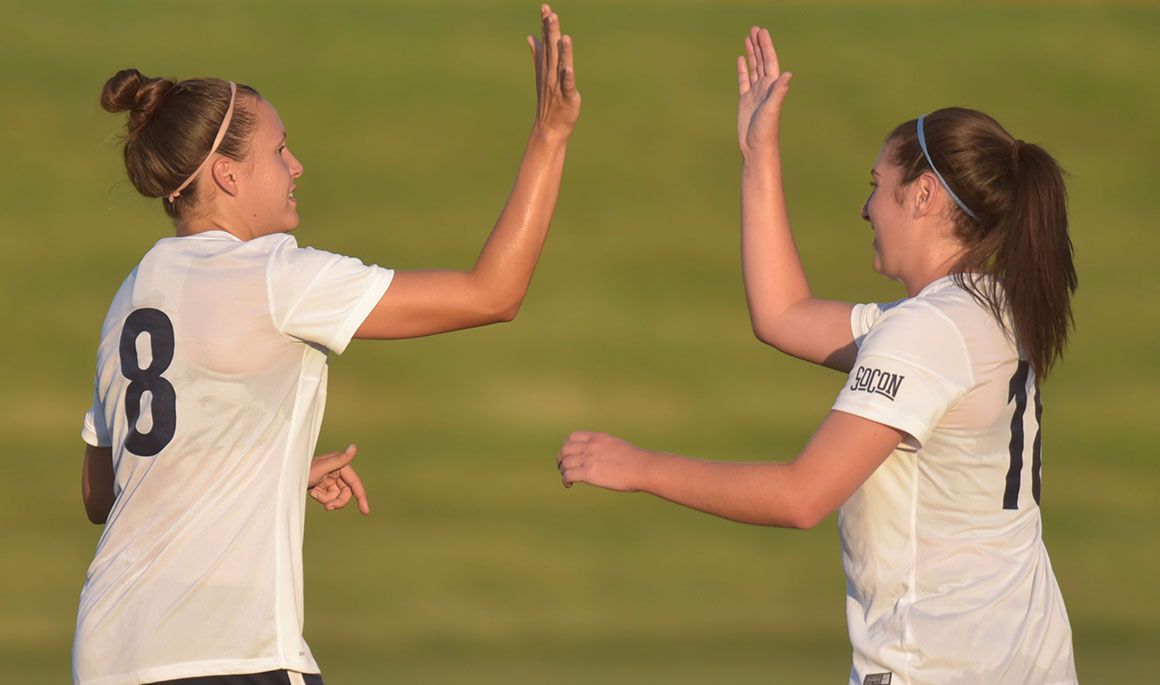 JOHNSON CITY, Tenn. (August 23, 2016) –  The ETSU women's soccer team posted yet another shutout victory on Tuesday night as they defeated Radford, 1-0 inside Summers-Taylor stadium.
"Very happy with the performance today, we knew it was going to be a tough game as they (Radford) are always a good challenge for us" said head coach Adam Sayers.
It was a slow start for both teams to start the game as neither team was able to sustain an offensive attack. Through the first 15 minutes, the Bucs and the Highlanders combined for just one shot on goal.
The blue and gold got on the board in the 16th minute as senior Simona Koren (Graz, Austria) recorded her first goal of the season. After the Highlanders kicked the ball out, sophomore Emily McKerlie (Dumfries, Scotland) took the corner kick and placed it perfectly for fellow sophomore Eleonora Goldoni (Ferrara, Italy).
Goldoni proceeded to fire a header off the crossbar that landed right on to the foot of Koren who placed the ball in the back left corner of the net to give ETSU the 1-0 lead. For the second straight game the Bucs took a lead into halftime while outshooting the Highlanders, 4-1.
"It was key to get the early goal because it forced Radford to come out which allowed us to find some more space on the field," said Sayers.
With ten minutes gone by in the second half, Radford was able to get their best chance of the night off the foot of senior defender Miranda Carlson. After dribbling the ball up the right side past the ETSU defense, Carlson had a wide open look at the net but rocketed a shot that went wide left to keep ETSU ahead.
ETSU's best chance came late in the second half when Koren just missed netting her second goal of the contest. Freshman Georgia Allen (Suffolk, England) blasted a shot off a Radford defender that landed right in front of sophomore Irina Brutsch (Zurich, Switzerland) racing up the right side. Brustch crossed the ball into the box where Koren came within inches of kicking the ball and grabbing her second goal of the night.
"It was a good team performance," said Koren. "We played our game, kept possesion and came away with the victory."
Ultimately, ETSU held off multiple Radford offensive attacks the final five minutes to give the Bucs their second straight shutout victory. The Buccaneers outshot the Highlanders, 10-5 including six to four in the second half. Koren, Goldoni and Brustch each had two shots on goal while senior Jasmine Elliott (Preston, England) recorded her second shutout of the season and the 11th of her career.
It's the third straight season the Bucs have began the season 2-0. ETSU will travel to Knoxville, Tenn. on Sunday, Aug. 28 for their first road contest of the 2016 campaign against in-state foe, Tennessee. Match is set for 6:00 p.m.
Stay up to date with ETSU Women’s Soccer by following the Bucs on Twitter @ETSUWSoccer or Facebook.
ETSU fans wanting to receive Buccaneer news, score updates, in-game promotions and much more sent to their mobile device can do so by signing up for “Buc Updates.” Click here to sign up today!
For more information on Buccaneer women’s soccer, visit ETSUBucs.com and click on the women’s soccer page.