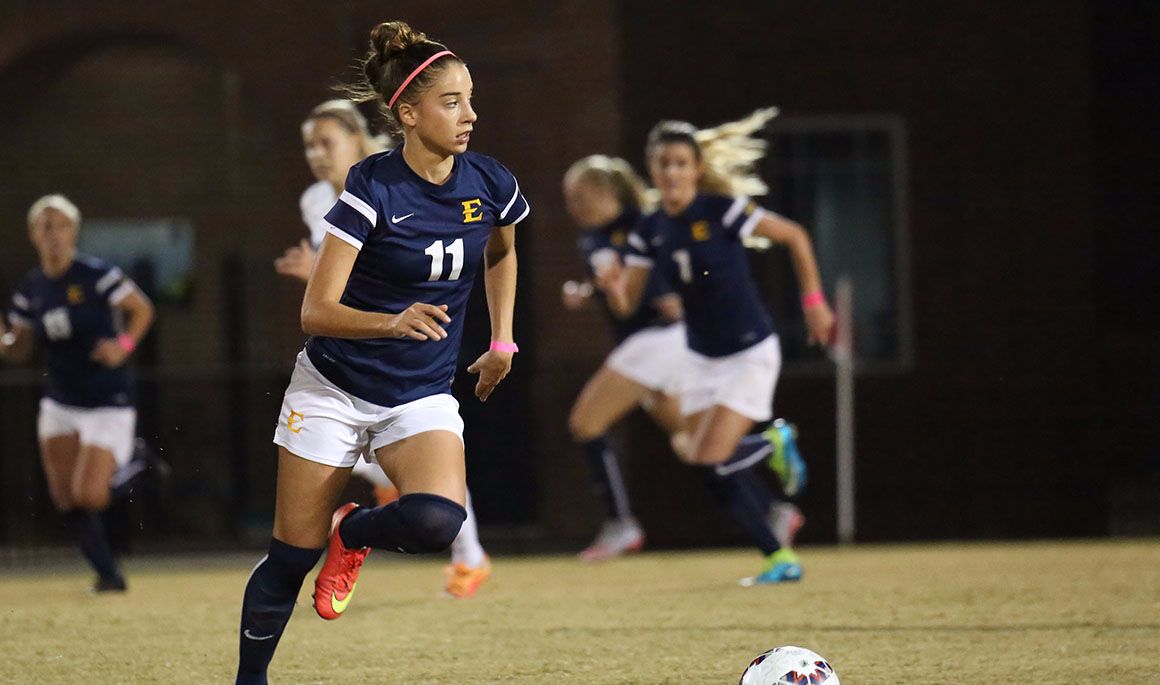 ETSU rallies late but falls on the road to Tennessee, 3-2
ETSU at Tennessee | August 28, 2016
Related Links

KNOXVILLE, Tenn. (August 28, 2016) –  Sophomore Eleonora Goldoni (Ferrara, Italy) recorded her first collegiate multi-goal game as the ETSU women’s soccer team battled in the second half but fell on the road to Tennessee, 3-2 on Sunday night.

It was a competitive first 25 minutes between the Bucs and Vols inside Regal Soccer Stadium as neither team was able to control the ball and gain possession. The best chance for ETSU came in the 25th minute when sophomore Irina Brutsch (Zurich, Switzerland) led a three on one break down the left side of the field but the Tennessee defense defended the ball well and kicked the ball out.

Tennessee struck first in the 30th minute when Tennessee forward Maya Neal scored her second goal of the season. After a cross into the box Neal moved just left of the ETSU defender to give the Vols the early 1-0 lead.

The Vols widened their lead just two minutes later off a corner kick as Tennessee’s Danielle Marcano headed a ball that went off the crossbar but Marcano proceeded to follow the ball and bounce it off the left post to give UT the 2-0 lead.

Towards the end of the half, ETSU rattled off four shots in the matter of minute while holding Tennessee to no shots the final five minutes. The blue and gold were outshot 12-9 with both teams making three saves in the first half

ETSU came storming out of the gate in the second half which led to the first of two Eleonora Goldoni goals. In the 55th minute senior Simona Koren (Graz, Austria) headed a ball into the box that went right to Goldoni who placed the ball in the back left corner of the net from six yards out. It was Goldoni’s first goal of the season.

Tennessee recorded their third goal of the night off a free kick in the 58th minute that just snuck into the left corner of the net to widen the Volunteer lead to 3-1.

Goldoni recorded her second goal of the season and the night just seven minutes later, thanks in large part to a Tennessee foul that led to a penalty kick. After Brutsch was fouled just inside the box on the right side, Goldoni placed the ball in the top right corner of the net with ease to cut into the Tennessee lead.

ETSU was unable to capitalize on multiple chances late in the second half as they fell on the road to Tennessee, 3-2. It’s the first loss of the season for the Bucs as their overall record drops to 2-1. In what was the fifth meeting between the two programs, it was the first time ETSU has ever scored against the Volunteers. Goldoni led the Bucs with four shots while senior Cecilia Re, sophomore Pauline Vienne and freshman Georgia Allen each recorded two shots.

The blue and gold continue their road trip next weekend when they take on Davidson on Sept.1 followed by a trip to Marshall on Sept.4.