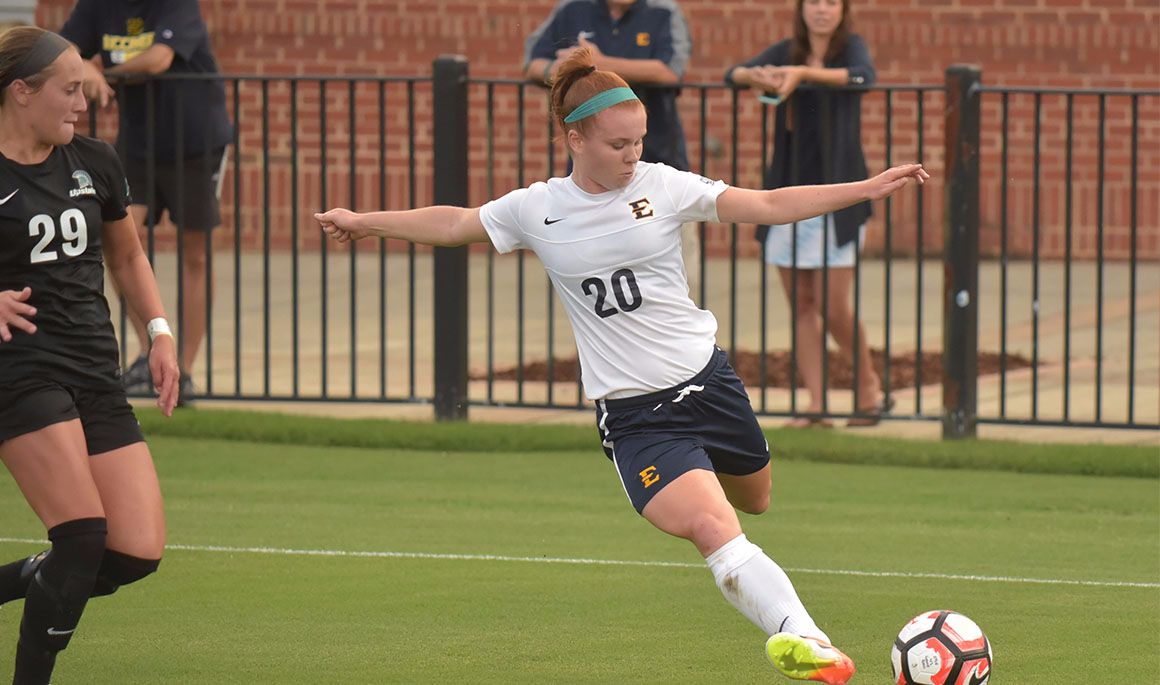 Bucs travel to Davidson and Marshall this weekend
Related Links

JOHNSON CITY, Tenn.  (August 31, 2016) – It will be the final two games of their brief three-game road trip as the ETSU women’s soccer team heads to Davidson, N.C. and Huntington, W.V. to square off against Davidson and Marshall this weekend.

Scouting the Bucs
ETSU heads into the final two games of their brief three game road swing with an overall record of 2-1-0. After posting back-to-back 1-0 shutouts to begin the season, the Bucs fell on the road in their last contest at Tennessee, 3-2.

Good as Goldoni
Sophomore midfielder Eleonora Goldoni (Ferrara, Italy) had a breakout game against Tennessee last Sunday, scoring two goals on four shots. For Goldoni, it was the first multi-goal game of her career.

Road Warriors
ETSU begins a tough road stretch as seven of their next nine games are on the road.

Bucs host the SoCon Tournament
For the first time in school history, the ETSU women’s soccer program will host the 2016 Southern Conference Women’s Soccer Tournament. The tournament begins with the semi-final matches on November 4, followed by the championship game on Nov.6. The tournament will be played inside Summers-Taylor Stadium. For more information, CLICK HERE.

Scouting the Wildcats
Davidson heads into Thursday’s contest with an overall record of 2-2-0 and is currently riding a two-game win streak. After dropping the first two games of the season, the Wildcats have bounced back with two straight wins over Gardner-Webb and fellow SoCon opponent, Wofford. Davidson is led by senior Maggie Body who leads the Wildcats in goals (2) and points (4).

Scouting the Thundering Herd
Marshall has compiled an overall record of 1-2-0 in 2016 falling to Big Ten opponents Purdue and Michigan. Before the Bucs and Thundering Herd get together on Sunday, Marshall will play host to IUPUI on Sept.2. Freshman forward Jordan Sackaris leads Marshall with three goals on the season while junior goalkeeper Emily Moreland was recently named Conference USA Goalkeeper of the Week.