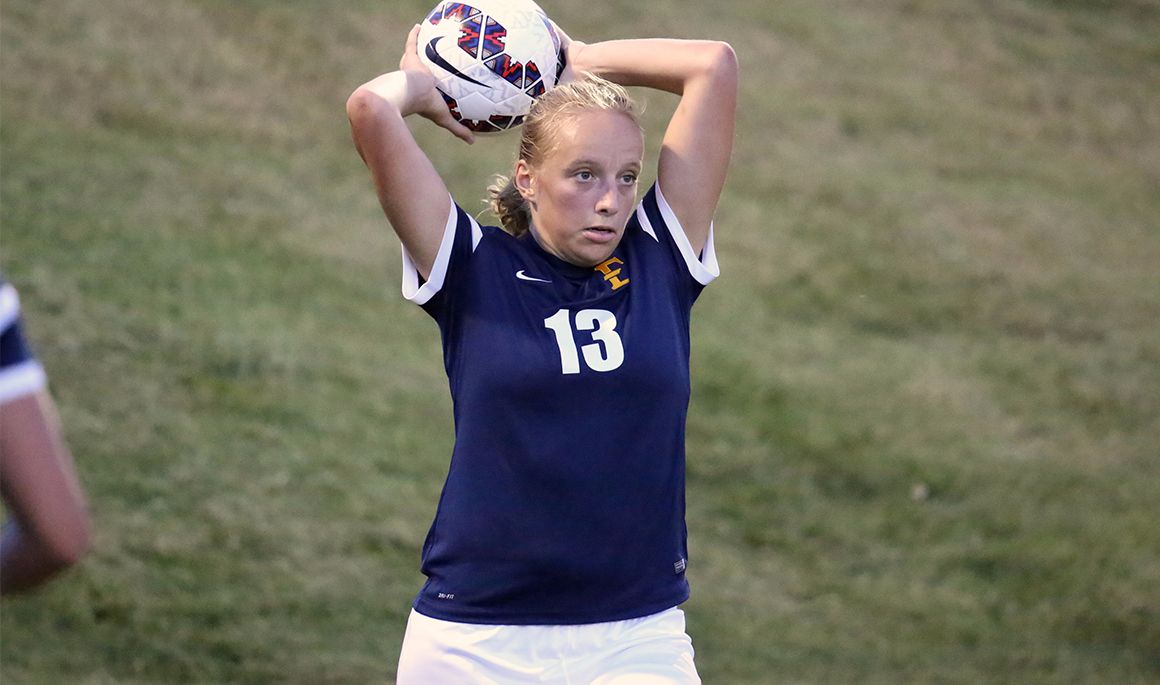 DAVIDSON, N.C.  (September 1, 2016) – Despite a career night from sophomore Irina Brutsch (Zurich, Switzerland) the ETSU women’s soccer team suffered a 4-3 loss on the road at Davidson on Thursday night.

Brutsch recorded her first goal of the season to go along with a career-high two assists en route to a career-high four point night for the Bucs. ETSU tied a season-high with 22 shots, 11 of which were on goal.

The game remained scoreless until the 27th minute when Davidson’s Seeley Yoo scored the first of her three goals on the night to give the Wildcats a 1-0 lead.

Eight minutes later the Buccaneers responded as Brutsch netted her first goal of the season. After a give-and-go with fellow sophomore Eleonora Goldoni (Ferrara, Italy), Brutsch blasted a shot that went into the far right corner of the net to tie the game.

It didn’t take long for the Wildcats to regain the lead as Seeley Yoo scored her second goal of the night off a rebound from teammate Virginia Jesseleson. With ten seconds remaining in the first half, Davidson extended their lead, this time off the foot of Ashley Finke. A shot by Davidson’s Allison Gray was blocked by senior goalkeeper Jasmine Elliott (Preston, England), however Finke was right there for the rebound to give Davidson a 3-1 lead heading into halftime.

In the first half, the Bucs recorded nine shots, five of which were on goal. Goldoni led ETSU at the half with three shots while also compiling an assist.

The second half couldn’t have started much better for the Buccaneers as just a minute into the half ETSU got on the board. On a set play, Brustch executed a beautiful touch pass to senior Cecilia Re (Busnago, Italy) who rocketed a shot into the back right corner of the net to cut into the Wildcats lead.

Seeley Yoo completed her first collegiate hat trick in the 62nd minute to give Davidson the 4-2 midway through the second half.

Senior Simona Koren (Graz, Austria) logged her second goal of the season in the 72nd minute thanks to the assists from Brutsch and sophomore Fiona Dodge (Pontypool, Wales). Dodge forwarded the ball to Brutsch who crossed it into the box and onto the foot of Koren who scored with ease and cut the Davidson lead to 4-3.

Moments later Goldoni had an opportunity to net the equalizer on a penalty kick but Davidson goalkeeper Becca Ravitz made one of her eight saves on the night to secure the 4-3 victory.

It was an offensive explosion for the Bucs who recorded 22 shots, tied for the most this season. Koren led the Bucs with six shots, four of which were on goal while Goldoni was second on the team with four. In the second half alone, ETSU recorded 11 shots, scoring two goals. The loss drops the Bucs overall record to 2-2.

ETSU will conclude their early season three-game road trip on Sunday, Sept.4 when they head to Huntington, W.V. to take on Marshall. Match is set for 4 p.m.