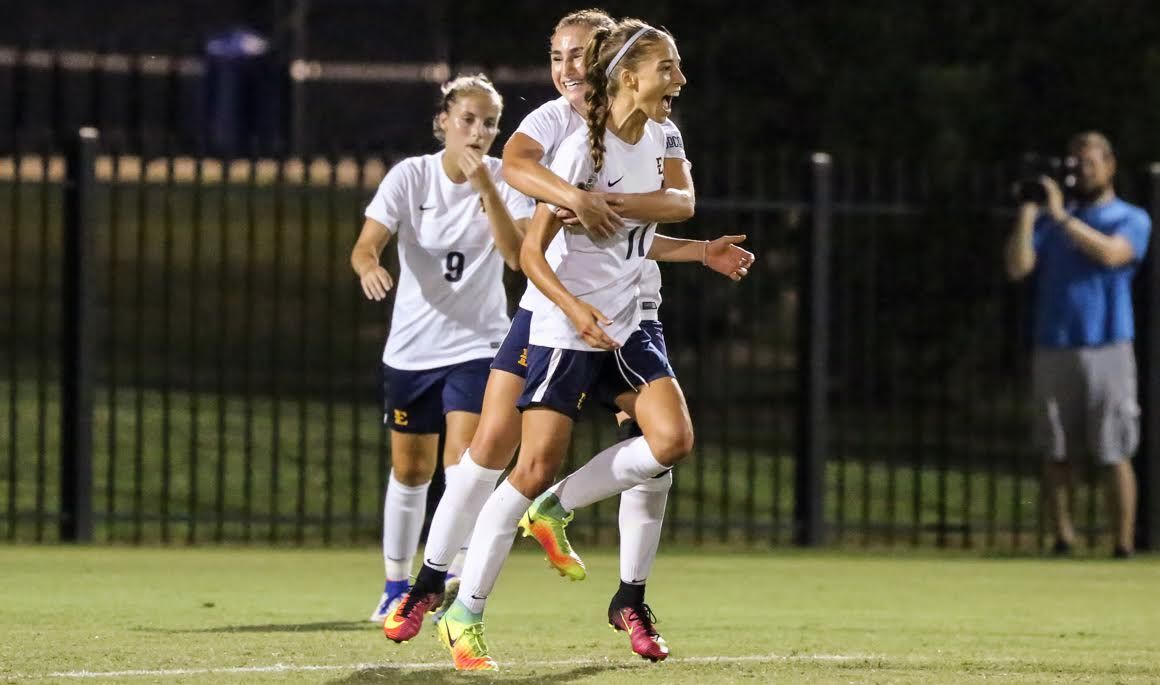 JOHNSON CITY, TENN.   (September 6, 2016) – For the first time since 2004 the ETSU women’s soccer team has started the season 3-0 at home with three shutouts as they defeated Winthrop, 2-0 on Wednesday night inside Summers-Taylor Stadium.

“Im really happy about this game and the way we started,” said Goldoni. “I’m happy and proud of the team for the win tonight.”

Goldoni got the blue and gold going in the first half scoring in the 31st minute. After a foul outside of the box, sophomore Irina Brutsch (Zurich, Switzerland) executed a perfect free kick that bounced off the head of sophomore Fiona Dodge (Pontypool, Wales) and onto the foot of Goldoni who put the ball in the back left corner of the net to give ETSU the 1-0 lead.

For Dodge it was her first collegiate assist while Brutsch recorded her fourth assist on the season, widening her lead in the Southern Conference.

The trio almost connected on another goal in the final seconds of the first half as Brutsch took a corner kick that bounced off both the head of Goldoni and Dodge and out of play. Taking a 1-0 lead into halftime, ETSU has now extended their record to 3-0 when leading at the half. In the first half the shots were tied at 3-3 a piece.

“Players were absolutely brilliant tonight, coming off a tough three game road trip, it was important for us to get back to winning ways and protect the home field advantage that we have,” said head coach Adam Sayers. “We played well and controlled possession and was patience and the girls did that excellent tonight against a dangerous Winthrop team.”

In the second half, Winthrop came out on the attack registering five shots with three of them coming in the first 13 minutes of the half.

It wasn’t until the 86th minute when Goldoni recorded her second goal of the night off of a penalty kick. Senior Simona Koren (Graz, Austria) raced up the right side of the field and was fouled inside the penalty box which led to Goldoni slipping the ball past the Winthrop goalkeeper and into the back right corner of the net.

With the victory ETSU snaps its three-game losing streak and improves its overall record to 3-3. ETSU is now 25-10-2 all-time at home against non-conference opponents since 2007 and the first time the Bucs have started 3-0 at home since 2014.

“It’s great to have three shutouts at home, it doesn’t happen very often,” said sophomore Emily McKerlie (Dumfries, Scotland). “We have had a bump in the road with a few road losses but to come back and play the way we did tonight was very important.”

ETSU hits the road once again on Sunday, Sept.11 as they head to Cookeville, Tenn. to take on the Golden Eagles of Tennessee Tech.