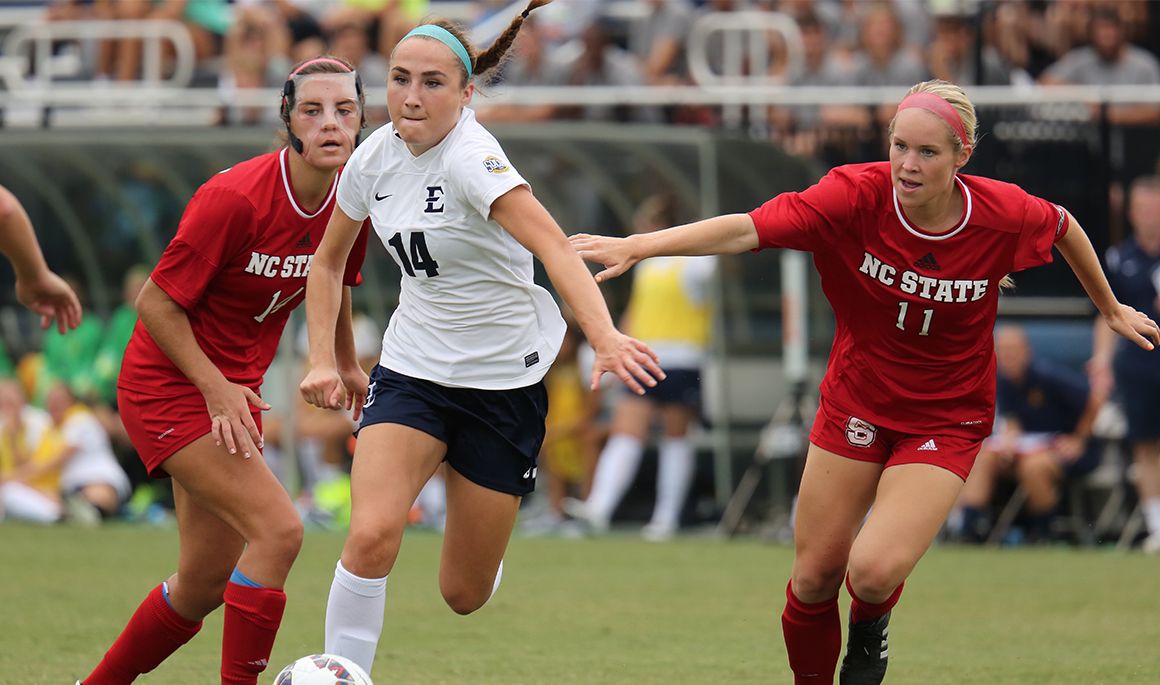 COOKEVILLE, Tenn. (September 11, 2016) – The ETSU women’s soccer team will have to wait a little longer to clinch their first road victory of the season as they came away with a 1-1 draw against Tennessee Tech on Sunday night.

Senior Molly Collinson (Cramlington, England) recorded the lone goal for the Buccaneers in the 50th minute. A cross from the right side by sophomore Emily McKerlie (Dumfries, Scotland) set up Collison’s first goal of the season as she outraced two Tennessee Tech defenders to push the ball into the back right corner of the net. It was McKerlie’s first assist of the 2016 campaign.

"Really happy with the effort and appreciation of the players today," said head coach Adam Sayers. "It was a difficult away game against a strong team."

The Golden Eagles just eight minutes later recorded the equalizer to knot the game up at 1-1. Off a corner kick from Karigan Owens, midfielder Abi Gearing came streaking from the left side into the middle of the box and booted the ball into the back left corner of the net past a diving Jasmine Elliott (Preston, England).

Tennessee Tech had an opportunity in the final three minutes of the game to net the game-winner as they rattled off three consecutive shots in the box. However, Elliott was able to make all three saves and keep the game tied at 1-1. Elliott on the night had a season-high nine saves, one shy of her career-high.

"We defended well and scored a great goal just after halftime. We knew their set play delivery was of a high quality and we defended it well for the most part," said Sayers. "After they scored the equalizer it was an entertaining open game and couldn't have asked for any more from the team today."

In the first overtime, both teams were cruising offensively rattling off four shots a piece. The best chance for ETSU came in the 94th minute when Collinson dropped a pass off to freshman Georgia Allen (Suffolk, England) who rocketed a shot from just outside the box that went right.

Overall the blue and gold had 15 shots with nine on goal compared to Tennessee Tech’s 26 shots, 10 of which were on goal. In the second half alone, both teams combined for 21 shots with 15 of them coming from the Golden Eagles.

Collinson led the way for the Buccaneers with three shots, two on goal and the lone goal in the 50th minute. Senior Cecilia Re (Busnago, Italy) also registered three shots with two on goal. It is just ETSU’s fourth draw in the last four seasons and first since Oct.9, 2015 vs. Mercer.

ETSU’s next game will be inside Summers-Taylor Stadium when the Bucs entertain the Bulldogs of Alabama A&M on Friday, Sept.16 at 7:00 p.m. It will mark the final home game for the Bucs in the month of September and final home game before ETSU embarks on a season-long four game road trip.